Alstom will build 14 Coradia iLint fuel-cell trains (earlier post) for the Local Transport Authority of Lower Saxony (Landesnahverkehrsgesellschaft Niedersachsen, LNVG). The trains, which will convey travellers between Cuxhaven, Bremerhaven, Bremervörde and Buxtehude from December 2021, will replace the diesel multiple units of the transport authority Elbe-Weser-Verkehrsbetriebe (evb) and will reduce the pollutant emission in daily service to zero.

The hydrogen for the trains will be provided by the Linde Group. The companies also signed a 30-year maintenance agreement. The Coradia iLint can cover up to 1,000 kilometers (621 miles) with one tank fill, and can reach a maximum speed of up to 140 km/h (87 mph). 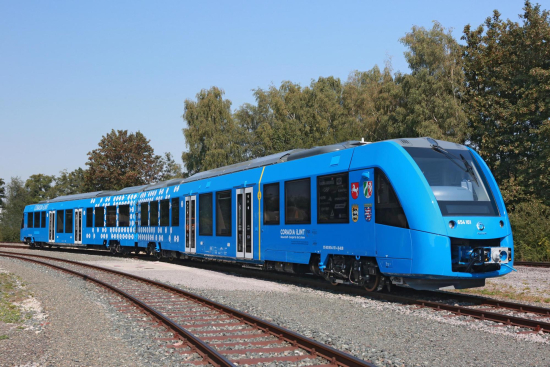 A Coradia iLint prototype will begin pilot operation in the evb network in spring 2018 together with a second vehicle.

In Wolfsburg, Transport Minister Lies handed over the official notice of funding to the two LNVG chiefs Hans-Joachim Menn and Klaus Hoffmeister. LNVG will purchase the Coradia iLint trains for its own vehicle pool and will then rent them to a railway operator. The fuel cell trains are going to be maintained by Alstom in the evb depot in Bremervörde, which will be extended for this purpose.

From now on there will be a real alternative to diesel trains in non-electrified rail transport. Hydrogen and fuel cells are an ideal combination for climate protection as well as for the energy and transport revolution. They allow the storage of energy and emission-free travelling on rail. We fund innovative technologies and make a sustainable contribution to the energy revolution in the transport sector. I am pleased that Alstom will build the trains in Lower Saxony, thus further strengthening their production site in Salzgitter.

Emission-free, energy-efficient and cost-effective – trainsets with fuel cell drive are an environmentally friendly alternative to diesel locomotives. To strengthen the industrial site of Lower Saxony, we want to fund LNVG’s project by investing around 8.4 million euros. The funds are to be provided from the National Innovation Program for Hydrogen and Fuel Cell Technology (NIP 2).

The Linde Group will erect and operate the first hydrogen filling station for trains in Bremervörde. The necessary investment costs will be estimated at around €10 million (US$11.6 million) funded by the Federal Government. LNVG will rent the premises for the filling station from evb and will make it available to Linde AG, which will also be responsible for the operation and construction permit. The on-site production of hydrogen by electrolysis and by means of wind energy will be planned in a later phase of the project.

This could be one of the best solution to electrify trains without costly overhead cables. An H2 station every 1000 Km, to produce and distribute clean H2 produced by electrolysis with Hydro-Wind-Solar clean energy is doable.

Too bad that American and Canadian operators are not involved nor interested? Transporting Alberta's oil to mid and eastern Canada requires many diesel/electric trains/day and creates loads of pollution and GHGs.