GTT (Gaztransport & Technigaz), an engineering company expert in containment systems with cryogenic membranes used to transport and store liquefied gas, in particular LNG (Liquefied Natural Gas), has been chosen by the shipyard Hudong-Zhonghua Shipbuilding and by shipowner CMA CGM for the design of cryogenic tanks for nine LNG-fueled container ships. (Earlier post.)

The membrane tanks for the nine giant container ships will be built by Hudong-Zhonghua, who will also be in charge of building five vessels, Shanghai Waigaoqiao Shipbuilding Co., Ltd. building the other four. The deliveries of the nine vessels will take place between the end of 2019 and the end of 2020.

This contract is the result of more than four years of development made by GTT in this market segment. These Sea Giants will be able to carry 22,000 containers each, instead of 21,000 containers for the biggest container ships currently in operation. GTT will design the LNG fuel tanks, which represent a capacity of 18,600 m3 per ship. The Mark III membrane insulation system developed by GTT was chosen for its space optimization allowing a maximum usage of cargo capacity. 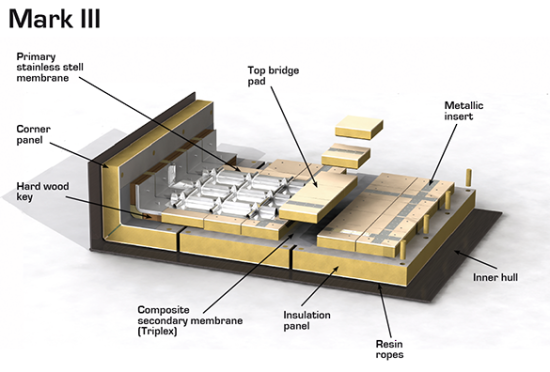 The Mark III membrane system is a cryogenic liner directly supported by the ship’s inner hull. This liner is composed of a primary metallic membrane positioned on top of a prefabricated insulation panel including a complete secondary membrane.

The two independent insulation spaces are continuously flushed with nitrogen gas. The integrity of both membranes is permanently monitored by detection of hydrocarbon in the nitrogen. The orthogonal corrugation pattern enables the membrane to accommodate any thermal or hull deflection stresses and to work under the fatigue limit thus providing outstanding lifetime.

Because of low stress on the primary membrane, prefabricated foam corner panels can be used to anchor the membrane to the hull thus minimizing thermal flux.

3) and the plywood covering both sides of the panels—for an even load distribution—allow the insulation to withstand high impact pressures and absorb the energy resulting from liquid motion.

The low thermal conductivity of the foam and of the corners results in a thin insulation; thus maximizing the cargo capacity for any ship external constraints.

It is amazing what those Chinese firms can do in 2 years?