The first generation Saf-T-Liner C2 Electric Bus comes equipped with the PowerDrive 7000ev powertrain from EDI, which provides 100-160 kWh of battery capacity and a baseline of 100-miles range and an operating range up to 100-miles between charges, with an option for a higher range with additional battery packs.

Among its features is the PowerSuite vehicle control software and the PowerTracker telematics and diagnostics system that tracks bus location and provides real-time monitoring of potential issues.

Integrated exportable power enables the transfer of stored energy on board the bus for use in opportunistic V2G applications.

With a market share of 38.7%, Thomas Built Buses is the leading manufacturer of school buses in North America (YtD 08/2017). Thomas Built Buses is a member of the Daimler global truck group and draws upon Daimler’s worldwide resources for technology and innovations. Fuso, a Daimler company, recently introduced the FUSO eCanter, the first all-electric light-duty truck in series production, with sales in the US, Japan and Europe.

The powertrain for the Blue Bird Vision Electric Type C school bus is supplied by ADOMANI, with drivetrain and vehicle control software developed and produced by technology partner EDI.

Blue Bird’s all-new Type C bus features up to 100 miles of electric range, with a full charge time of under 8 hours by utilizing a Type 2 charger and a battery capacity of 150 kWh. This announcement follows a recent unveil of Blue Bird’s Type D All American Rear-Engine Electric school bus at the STN tradeshow in July 2017, powered by the same ADOMANI/EDI partnership. 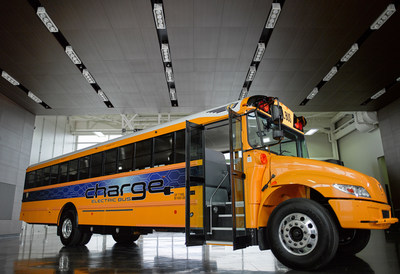 The new chargE concept electric school bus incorporates a common group electric drivetrain from Volkswagen Truck & Bus that is quiet, does not produce any emissions, and can be built to address any school bus customer’s specific requirements. The range of the chargE can exceed 120 miles, while the powertrain can deliver up to 260 kW (about 349 peak horsepower).

At the inaugural North American Commercial Vehicle Show in Atlanta this past September, Navistar and Volkswagen Truck & Bus Group announced plans to develop an electric-powered, medium-duty vehicle for Navistar’s Core (US and Canada) market, which it also expects to launch as early as 2019. (Earlier post.)

The chargE concept vehicle represents the second electric powertrain vehicle coming out of the alliance built with a common group electric drivetrain from Volkswagen Truck & Bus.

Leon's e-bus of Canada has been building very similar all weather school e-buses with carbon fiber cab for the last 2+ years. They will become the norm in our area.