Three big-rig trucks hauling freight are running along the stretch of highway that uses Siemens technology to electrify select highway lanes via an overhead catenary system. This catenary system supplies the trucks with electric power; the system also allows for truck operation outside of the electrified sections of infrastructure. 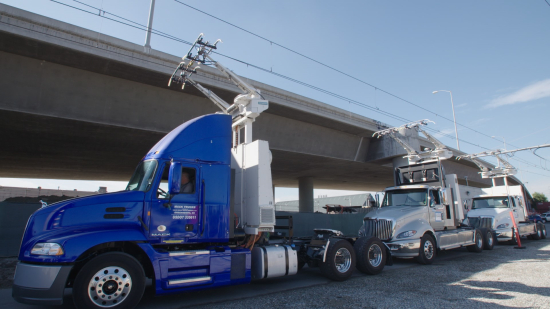 Heavy-duty trucks are the leading source of smog-forming emissions in Southern California. Developing a zero- or near-zero goods movement system in the ports will reduce smog-forming, toxic and greenhouse gas emissions in communities around the ports, which are some of the most heavily impacted by air pollution.

This project will help us evaluate the feasibility of a zero-emission cargo movement system using overhead catenary wires. This demonstration could lead to the deployment of eHighway systems that will reduce pollution and benefit public health for residents living near the ports.

Every day, Americans rely on the goods and services that are carried by freight. But with that mode of transportation predicted to double by 2050, only one-third of this additional travel can be handled by trains despite expansion of rail infrastructure. Experts expect global CO2 emissions from road freight traffic to more than double by 2050. This electrified truck system, what we call eHighway, can modernize the existing infrastructure using the latest technology to accommodate the growing amount of freight travel, reduce harmful emissions, and keep these ports, one of our country’s major economic drivers, competitive.

One battery-electric truck, a clean natural-gas hybrid-electric truck and a diesel-hybrid truck are now driving on a one-mile catenary system on the north- and south-bound lanes of South Alameda Street from East Lomita Boulevard to the Dominguez Channel in Carson. 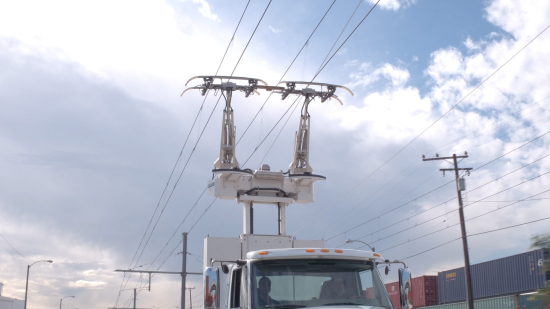 The system is expected to lower fossil fuel consumption, reduce truck operating costs, substantially reduce smog-forming, toxic and CO2 emissions, and help accommodate the growing reliance on freight transportation. The aim of this specific project is to demonstrate the eHighway system applied in truck operation on public roads in an urban US setting and to further prepare applications for larger scale initiatives in the future.

The pantograph can connect and disconnect automatically with the contact line via a sensor system while the trucks are moving. This allows the eHighway trucks to easily switch lanes or pass other vehicles without being permanently fixed to the overhead systems like a streetcar. To further ensure the same flexibility as conventional trucks, the eHighway vehicles use an electric-hybrid drive system, which can be powered either by diesel, compressed natural gas (CNG), battery or other on-board energy source, when driving outside of the catenary lines.

Under a separate contract with SCAQMD, the air pollution control agency for Orange County and major portions of Los Angeles, San Bernardino and Riverside counties, the natural-gas hybrid and battery-electric trucks have been developed by Escondido-based TransPower and the diesel hybrid was developed by Mack Trucks, a part of the Volvo Group.

In June 2016, Siemens launched the world’s first eHighway system on public roads in Sweden. (Earlier post.) The eHighway is running on a two-kilometer section of the E16 highway north of Stockholm through 2018. Two bio-diesel-hybrid vehicles from truck-maker Scania, subsidiary of Volkswagen, are being used for the project. In addition, three field trials of the eHighway technology on German highways are planned to start operation in 2019.

The spaces above and behind the cab could be used for FCs and H2 tanks to generate enough energy for those trucks, for mid to extended range. More H2 tanks could be installed to extend range where required.

They are spending a lot of money for a 1 mile demo. While I have no doubt that it will work, I think that a better short term solution would be to convert all local delivery to battery electric. Longer term, if you want to string catenary, electrify the railroads and use the railroads for long distance carriage. It is cheaper to string catenary for railroads as only one conductor is required with the rails being used for ground.

Oh ..., what a waste. Diesel electric series hybrid will do the job even at current state of affairs.

I guess, a lot of money were, say, redistributed.

No need to run dirty diesel engines when an electric motor will give you all the great low end torque you need and the CNG will keep you running and keep the battery charged. Diesel is like coal; there is no such thing as clean diesel.

Even though its less efficient, I would much rather have Fuel Cell trucks with stations along major corridors, have those filling stations either directly or indirectly powered by renewables.

Building up infrastructure such as this is a waste in my eyes, it cannot be done everywhere, it cannot be cost effective. 1 test mile cost 13million. We could easily put in one H2 station and about 10million dollars worth of solar/wind for that price. (to offset the inefficiency), We'd only need a few thousand stations, versus tens of thousands of miles of electrified highways.

And yeah, as mentioned before, aero.