Ford is working with California-based Ekso Bionics to test the use of exoskeleton technology for Ford assembly workers. Some Ford assembly line workers lift their arms during overhead work tasks some 4,600 times per day, or about 1 million times per year. At this rate, the possibility of fatigue or injury on the body increases significantly. The new upper body exoskeletal tool is designed to help to lessen the chance of injury under these conditions.

Called EksoVest, the wearable, non-powered technology elevates and supports a worker’s arms while performing overhead tasks. It can be fitted to support workers ranging from 5 feet tall to 6 feet 4 inches tall, and provides adjustable lift assistance of five pounds to 15 pounds per arm when its springs are activated. It’s comfortable to wear because it’s lightweight, it isn’t bulky, and it allows workers to move their arms freely.

As a result, the worker will get a noticeable level of support for overhead tasks that require either no tools at all or tasks requiring tools that weigh up to approximately 8 pounds.

Primary tools used with the vest vary by application, including applications that use no tools at all—just manipulating parts with hands overhead. The vest is optimized to support the weight of the worker’s arms so that any overhead work puts less of a strain on the worker’s shoulders and arms. 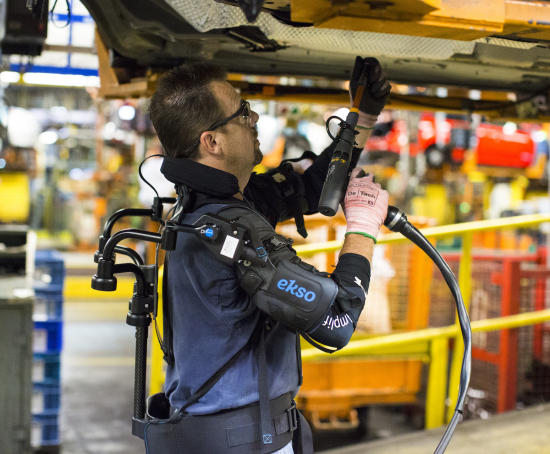 Designed and built for dynamic, real-world environments such as factories, construction sites and distribution centers, the non-powered vest offers protection and support against fatigue and injury by reducing the stress and strain of high-frequency, long-duration activities that can take a toll on the body over time.

With support from the United Automobile Workers and Ford, EksoVest is being piloted in two US plants, with plans to test in other regions, including Europe and South America.

EksoVest is the latest example of advanced technology Ford is using to reduce the physical toll on employees during the vehicle assembly process. Between 2005 and 2016, the most recent full year of data, the company saw an 83% decrease in the number of incidents that resulted in days away, work restrictions or job transfers—to an all-time low of 1.55 incidents per 100 full-time North American employees.

To date, Ford ergonomists have worked on more than 100 new vehicle launches globally using ergonomic technology tools, including most recently the 2018 Ford Mustang, 2018 Ford F-150, and the all-new 2018 Ford Expedition and 2018 Lincoln Navigator. Through significant investments in the program, not only has Ford achieved a reduction in employee incident rates, it has seen a 90% decrease in such ergonomic issues as overextended movements, difficult hand clearance and tasks involving hard-to-install parts.