Nikola Motor Company has named Bosch and PowerCell AB as key suppliers for the Nikola class 8 hydrogen-fuel-cell electric truck, unveiled as a prototype in December 2016. In September, Nikola had said that it was working with Bosch on the development of the vehicle’s powertrain. (Earlier post.)

PowerCell Sweden AB will be the primary supplier of fuel cell stacks for Nikola’s pre-production testing vehicles. The PowerCell S3 (100 kW) is a fuel cell stack with best-in-class power density and is primarily designed for automotive application. The full Nikola fuel cell system is anticipated to output more than 300 kW continuously. The truck’s powertrain will deliver more than 1,000 hp (746 kW) and 2,000 lb-ft (2,712 N·m) of torque.

The PowerCell S3 was developed in an EU-funded project, Auto-stack Core, in collaboration with sub-suppliers, institutes and the end users VW and BMW.

The fuel cell system will recharge the 320 kWh battery pack, which in turn will power the drive motors. The hydrogen-fuel-cell-powered day-cab is slated to have a range of 800 to 1,200 miles, with a 15-minute refill time.

It has been designed to handle the entire lease period of one million miles per truck. Nikola says that its fuel cell—one of the most important pieces to the Nikola drivetrain—is one of the most power-dense and advanced units yet built.

Our relationship with Bosch also gives us access to their experienced engineering team which is one of the largest and most respected in the world. This relationship will be helpful in bringing our products to market as quickly and safely as possible. Design of reliable systems for commercial vehicles takes decades of experience and Bosch brings that to our relationship.

If all goes well during road testing, the PowerCell system will be integrated into the production lineup. Nikola plans to announce a secondary stack supplier in 2018 that will act as a backup and overflow for any testing issues or production bottlenecks. 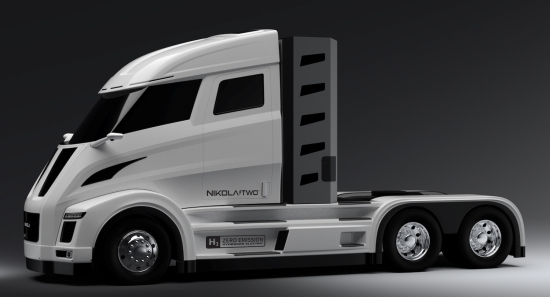 The fully operational, pre-production Nikola Two day-cab will begin testing in Fall of 2018. Following its release, the Nikola Two will undergo a 12-month testing period in extreme climates. This testing period will give the company valuable data in preparation for full production in 2021.

Will this be the first Class 8 FC heavy long range truck?

The same technology could be used for long range buses and high speed passenger trains?

Interesting to see if Nikola Motors also partners with Hyon AS (at Hyon.No) or Nel Hydrogen for Electrolysers and H2 Stations that would complete all the components necessary for the Nikola One truck system. Nikola Energy already has experience as a Solar Panel installer, so maybe they can pull this off.
Two interesting articles: Bjørn Simonsen, VP Market Development & Public Relations Nel Hydrogen comments (https://www.pv-magazine.com/2017/08/30/future-pv-the-feasibility-of-solar-powered-hydrogen-production/) talks about need for PV generated H2 costs needs to be below below $0.05/kWh and Apple just signed a deal this week to power to its Sparks, Nevada data center at 3.099¢/kWh (https://9to5mac.com/2017/11/09/apple-solar-data-center-pricing/).

Gentlemen, please, take a look at that https://energy.gov/sites/prod/files/2014/02/f8/fctt_roadmap_june2013.pdf especially at durability of fuel cells. They cannot reach 5000h (equivalent of 150000 miles) target. Never mind 30K-50K hours target for trucks (equivalent of 1M miles). The energy source is the problem too but again the cyclobility of fuel cells is, say, bad. If one turns them on and keeps them on - they can last way longer but otherwise ... People are working to improve it but the progress is very slow. Besides this, low temperature fuel cells suffer from efficiency issues as well.
What I am trying to say is that all these is highly subsidized by ... you - the tax payer.

With REs price dropping to around $0.03/kWh, improved up to date electrolyzers with produce clean H2 at around $3.00/Kg. FC/H2 trucks, buses and trains will become cheaper to run than current diesel units.

If I were placing bets, I would prefer to bet on lithium sulfur batteries before I would bet on fuel cells. Maybe I am wrong but hydrogen just has too many problems.

Power plant lifetime is probably not a big issue with Automotive Fuel Cells. Based on actual results from Fuel Cell Bus studies >20,000 hours has already been achieved (please review this 2017 study - http://www.apta.com/mc/bus/previous/bus2017/presentations/Presentations/Peeples_HE%20Christian%20and%20Fecteau_Roland.pdf). Ballard claims that their FCveloCity®-HD Fuel Cell will last "with >20,000 hours of operation of a fuel cell power module
in the field without failure."
The real issues with Fuel Cells are initial purchase price and the H2 infrastructure.
Due to these reasons Fuel Cells are NOT good solutions for automobiles or buses.
However, long range Class 8 trucks have entirely different requirements (e.g. daily mileage >700 miles and ability to recharge quickly).
If Trevor Milton and Nikola Motors can solve these issues, then we could start to see the end of the ICE age.

You are quoting 2013 figures for durability in a fast moving field.

For buses we now have firm data from several sources of over 25,000 hours of operation, equivalent to many hundreds of thousands of miles in a trucking context.

Here is the data from London, there are similar figures from the US:
http://www.greencarcongress.com/2017/08/20170830-ballard.html

Carcrazy
Five thousand hours of fuel cell operating life will do for 1 million miles. The cell works for short periods of time during each trip, charging the battery at 300 kW rate, that is 5000x300=1500000 kWh of charge. If the truck consumption is around 1500 Wh/mile or 1.5 kWh per mile, 1500000/1.5= 1 million miles. The very high cost of the infrastructure per vehicle in operation is going to be more of a problem.

' The real issues with Fuel Cells are initial purchase price and the H2 infrastructure.
Due to these reasons Fuel Cells are NOT good solutions for automobiles or buses.'

There are extensive trials of fuel cell buses in China and Europe as well as the US, with hundreds of buses running or on order.

Putting in a hydrogen pump at a bus depot is not really a big deal, and the hydrogen is more economic than at present for cars with their present low volume.

Unfortunately my SARTA link now does not work, but here is Ballard with their costings and write up:

Ballard have many hundreds of fuel cell systems for buses in operation and on order, with large numbers in China.

Advantages are a much wider performance envelope than BEV buses especially in cold weather, with quick refuel and they actually filter and clean city air, as opposed to BEVs which do not contribute much to pollution save through tire and break wear but do not clean the air.

I am not going to rehash arguments for and against fuel cells in cars here, but simply note that the vast majority of cars have nowhere at all that they could be plugged in at home, nor is it reasonable or practical to provide them.

I have been very doubtful about Nikola One, as long distance trucking pushes the performance envelope for hydrogen, which including the CF tanks and so on weighs a lot more and takes up a lot more space than diesel, although far less so than batteries.

However, I am likely some of what I am hearing.

Powercell and certainly Bosch add a lot of credibility to the engineering whatever the finances may be, and they have not got a ridiculous ramp up schedule ignoring proper testing.

@Davemart,
Long distance trucking (or any long distance transportation e.g the Alstom Coradia iLint Train) is where Fuel Cells may work if you can solve the H2 infrastructure issue.
The H2 tanks on the Nikola One will not weigh any more than the CNG tanks currently used by Class 8 trucks today and Trevor Milton knows a lot about that tech (his previous business). Buses and trucks can store 40-80 kg of H2 where the benefit of H2 energy density pays off.

Clean REs production (mainly Solar and Wind) can be multiplied in many countries.

Intermittent REs will supply part of the main loads but will create surplus/excess energy during many hours every day, available to produce clean H2.

Distributed RE plants, collocated with H2 production facilities, could solve competitive H2 availability for FCEVs of all sizes.