Zhejiang Geely Holding Group has entered into an agreement to acquire Terrafugia, a US-based company developing practical flying cars.Terrafugia was founded in 2006 by five MIT graduates; since then, the company has delivered a number of working prototypes. Terrafugia aims to deliver its first flying car to the market in 2019, with the world’s first VTOL (vertical take-off and landing) flying car being made available by 2023.

Under the terms of the agreement, Terrafugia will remain domiciled and headquartered in the US, and continue to focus on its existing mission of developing flying cars. Terrafugia will also benefit from the Geely Group’s significant expertise and track record of innovation within the global auto industry. This deal has received approval from all relevant regulators including the Committee on Foreign Investment in the United States (CIFIUS).

The new Terrafugia seven-person Board of Directors will include Nathan Yu Ning, Geely Holding Vice President of International Business and Executive Advisor to the Board will become the Chairman of Terrafugia with three other appointees from the Geely Holding Company. Chris Jaran, the former Managing Director for Bell Helicopter China, has been announced as a board member and Chief Executive Officer effective immediately.

Terrafugia founder Carl Dietrich will serve on the board of Directors and transition to the newly created role of Chief Technology Officer (CTO) and continue to work on the market actualization of flying car technology.

In anticipation of this transaction, Terrafugia’s team of engineers in the US has already been tripled over the past quarter with Geelys Holding’s support. Geely Holding are fully committed to further investment in the business, including the creation of more high tech jobs in the USA, following the completion of the acquisition.

The team at Terrafugia have been at the forefront of believing in and realizing the vision for a flying car and creating the ultimate mobility solution. This is a tremendously exciting sector and we believe that Terrafugia is ideally positioned to change mobility as we currently understand it and herald the development of a new industry in doing so. Our investment in the company reflects our shared belief in their vision and we are committed to extending our full support to Terrafugia, leveraging the synergies provided by our international operations and track record of innovation, to make the flying car a reality.

After working in the helicopter industry for over 30 years, and the aviation industry in China for 17 years, Terrafugia presents a unique opportunity to be at the forefront of a fledgling but enormously exciting industry. The support that Geely has pledged to make Terrafugia’s vision of a flying car a commercial reality is unprecedented, and I assume this role with full of confidence for the future, with our first priority being the expansion of the company’s R&D capabilities.

The Transition. Terrafugia’s ‘The Transition’ is a practical flying car. A folding-wing, two-seat, roadable aircraft, the Transition is designed to fly like a typical Light Sport Aircraft in the air and drive like a typical car on the ground. It will run on premium unleaded automotive gasoline, fit in a standard construction single-car garage, and convert between flight and drive modes in less than one minute.

In the air, the Transition will have a cruise range of 400 miles with top speeds up to 100 miles per hour, with a maximum altitude of 10,000 feet. The Rotax 912 iS 4-cylinder engine has a fuel burn at cruise of 5 gallons per hour. The Rotax 912 iS Sport engine offers a TBO (time between overhauls) of 2,000 hours. On the ground, the Transition will drive at highway speeds.

The Transition will be equipped with a full suite of automotive safety features, including airbags, pre-tensioning load-limiting seatbelts, a crumple zone, safety cage, and more, in addition to a full vehicle parachute.

The incorporation of advanced autonomous flight technologies such as automatic terrain avoidance will make the Transition one of the safest light sport aircraft airplanes in the sky.

Terrafugia has already developed and flown two full-scale prototypes (one in 2009, the second in 2012), and has received all of the special legal approvals necessary to bring the Transition to market in the US.

TF-X. Terrafugia’s vision for the future is the TF-X. Two propellers powered by all-electric motor pods on either side of the vehicle will be used for VTOL operations. Because the pods will be all-electric, noise impact will be minimal, and the gas engine used for cruise will recharge the batteries during flight. Targeted range is 500 miles, with a cruise speed of 200 mph. Takeoff radius is expected to be 50 feet. 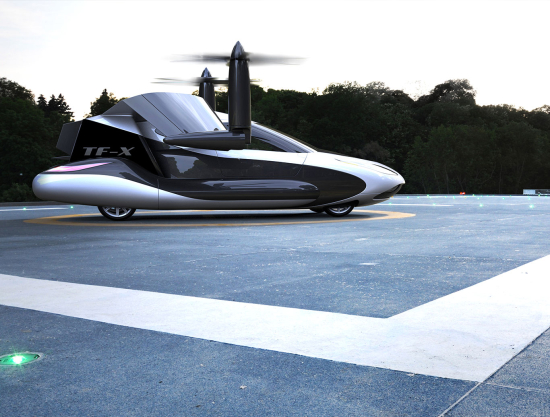 In fact you truly CAN fool some of the people all of the time.