The 12-cylinder X92DF engines (12X92DF) will power a series of nine “mega” containerships, each with a record capacity of 22,000 TEU. The vessels ordered by CMA CGM will be built at the yards of Hudong-Zhonghua Shipbuilding (Group) Co., Ltd. and Shanghai Waigaoqiao Shipbuilding Co., Ltd. They are due to enter service in 2020 on routes between Asia and Europe and are designed to have the potential to sail complete Asia-to-Europe voyages on liquefied natural gas (LNG). The 12X92DF engines will be rated 63,840 kW at 80 rpm, making them the most powerful gas and dual-fuel engines ever built. 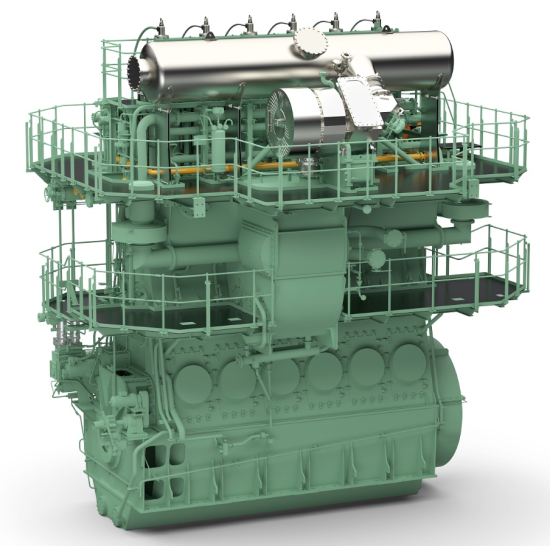 Beyond leveraging the operating economy and reliability of WinGD’s X-DF engines, with this move CMA CGM is endorsing the performance of WinGD’s dual-fuel engines with low-pressure gas admission as a way of addressing existing and upcoming regulations from the International Maritime Organization.

Given the low NOx emissions of dual-fuel engines using lean burn combustion and the extremely low sulfur content of natural gas, by choosing our X-DF engines and LNG, CMA CGM is automatically complying with all existing and future emissions regulations.

The built-in efficiency of our lean-burn dual-fuel engines is also complemented by the favorable ratio of carbon-to-hydrogen in methane—which means that our X-DF engines are already low emitters of CO2 compared to liquid-fueled engines. Our X-DF engines are thus an excellent starting point for playing a full part in achieving the 30% improvement in overall vessel efficiency up to 2025 specified by the IMO’s Energy Efficiency Design Index (EEDI).

The regulations already met by the WinGD X-DF dual-fuel engines include the limits on NOx in Emission Control Areas (ECAs) imposed by IMO Tier III and the 0.5% limit on sulfur in fuel which will be introduced in 2020, as well as possible limits on particulates.

Looking at the overall Total Cost of Ownership (TCO) of the new vessels, as well as operating expenditure (OPEX), capital expenditure (CAPEX) is also reduced because the emissions levels of WinGD X-DF engines are achieved without the need to install exhaust gas after treatment systems, and by the application of the low-pressure gas admission feature of the X-DF engines, which uses less expensive, more energy-efficient gaseous fuel compression equipment compared with low-speed dual-fuel engines requiring high pressure gas injection.

In addition, WinGD’s Generation X engines feature a series of designed-in measures which target increased ease-of-maintenance. It is these aspects that have helped WinGD substantially increase its market share since the introduction of its new diesel and dual-fuel engines. WinGD has so far received more than 75 orders for X-DF engines since their introduction to the market at the end of 2013.

Besides being popular for application in LNG carriers for main propulsion, the number of orders received for cargo ships operating on LNG has increased substantially in 2017, with over 25 engine orders received in the year to date.

With liquid fuel consumption for pilot ignition below 1% of total heat release and the very low sulfur content of LNG, WinGD also sees X-DF technology as the ideal solution to the 0.5% global cap on sulfur in marine fuels proposed for 1 January 2020.

GTT (Gaztransport & Technigaz), an engineering company expert in containment systems with cryogenic membranes used to transport and store liquefied gas, in particular LNG (Liquefied Natural Gas), has been chosen by the shipyard Hudong-Zhonghua Shipbuilding and by shipowner CMA CGM for the design of cryogenic tanks for the nine LNG-fueled container ships.

I am weary of any diesel getting by the requirements without EGR or SCR, mainly SCR... EGR on this thing would be disastrous to economy, and just be gobs of waste heat, dumped back into the engine. Having said that, I am more familiar with on the road emissions, and those on seafaring vessels are probably much more lax and hard to test as accurately. I mean, you have the whole displacement of the engine coming out 40x a minute or more. With a 92cm bore, its pretty big.

I still wonder about having an onboard gas turbine, efficiency could get better, even a 10%-20% improvement would save the company millions in operation yearly. I guess initial cost.

Apparently its also a popular request, 25 this year, and 75 since its debut.

I am glad that global shipping is working so fast to reduce its cost/emissions. Honestly, I think cost is the biggest driver here.

GT's are nice, but have some drawbacks:

- Not dual-fuel; no HFO capability
- Failure-prone gearbox (direct propeller drive simple and efficient)
- Expensive and difficult service (large-bore engines can close-out individual cylinders and can largely be serviced by inexpensive labor)
- While the GT is compact, the waste heat recovery unit (WHRU/HRSG) is quite large
- Steam turbine = more components to fail

Large-bore diesels get ~50% efficiency, which would be hard to better significantly in a small CCGT configuration with tropical sea water.