According to the Baden-Württemberg state environmental agency, brakes and tires are responsible for 32% of driving-related particulate emissions—roughly half of which is brake dust. Significantly reducing brake dust is therefore essential to improving the air, especially in cities.

Now, the Bosch subsidiary Buderus Guss has developed the iDisc, a brake disc that generates up to 90% less brake dust than a conventional brake disc. The iDisc is scheduled to go into production for a European manufacturer in November 2017. 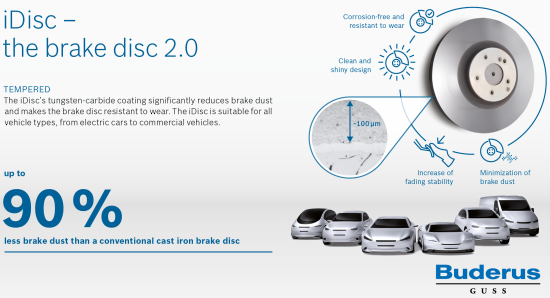 The unique selling point of the iDisc (the “i” stands for innovation) is a tungsten-carbide coating that is currently only available from Buderus Guss. The technology is based on a conventional cast iron brake disc. Every year, the Bosch subsidiary produces up to 20 million of these discs at its German locations in Breidenbach and Ludwigshütte.

To transform a conventional disc into an iDisc, the friction rings are mechanically, thermally, and galvanically treated before being coated. All this is part of a process developed by Buderus Guss and Bosch researchers over a period of many years.

In addition to the significant reduction in brake dust, the carbide coating also ensures greater operating safety. The braking performance is similar to that of a ceramic brake, especially when it comes to fading, as the reduction in stopping power following repeated braking maneuvers is known.

Like a ceramic brake disc, the iDisc is highly stable in this respect and loses little deceleration performance. Wear is also significantly reduced. Depending on the strength of the carbide coating, the iDisc’s service life is twice that of a normal brake disc.

The iDisc also eliminates gouging marks on the friction ring, as well as corrosion—a major advantage, especially in electric cars. Because they recover braking energy via recuperation, electric cars put less strain on the brakes and have to contend with rust formation on friction rings. The temporary slight decline in responsiveness during braking associated with this does not occur with the iDisc.

Buderus Guss notes that there is an aesthetic argument for the iDisc as well. With a shiny carbide coating, wear-resistant and corrosion-free, it is a match for the trend toward open rims. The 90% reduction in brake dust with the iDisc also eliminates the need to regularly clean rims with aggressive cleaning products.

The iDisc has everything it takes to replace the conventional cast iron brake disc and become the new standard in the brake disc market. Given the continued particulate pollution debate in many countries and large cities around the world, there is nothing standing in the way of its breakthrough.

For cars alone, demand for brake discs stood at more than 330 million units worldwide in 2016.

Now you have to find a way to get people to pay the 3x to use them - or better still get Bosch to get their friends in the EU to mandate it.

Next we need an electromagnetic brake - or maybe that is an in-wheel motor!

This is a real win-win solution with longer wear and less air pollution. Coupled with in or near wheel e-motors it could do even better.

Can we keep these brake pads after the car is worn out and install them in the new car we buy to save money and prevent pollution.

Whilst this is to be applauded from dust and replacement perspectives, how big an issue is brake dust and wear as we shift to cars where electromagnetic (contactless, regenerative) braking dominates?

The rust free coating is a big advantage for EVs which can have severe problems with rusted brake discs. Infrequent use of friction brakes due to superior regenerative braking often leads to rust on legacy brake discs.