Plug-in electric vehicles sales surged to a record in the third quarter, largely driven by strong demand in China, according to a new report from Bloomberg New Energy Finance (BNEF). Sales of battery-electric vehicles and plug-in hybrids exceeded 287,000 units in the quarter, 63% higher than the same quarter a year ago and up 23% from Q2 2017, BNEF said.

China accounted for more than half of global sales as its market for electric cars doubled amid government efforts to curb pollution. 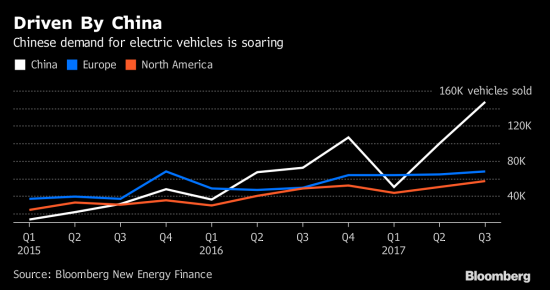 Europe was the second-biggest market in the third quarter for EVs, with 24% of sales, followed by North America. The rising volumes in China are supported by government incentives.

BNEF expects global EV sales to surpass 1 million units this year for the first time. In 2017, many established carmakers from Jaguar Land Rover to Volvo Cars announced plans to bring electric versions of their vehicles to market in the next few years.

Several governments have also announced targets for cleaner transport, some driven by the emissions-cheating scandal that engulfed Volkswagen AG. France and the UK said they will ban sales of new gasoline and diesel-burning cars by 2040, while the Netherlands is targeting that all new cars sold by 2030 will be emissions-free. China—the world’s largest auto market—is considering such a ban, as is California.

It is only because of tax grants, subsidies and grants and harsh regulations. They will also lose big money because almost nobody want an ev. I said clerly to stop believing harvyd and engineer poet and all the blogger here and buy a small gasoline car.

Hey folks. Usa builded the biggest economy with petrolem mainly and also bandwith ( film, music, internet, banking payments, publicity, tv, etc), this is a efficient system. Don't listen the leaftists all around the world that need to broke the economy with a poor energy system like batteries, they are poor mobile energy system. This is the physical laws that the average consumer know by instinct.

Is China going to demonstrate (or has already done it) that it has superior governance, better hard working work force and superior overall performance than our worn out corrupted democracies?

Is DT capable of making/provoking enough changes to make a difference?