Cie. Maritime Belge SA (CMB) is launching the Hydroville—the first passenger shuttle that has received a Class approval to burn diesel and hydrogen in its combustion engines. The vessel completed her sea trials on 16 November. 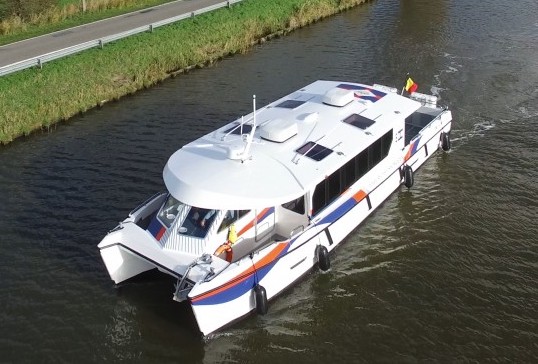 The shuttle will be mainly used as a platform to test hydrogen technology for commercial sea-going vessels. In a first phase, the Hydroville will transport people from Kruibeke to Antwerp during the rush hour.

The 14-meter Hydroville can carry 16 passengers plus 2 crew, and is powered by two hydrogen-fueled internal combustion engines with a total shaft power of 441 kW. The ship has 12 hydrogen tanks (205 liters @ 200 bar) and two diesel fuel tanks (2x265 liters) for pilot/backup fuel.