The adoption of electric vehicles (EVs) has accelerated as policymakers across the globe pass regulations to reduce emissions of air pollutants, according to the latest analysis by JATO Dynamics. 2017 represents a turning point in the adoption of electric cars, with sales in key regions increasing significantly. The industry is at an important moment in the development of the segment, with the majority of car brands placing various forms of electric vehicles at the heart of their future plans; announcements being made this week at the LA Auto Show reinforce that point. 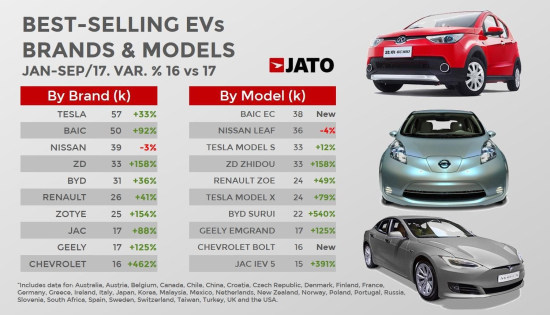 China’s ever-expanding car market is crucial to the future of the electric vehicle. If EVs become a realistic mainstream choice, a likely contributing factor will be the emphasis the Chinese market has placed on electric vehicle technology, JATO noted. Policymakers in the country are attempting to balance its rocketing demand for cars with the nation’s severe pollution problem. The Government has introduced policies to push EVs, such as car purchase restrictions in large cities and subsidies for domestically produced EVs and PHEVs. Global manufacturers are now entering the Chinese market, as fully electric vehicles will earn more credits than plug-in hybrids under the country’s new Carbon Credit Program, which will come into effect in 2019. As a result of this focus, Chinese manufacturers have prioritized the development and innovation of domestically produced electric vehicles.

As a result, China is now the biggest market in terms of volume, with 227,000 EVs sold January through September 2017. China has quickly taken the top spot as the world’s biggest EV market, rapidly outselling other more advanced markets such as the US and Europe. In comparison, it took decades for the country to outsell them on traditional internal combustion engines.

In turn, China’s focus on producing electric vehicles to solve its domestic emissions problem means it has led the way in the development of the technology. The Chinese automotive industry’s resulting leadership in the sector suggests that the nation now has an opportunity to conquer global markets and rival its western counterparts. This is highly significant, as internal combustion engines produced by China-based manufacturers have traditionally struggled to compete against western brands that have more experience and heritage in the sector.

As a result, six of the top ten electric vehicle brands in key automotive markets through September 2017 are based in China. If the Chinese industry is able to produce EVs that are attractive to global consumers and are appropriately priced, the country’s car industry could certainly increase its share of the global market.

In contrast to China, demand for EVs in the US has slowed down since a peak in 2016, JATO said. Results in the US have impacted the wider North American region, which is significantly behind Europe in terms of EV adoption. 67,000 electric vehicles were sold in the North American region, a modest increase of 21% on the same period last year. This can be attributed to a reluctance amongst consumers in the significant US market to move away from gasoline vehicles.

By comparison, there were 100,000 EV sales in Europe for the period January to September 2017, an increase of 42% when compared to the same period in 2016. Key markets such as the UK, Germany and France all showed positive growth in the category. The EU recently introduced WLTP, a test procedure that is more representative of real world driving than previous NEDC testing and is one element of a broader drive to tighten emission reduction rules. European nations such as the UK and France are proposing diesel bans as soon as 2040 and, on a local level, cities are taking action to reduce emissions; the UK city of Oxford recently proposed the world’s first no-emission zone.

Within this context, it is unsurprising that eight of the top ten countries in terms of EV market penetration from January to September 2017 are European, JATO said. The success of electric vehicles in Europe is driven by the combination of EU and national regulation, combined with local initiatives. Norway leads the world, with an EV market share of 16.6%, significantly ahead of the Netherlands in second position, where EVs have a market share of 1.4%. Of the biggest markets, France, Germany and the UK have an EV market share of 1.2%, 0.6% and 0.5% respectively.

Despite increasing consumer adoption of electric vehicles in the region, the European car industry has been built on the internal combustion engine, and this legacy has hindered electric vehicle innovation, JATO suggested. As a result, European manufacturers are yet to establish wide enough EV ranges and consumer choice is limited. Renault, for example, has only two fully electric models, and only one of these, the Zoe, is a passenger car. Volkswagen still does not have a dedicated electric vehicle, but instead offers electric versions of its existing models. Volkswagen’s situation will change with the beginning of production of the I.D. family. (Earlier post.)

The USA is currently standing out on a global level as its EV adoption rate is significantly behind other major markets in Europe and China. Nonetheless, regulations to penalize emissions are beginning to impact countries, and consumers are increasingly abandoning diesel vehicles following reputational issues and proposed bans. As a result, car manufacturers are prioritizing the development of electric vehicles. The decline in diesel sales is a significant opportunity for electric cars to fill this gap. However, there are two key issues. Firstly, ranges in the segment are still limited, particularly in Europe, so consumer choice is not at the level needed for mass adoption. Secondly, consumer fears around driving range and performance still persist. The automotive industry is at a precipice—automotive manufacturers must invest in their electric offerings, whilst investment in infrastructure on a governmental level is needed, to provide the charging points and electrical capacity to cope with the mass adoption of EVs.

I think Chevy is on pace to outsell tesla in the US. I'm surprised that more people wanting a model three haven't jumped ship.
If i were in the market for a BEV I'd chose a Bolt, and i really don't like GM.

Ford is launching/announcing ~ ten additional electrified(don't know if the interceptor and the cop cruisers count as one or two cars, or if they are considered the same as the existing fusion) vehicles including one fully electric between now and this time next year. Plugin hybrid full size suv and trucks are in the works.

There will finally be some disruption in the next five years. If musk could ramp up and sell those 500k model 3s yearly, that would contend with existing ICEs, in a very significant way. I just wish there was more fanfare for the bolt. Chevy is likely able to match demand, even if it were much higher.

BAIC sold over 11k EC models in October 17,up from 9k in September.They cost 150k yuan but are subsidized by govmint by 70k yuan.For 70k yuan you could buy a similar sized (budget) vehicle.

The Chinese govmint understands that as long as they spend in yuan they can never run out of money.They have the right(nay the responsibility)to spend what is required by their country and people.

Until the western nations recognise this they will keep getting their lunch eaten.

The national debt(federal debt) as a % of GDP(gross domestic product):

US.%100
UK.% 90
Australia.% 30 But the politicians still talk about"leaving an horrendous debt to our kids/grandkids"
Japan.%250
China.%260 is the figure given but who knows? It is entirely irrelevant anyway.

Bolt sales are lower than Tesla, and they always will be. LG Chem has (inadvertently) stated that they are only contracted to build up-to 30,000 Bolt battery packs per year. Bolt sales aren't high enough to reach that target, even if you take their highest sales month and multiply by 12 (ignoring seasonal variations).

Huh? In the US two out of the top three plugins are Chevy. The first being the Tesla model S, then the Bolt then the Volt.

The bolt had outsold the model S 5months this year, possibly, because we don't know much hard data from Tesla. The bolt also has been trending up in sales, it's moving almost 3k units a month now. For a car that's been out for such a short time, it's awfully close to the top spot.

Contracts are also renegotiated constantly, initial contracts are just that. Most of the time negotiations happen throughout preproduction, or if volume hits higher or lower than anticipated. Unless LG is at max capacity and can't bring in more shifts, it would be silly to hold GM back.

I'll try to figure out the days supply for bolts. If someone can look at the NADA and tell me that would be great. It could give you an idea of demand in the future.

TESLA is losing lots of $$ on every e-vehicle produced.

Higher performance, lower cost batteries are required for practical near future extended range BEVs. The 30% reduction claimed by TESLA/Panasonic mega battery factory is not nearly enough. Batteries performance has to be increased by 100% to 200% and their cost reduced by another 50% and more before yearly production/sales of practical EVs break the 3,000,000 or 3% level.

Unless major changes are applied, China may soon increase its lead? The same will happen for EV batteries.?