True Zero reported that fuel cell electric vehicles in California have used 250,000 kilograms (250 metric tons) of clean hydrogen—and driven 17 million miles—supplied by 18 retail stations owned and operated by the company. The True Zero stations plus 13 others make up a total of 31 stations open across California, supported by California Energy Commission grant funding and a long-standing State commitment to zero emission vehicles.

The hydrogen sold at True Zero stations is transported in from facilities producing hydrogen for industrial uses. Two-thirds of this hydrogen is derived from fossil fuels, such as natural gas. One-third comes from renewable sources such as biomass; the company says that it is working to increase the percentage of renewable hydrogen.

The Energy Commission is pleased to support True Zero, a California-based company whose leadership is helping pave the way for our transition to a zero-emission transportation future. Surpassing the milestone of dispensing a quarter of a million kilograms of hydrogen demonstrates how government and industry can successfully work together to provide the fueling infrastructure necessary to allow Californians to travel emissions free.

True Zero, a California-based company, is the largest fully-dedicated developer and operator of hydrogen stations in the world, with 18 hydrogen stations open now and 9 more under development. The company’s growth has been supported by more than $50 million dollars in grants received from the California Energy Commission, as well as grants from the South Coast and Bay Area Air Quality Management Districts, and private financing from Toyota and Honda. 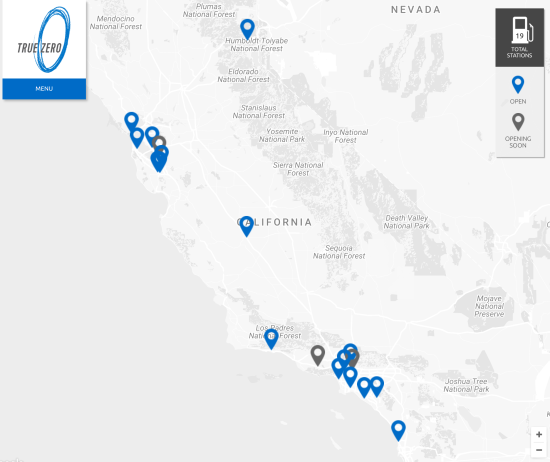 The hydrogen sales numbers by True Zero indicate that most California fuel cell vehicle customers are finding no range or daily mileage limitations. Furthermore, their daily and hourly refueling patterns look nearly identical to those of a gasoline car, which indicates that customers are using their fuel cell vehicles without having to change their driving habits. The 17 million miles driven on fuel cells cars using True Zero hydrogen translate into 10 million pounds of avoided greenhouse gas emissions (in CO2 equivalency).

A switch to REs for main and distributed H2 production stations should be planned.

The hydrogen sold at True Zero stations is transported in from facilities producing hydrogen for industrial uses. Two-thirds of this hydrogen is derived from fossil fuels, such as natural gas.

Greenwashing, exactly as I predicted.  Hydrogen is hydrogen, you can't tell what it came from.

The current NG glut and very low cost will not last forever.

It is possible to mandate that a much higher percentage of H2 production be done with surplus/excess REs.

Positive and negative taxes can be used to level the playing field for electricity and H2 production.

I do not understand this fantasy of surplus/excess REs. We currently get about 7% of our electric power from wind and solar and about 6.5% from hydro but, for the most part, the hydro can be stored and released as needed. Also, the typical efficiency of electrolysis to compressed hydrogen and back to electricity via fuel cell is about 25%.

I do not understand this fantasy of surplus/excess REs.

It's no fantasy, it's a very real problem.  The capacity factor of wind is low, and solar PV is much lower.  Getting a large fraction of total energy from these sources requires that the nameplate capacity start running up against the immediate grid demand.  On top of this you've got must-run generators that the grid requires to provide essential grid services.  They CAN'T go off the grid to make room for "renewables".  The result is surplus generation.

The only way to square this circle is to have someplace to dump the excess RE, preferably somewhere that displaces fossil fuel.  Molten silicon heat batteries replacing combustion heat in gas-turbine power plants are looking good right now.  That would let you power the "must run" generators on something other than fossil fuels at least part of the time.

Unless the cost of NPP produced electricity is reduced to well below $0.10/kWh, lower cost REs will grow and produce a much higher percentage of total e-energy used. Secondly, REs can be installed much quicker and cheaper than CPPs.

REs being intermittent, most grids will have many more hours of surplus/excess REs most every day. Surplus/excess RE will soon be available at below $0.03/kWh to generate clean H2.

An ideal situation is a grid supplied with easily varied Hydro energy and loads of complementary Solar/Wind REs. With such an ideal situation, surplus/excess Solar/Wind energy could be reduced to off peak night and week ends hours.

However, that still leaves a lot of production hours when all 3 clean energy sources could be available for clean low cost H2 production.

In our area, Hydro/Wind sources generate enough yearly profits (close $4.0B) to finance extensive clean H2 station networks at an accelerate rate, in the next 10 years or so.