By redeveloping both the materials used and the structure of the reactor, the facility can now deliver 750 kWth. This is a significant improvement over the previous development stage of this facility, which had a power output of approximately 100 kW. In the coming months, scientists will produce hydrogen in test operations and demonstrations at the Plataforma Solar de Almería (PSA) in southern Spain, and investigate the suitability of materials. 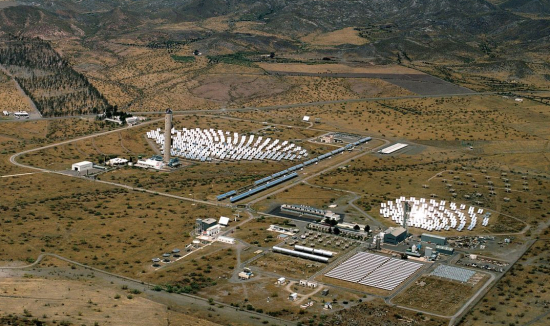 Hydrogen has the potential to increase the proportion of renewable energies used, particularly in the transport and heating sectors. This energy source can, for example, be used directly in vehicles with fuel-cell drives. In addition, it is a component in the production of synthetic fuels such as methane, methanol, gasoline and kerosene. Hydrogen generated using renewable energies can thus significantly reduce carbon dioxide emissions in the transport and heating sectors.

In the transport sector, hydrogen drives can make a significant contribution towards climate protection. The HYDROSOL-Plant research project is thus a significant step on the road to efficient production of hydrogen using solar energy.

Hydrogen is produced directly via a thermo-chemical redox reaction using the thermal energy of the sun. A set of mirrors focuses the sunlight onto a single point that is heated up to very high temperatures. With this heat, water can be split into hydrogen and oxygen.

In the first part of the procedure, the sun heats redox materials, such as nickel ferrite or cerium oxide, in the interior of the reactor to 1400 ˚C. At these temperatures, the metal oxide is chemically reduced—i.e., oxygen is released and transported out of the reactor. The actual water splitting occurs in the second step, which takes place at 800 to 1000 degrees Celsius.

Here, the researchers let water vapor flow through the reactor. The previously reduced material is reoxidized. As the oxygen is now bound into a metal oxide, it remains in the reactor, whilst the hydrogen is free to be transported out of the reactor. Once the material is completely reoxidized, it is regenerated through the first step of the procedure and the cycle starts again.

Building on earlier research projects, the scientists have significantly advanced both the structure of the reaction chamber as well as the materials.

The solar radiation is secondarily focused using a cone with a coating of reflecting material, which increases the efficiency of the process as less heat can escape. Newly-developed ceramic foams hold promise for a higher hydrogen yield and greater durability. The researchers expect that these will produce around three kilograms of hydrogen per week in test mode.

With the HYDROSOL-Plant, we have for the first time designed a plant that reproduces the entire process, from generation, through the separation of high-purity hydrogen, to its storage. Although our work is still in the research phase, we can already generate one kilogram of hydrogen per week, which is a significant amount. An efficient fuel-cell vehicle can travel well over 100 kilometers on one kilogram of hydrogen.

Researchers reckon that it will be at least a few years before the procedure is ready for the market and for commercial applications.

The first applications could act as a stand-alone solution, for instance in areas where there is no connection to the electricity network. In those cases, a production of 10 kilograms per week may already be worthwhile. Depending on how fast development progresses, in 10 years time it will be possible to use this procedure for the industrial generation of hydrogen.

The general idea behind the HYDROSOL project and the demonstration of its feasibility have already received numerous scientific awards, including the European Union’s Descartes Prize in 2007 and the Eco Tech Award at the World Exposition in Tokyo in 2005.

one kg/week? if it were bitcoin that would be something but hydrogen? I probably produce that much biomethane in a week.