The Volkswagen brand Board of Management has agreed on milestones with key suppliers at the “MEB Supplier Summit” in the run-up to start of production for the first vehicle based on the new modular electric drive kit (MEB). Production of the compact all-electric Volkswagen I.D. will begin in 100 weeks at the Zwickau plant in Saxony. At the Los Angeles Auto Show, Volkswagen announced it will introduce a battery-electric SUV based on the I.D. CROZZ concept vehicle in the US in 2020. (Earlier post.)

At a workshop on the MEB held at the Los Angeles Show, Dr. Matthias Erb, Chief Engineering Officer North American Region and Head of Product Strategy for Volkswagen Group of America, explained that the MEB follows the Groups’s existing platform strategy, but with a toolkit exclusively for battery electric vehicles. Among the attributes and components of the toolkit are:

The MEB currently starts with a range of 200 miles (323 km) with expected extension to up to 300 miles (483 km) in the next few years. The flexible modular system will allow the incorporation of new battery solutions with higher energy densities as these become available.

Currently, Volkswagen is using prismatic cells, but that can change, Dr. Erb said. He said that Volkswagen expects the next significant step in range to be in the 2023-2024 time frame. Longer term (around 2027), he noted, Volkswagen is still looking to solid-state batteriess as a higher range solution.

Volkswagen designed the MEB not only to define the optimal equipment for EV requirements (e.g., axles, drive units, wheelbases, and weight ratios) but also to reduce manufacturing costs. A good example of the cost benefit of the MEB is the battery pack. Instead of designing a pack that fits into the current architectural and production requirements of the MQB-based e-Golf, for example, Volkswagen can take a simpler approach with the skateboard of the MEB.

This, as illustrated in the slide below taken from a presentation given by CFO Frank Witter earlier in the year, allows Volkswagen to drive the cost of the pack assembly much closer to that of the cell costs. 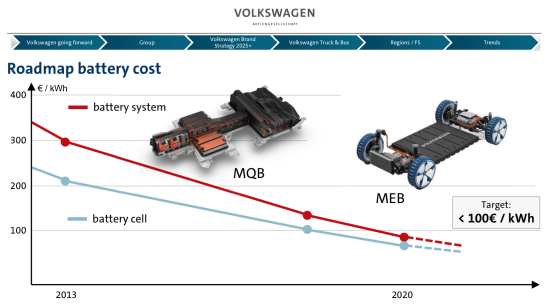 For the introduction of MEB vehicles, Volkswagen is strongly committed to the approach of value sourcing, under which suppliers contribute their ideas for better technical solutions through concept competitions in the early stages of development. To date, more than 100 suppliers have already been nominated within the framework of our electric offensive. What I find important is the fact that a new type of cooperation for our partners and Volkswagen begins today—we are involving top suppliers in development work on the I.D. project considerably more intensively and at a significantly earlier stage.

—Ralf Brandstätter, Board of Management Member responsible for Procurement

Volkswagen is targeting the production of more than 100,000 vehicles built on the MEB platform in 2020, said Christian Senger, Vice President Product Line e-Mobility.

We have significantly reduced the complexity of the I.D. project and shortened the product creation process by 11 months. The new vehicle architecture, autonomous driving and the topics of networking and services will call for a working model involving close networking with all partners and suppliers. The plan for the product has been set out and we will now devote all our energy to implementing it together.

The new vehicle generation is to be launched in Europe, China and the US. For the US, said Dr. Erb, the first wave of the MEB vehicle launch will begin with the I.D. CROZZ, followed by a sedan, another SUV, and then the anticipated production version of the I.D. BUZZ—the electric version of the iconic Bulli. (Earlier post.)

The second wave, he suggested, will feature a number of derivatives, as well as an MPV, crossover and potentially others.