MOIA, the mobility startup from the Volkswagen Group (earlier post), is introducing its electric ride pooling concept van just one year after its inception. MOIA is presenting the electric van and its ride pooling ecosystem with the mission “One Million Cars off the Road” at TechCrunch in Berlin (4-5 December). As MOIA’s first project, the entire ecosystem—including the newly designed electric van—will launch in Hamburg at the end of 2018.

The goal is to launch the service in Hamburg with 200 electric shuttle vehicles in 2018 and extend the fleet in 2019. Once the service has successfully launched in Hamburg, MOIA intends to expand to other cities as well. MOIA is currently testing the service in Hannover using a fleet of Volkswagen Multivan T6 vehicles.

In addition to the car, the system includes a customer app which passengers use to book and pay for a MOIA. The app shows which cars are available and how much the ride will cost before a customer books a trip. A pooling algorithm groups passengers with similar destinations together in order to increase the capacity for each car and to avoid detours. A driver app and comprehensive fleet management complete the system. 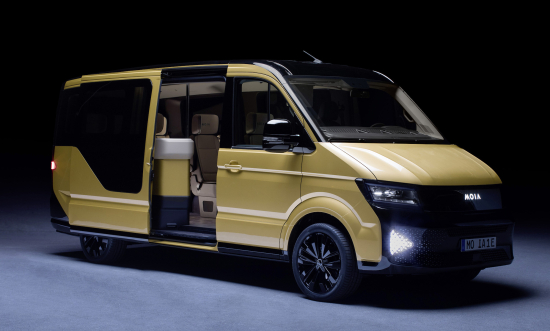 We started one year ago at TechCrunch in London with the vision of partnering with cities to improve the efficiency on their streets. We want to create a solution for the typical transport problems that cities face, such as traffic, air and noise pollution, and lack of space, while simultaneously helping them reach their sustainability goals. In a short time, we’ve laid the groundwork to add a new mobility component to the urban mix. In 2018, we’ll be ready to launch our ride pooling concept internationally and take the first steps toward our goal of reducing the number of cars in major cities by one million in Europe and the USA by 2025.

Various operator models will be possible and can be developed together with cities and partners.

The MOIA car is a fully electric car that provides space for up to six passengers to fit comfortably. The interior was designed to be spacious, with standalone seats, plenty of legroom, and enough space to move around and reach each seat with ease. 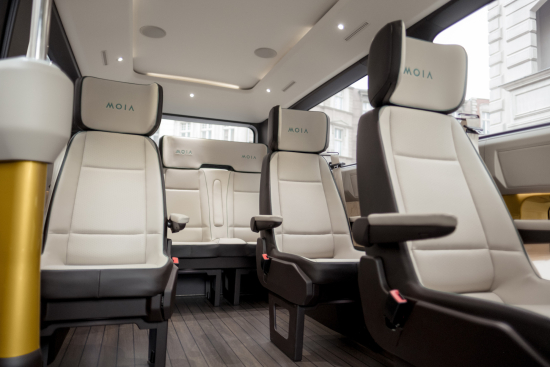 The car was developed and designed exclusively for ride pooling services—every ride should be comfortable. Even those passengers who wish to have no contact with other passengers should feel comfortable onboard. The seats are equipped with convenience features such as dimmable reading lights and USB ports. Each car also offers fast WiFi for passengers. The optimized automatic door and handlebar make getting in and out of the car easy. Luggage can be stored in an area next to the driver.

Volkswagen Commercial Vehicles and Volkswagen Osnabrück planned, developed and built the MOIA car in only ten months. The car has a range of more than 300 kilometers (186 miles) according to WLTP-standard and can be charged up to 80% in about 30 minutes.

Together with MOIA and VW Osnabrück, we are redefining car manufacturing. We are very proud of the fact that we were able to build a new car specifically tailored to the needs of ride pooling in just ten months.

—Eckhard Scholz, member of the Executive Board of Volkswagen Commercial Vehicles

This accomplishment was made possible through the use of agile processes in the Osnabrück plant. The car will make its debut on the streets of Hamburg next year. MOIA has been testing its service in Hannover since October 2017 and continuously developing its components in real time. The “MOIA co-creation process” is an integral part of this test, which consists of a fleet of 20 Volkswagen T6 Multivans.

MOIA is a 100% subsidiary company of the Volkswagen Group. The company, based in Berlin, Hamburg, and Helsinki, develops its own mobility services, working together with cities and public transportation organizations. MOIA is currently developing and implementing various services along the mobility value chain with multiple offerings for different user groups.

Make it with automatic drive (driverless) and this type of e-vehicle with 6 to 10 seats would quickly become a way to reduce traffic jams, air and noise pollution and GHG in city cores.

@Harvey, It doesn't need to be autonomous - if it can take 5 passengers+driver it is way better than 5 people in their separate cars.
I would add seat trays so people can put out laptops (although they might feel nauseous if the motion is unsteady and usb chargers.

By the time this vehicle is fully commercialized, automated drive (drive less) systems will be common place. The driver is an extra load and often makes the ride unsteady and more dangerous.

the problem with having a driver is the cost. way more than any other expense. perhaps if passengers could be certified as drivers then they could take over while they ride and then turn over to another passenger when they disembark. Not really serious but maybe when certain levels of autonomy are reached?

@harvey, maybe, the development time depends on how serious they are about it.
It would be better if it was autonomous (1 extra passenger), but it might be good to have a driver to keep order in case things got out of hand.
Also, if the thing was not too awful, people could use them as personal vehicles and also take passengers for ride sharing, assuming local laws allowed it. (So the driver is also a passenger).
If it was very comfortable, people might go for it.

Build the customer base while working on the technology. If you wait for Automated vehicles, someone else will already own the market.

Prediction: More than half of the passengers of these vehicles will be people who would otherwise use public transport or bikes.

The concept of having to install an app means that you first have to know that you have to install that app and learn to use it. That means: young people and/or people who already use a slew of public transport apps.

Only two things can drag me out of the comfort of my own car (at least presently): Hassle finding a parking space and wanting to have more than one drink before going back home.

Other than that, the mini-bus looks cool! Great for airport shuttle service.

PS: the seats are shaped for young, fit bodies... I think they know already.

Thomas, those bolsters are very very high, not a whole lot of wiggle room for the average person, probably not enough room for even the mildly obese.

Autonomous technology will spread very fast if laws allow it. Even if it cost an additional $100,000 per car, it would catch on fast in the service industry.

The driver being the most expensive part, as others pointed out is not an insignificant thing, plus the fact that it replaces 3 drivers makes it that much better. I would imagine even if it cost 1million dollars additional for the car it would catch on, they would stand to gain almost $500,000 over the life of the car, just in reduced driver costs.

As for the ride sharing van, it's very much a prototype, likely much would change. The seats hopefully will change.


I just don't feel that this would do so well. All the ride sharing companies, and many other are aggressively pursuing autonomous vehicles. We are basically there as far as technology/hardware goes, software will need tweaks for millennia, but it's probably already safer than a human at this point in time. Legislature and a fear of the unknown is holding it back.

As Harvey stated, this will take some time to launch, we could easily have starter fleets of full autonomy in that time. We'll probably see our first purpose built full autonomy car debut in under ten years. Up until then, it's likely just modified versions of existing cars.

This could do well, Musk talked about 12 passenger Model X.

GM claims that their automated drive e-taxi vehicle will be marketed in 2019. If so, there are no good reasons why this trip sharing e-vehicle could not be driver less on day one, by 2020 or so?

Trip/vehicle assignments, pick up points and routes management should also be highly automated and easily adaptable to various needs.