Results of testing on a Euro 6 BMW 320d diesel by the German environmental organization Deutsche Umwelthilfe (DUH), ZDF’s WISO and a software expert point to the use of inadmissible defeat devices, according to DUH. The organizations found that road-testing NOx emissions are up to 7.2 times higher than those produced on the dyno, which met the official NOx limit. The main cause for the higher on-road values ​​is that the exhaust gas recirculation (EGR) is in some cases practically switched off under certain conditions, DUH said.

According to the investigation, not only the speed, but also the torque is used as a parameter for this shutdown. The software expert Lothar Daub explained that EGR is switched off above 3,500 rpm; this configuration was stored in the software of the vehicle, with a a map and corresponding data. Such a speed is reached at 47 km/h in second gear, 70km/h in third gear, 87 km/h in fourth gear and 112 km/h in fifth gear. 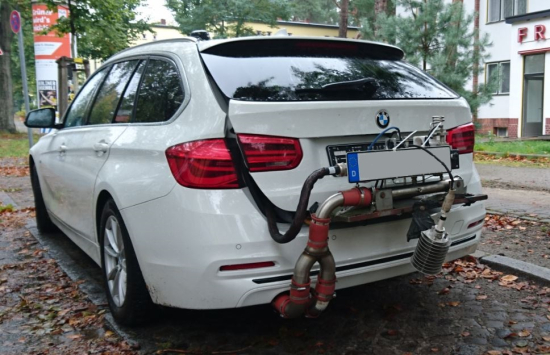 The European Type Approval Regulation 715/2007 explicitly includes in its definition of “defeat devices” the engine speed (RPM) as a parameter for reducing the effectiveness of the emission control system during normal vehicle operation. General activation of defeat devices is inadmissible under this regulation.

DUH noted that on 27 September 2017, Harald Krüger, CEO of the BMW Group, said: “We did not manipulate the vehicles, we have clean diesel, and they are the best in the world, there is no defeat device at the BMW Group.” This full-bodied promise is in clear contradiction to the results of the exhaust and software investigations of the BMW 320d, DUH charged.

The available measurement results are very clear indications that inadmissible defeat devices are present in the engine control software. These must be completely removed. The vehicle must have fully functional exhaust gas cleaning in all normal operating situations. Today we will hand over our investigation results to the responsible authorities and demand a review and, if necessary, revocation of the type approval and an official recall for all vehicles which have an illegal defeat device.

The DUH is applying to the German Ministry of Transport for the publication of all officially known defeat devices for diesel passenger cars from different manufacturers; these previously had been refused based on the protection of trade secrets of the manufacturers.

The vehicle was tested by TÜV Nord on the dyno using the New European Driving Cycle (NEDC). The vehicle achieved a very good result with 27.6 mg NOx/km. Even when driving on the test bench with 10% higher speed (NEDC + 10%), the values ​​were well below the Euro 6 limit.

The same vehicle was then measured on the road. The Real Drive Emissions (RDE) emissions were well above the Euro 6 limits. Particularly in the out-of-town component of the cycle, NOx emissions were significantly increased—and even higher in the NEDC + 10%.

The DUH has sent its measurement reports to the Federal Ministry of Transport and the Federal Motor Transport Authority (Kraftfahrt-Bundesamt) and has requested that this matter be clarified. DUH suggested that BMW can not argue that the settings are to protect the engine, because the vehicle does not show this exhaust behavior on the test bench.

"According to the investigation, not only the speed, but also the torque is used as a parameter for this shutdown. The software expert Lothar Daub explained that EGR is switched off above 3,500 rpm; this configuration was stored in the software of the vehicle, with a a map and corresponding data."

What ignorant BS is this? EGR in passenger cars is often turned off at high loads in order to avoid soot. That there is a trade off between NOx and soot isn't news.

The emission limit for on-road measurements is not 80 mg/km; it is 168 mg/km. Axel Friedrich, a “global” expert on emissions, should know this but one could presume that he chose not to mention this, since it would speak against his arguments. Moreover, the 168 mg/km limit is enforced for NEW vehicles starting this autumn and for ALL vehicles in 2019. The limit does not apply retroactively, i.e. on cars manufactured in 2016, such as this car. If we look at data not so biased as this study, we find that, e.g. the German magazine ams, has ranked BMW as the best one of all manufacturers tested so far. We can also note that the certifying body TÜV Süd backs up BMW. They have tested a similar car of the same model. Neither in the lab nor in on-road measurements could they see any signs of illegal defeat devices. Overall, the tested vehicles showed a very robust emission behavior.

We can also note that all new (I presume?) BMW diesel engines will have more advanced emission control than this car, which only has a NOx storage catalyst. New engines have a combination of NOx storage and SCR catalysts. One example is the BMW 520d that (so far) has the lowest level of all diesel cars tested by ams. Starting late this year, BMW is also introducing a new engine with; presumably, even lower emissions than the mentioned 520d, which had the old engine but SCR catalyst.

I have a 325d with the same engine, only double turbo (a small and a large working in parallel).

Pollution above 3,500 is a non-issue. If you spend more than a few seconds at those rpms, you're driving your diesel engine wrong!

That said, there might still be a defeat device in there somewhere.

@Thomas Pedersen
I can agree with you, although I do not have so many horses in my Ford Focus as you have in your car. It almost never happens that I break 3000 rpm. Normal shift point is just under 2000 rpm. In dense traffic, I would run over the car in front of me if I went over 3500 rpm.

It is normal that EGR is reduced at high rpm. Another factor might be that the capacity of the NOx storage catalyst is limited. If the catalyst is almost “full”, I doubt that regeneration of the catalyst could be done if the driver starts very aggressive driving at highway in that situation. There are some thermal limitations for running an engine slightly below lambda 1 (for NOx regeneration) at very high load. This might explain the great variation between their tests. It is obvious that they tried their best to frame BMW.

Given the fact that TÜV Süd has thoroughly investigated this car, I would doubt that there is any defeat device in the software. Everything that DUH showed can be explained by applying some knowledge and common (engineering) sense. Having said that, one could add that there will always be off-cycle driving conditions when a grey zone is entered and some measures have to be taken to protect the engine and aftertreatment. This is allowed in the regulation. The same can also be seen for gasoline engines. One such example is the full load enrichment, which also increase emissions, albeit other emission components than NOx (e.g. CO, HC and PM). Without fuel enrichment many engines would destroy the catalyst, with even worse emissions as a result.

It is irrelevant whether the EGR should reduce at high rpm. The fact is it does not reduce on the dyno test bed while it does on the road. Therefore the defeat device does not only take rpm and torque into account because those parameters would be the same on the test bed or on the road. The defeat device also takes into account something else which distinguishes whether the vehicle is on the test bed or on the road. Perhaps steering inputs or stability control. In any event, a billion dollar fine should appropriately prompt an exhaust management software update.

^ That's not what the article says. The dyno test was done according to the NEDC, and I will guarantee that if the proper (prescribed) gear change points are followed and that driving cycle is followed, that engine will never come anywhere close to 3500 rpm in that test!

If you follow the NEDC on the road with the prescribed shift points, the results should be close to the same as on the dyno.

All combustion engines gasoline and diesel have protection strategies that temporarily emit higher than the prescribed emission limits if driven steadily under the conditions that trigger them (typically high load and high RPM). That's why the standards use average emissions over a driving cycle, not a do-not-ever-exceed limit!

I can only surmise that DUH is on a mission to attract attention to themselves.

Cars works because of the car engineers. These supposedly device cheats are been invented by the climate gang to collect big fines for themself. Stop publisching lies everywhere, all day long. These peoples inventing new rules everyday don't know a single thing about it.