At the Frankfurt Motor Show in September, Renault unveiled the SYMBIOZ autonomous, electric and connected concept. (Earlier post.) The automaker has now embodied many of the elements of the show car in a demo vehicle that is currently performing road tests to demonstrate under real-life conditions the benefits of such a car.

This demo vehicle embodies the brand’s mid-term vision before 2023 and previews technology Renault customers may find in its production car range in the near future. This includes an evolved version of MULTI-SENSE technology, which adapts the ambiance and driving experience to customer mood in the Mégane, Scénic, Talisman and Espace in the current range. The demo car also showcases features from the “EASY CONNECT”, new-generation mobility and connected services solutions, and previews the Renault Autonomous drive technology that will be progressively deployed in the range under the name “EASY DRIVE”. 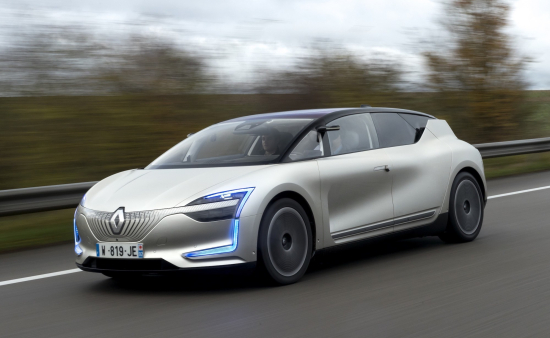 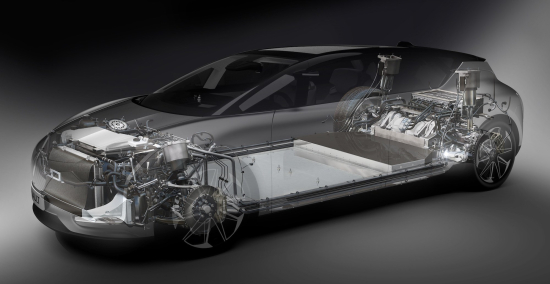 Autonomy. The SYMBIOZ demo car is capable of reaching SAE Level 4 autonomy (“mind-off”). Level 4 frees the driver from all dynamic driving tasks when the car’s automated driving system is switched on. The driver does not need to concentrate on the road ahead in case he or she needs to resume control; the car is capable of moving into a safe position if it cannot deal with an unexpected incident ahead.

On authorized highways or dual roads with a median strip, a Level 4 autonomous car such as the SYMBIOZ demo car can adjust the vehicle’s speed in accordance with the car in front, stay in its lane even when cornering, change lanes (i.e. to overtake another car or exit the highway) and function alone in traffic jams.

Level 4 driving automation is currently not permitted under French road rules. However, France’s road authorities (and similar organizations in other countries) allow trials to take place if someone is traveling in the car and can supervise the autonomous drive mode. This person needs to be able to take back control of the vehicle at any time. The SYMBIOZ demo car road tests will be conducted under these conditions.

Powertrain. The SYMBIOZ demo car features a dual-motor rear-wheel drive system. The two electric motors powering the SYMBIOZ demo car are located on the rear axle, with each motor driving one wheel. The car is equipped with Renault’s 4CONTROL all-wheel steering system, which enables the rear wheels to assist in steering by means of an electromagnetic actuator integrated on the rear axle.

The SYMBIOZ demo car delivers maximum power of 500 kW and 660 N·m peak torque (360 kW and 550 N·m continuous). The car accelerates from standstill to 100 km/h in 6 seconds. The 700V power supply enables a greater ramp-up in power.

The SYMBIOZ demo car is equipped with a 72 kWh battery pack. The vehicle architecture can accommodate batteries with a capacity of up to 100 kWh. The car’s batteries are charged via a cable plugged into a fast-charging point with a continuous current power supply.

During the road tests, the SYMBIOZ demo car will be charged at a charging point reaching 150 kW at certain times. The batteries can then be charged to 80% of their capacity in less than half an hour.

The driving mode is selected by pushing the Renault logo, which is lit up like a hologram in the middle of the steering wheel.

In AD mode the driver can choose from three layouts adapted to different free-time moods and desires. 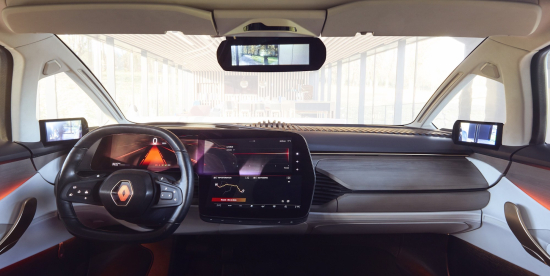 Connected. The SYMBIOZ demo car’s onboard connectivity system allows the driver and passengers to access their digital lives and indulge in a wide range of services. In harmony with personal smartphones, the users’ link to their media and data is never cut.

The SYMBIOZ demo car is connected to road infrastructure from Sanef’s network. Sanef is a subsidiary of the Albertis group, the world’s leading highway operator and one of Renault’s partners on this project. This vehicle-to-infrastructure (V2X) trial uses communication protocols defined under the EU’s SCOOP project. Some examples of public-private partnership opportunities:

Development. The SYMBIOZ demo car was developed simultaneously alongside the SYMBIOZ concept car at the ‘Garage’, a dedicated collaborative workspace at the Technocentre in Guyancourt, France. This project comprised cross-functional teams from engineering and design. It also included extended teams bringing partner technology and creative industry leaders together in an ‘open innovation’ approach.

The six core partners involved alongside Renault’s teams in the development of SYMBIOZ demo car provided input in their specific areas of expertise:

The chassis was developed on a test mule named Road Runner, which was one of the three test mules used for the prototype. Since the vehicle platform was conceived from the outset to accommodate an electric drivetrain, the position of the motors and batteries was optimized in order to deliver a maximum cabin space with no transmission tunnel. The rear-wheel drive system also enabled the front seats to be brought forward.

Alongside some interior and exterior styling elements, the technologies featured in the SYMBIOZ demo vehicle are an example of what could also appear in the Renault range over the next few months and years.

Autonomous drive features will be progressively deployed in Renault’s range under the name Renault EASY DRIVE. The first model to come out in 2019 will offer Level 2 driving automation with assisted eyes-on driving on motorways and in peri-urban areas. Cars with Level 4 mind-off driving automation will appear starting in 2022, pending government regulatory approvals.

Some examples of connected services and new-generation motoring will be rolled out cross the range under the name Renault EASY CONNECT and in conjunction with the new MY Renault smartphone app.

On 6 October, Groupe Renault announced Drive The Future, its new 6-year plan aligned with its vision of sustainable mobility for all, today and tomorrow. By 2022, Groupe Renault will offer 8 purely electric vehicles and 12 electrified models; 15 AD models benefiting from the Renault-Nissan-Mitsubishi scale effect and technologies; and 100% connected vehicles in key markets.