The New York State Energy Research and Development Authority (NYSERDA) and Verizon announced that Verizon has replaced 234 of its existing gasoline-powered vans with hybrid-electric vans for use in New York City. Verizon purchased the new vans using rebates offered through the New York Truck Voucher Incentive Program—the largest purchase of new vans in the history of the program.

The 234 new Verizon vans feature technology installed by XL Hybrids, Inc., and will increase fuel economy and reduce carbon dioxide emissions. While Verizon has upgraded some of its fleet to hybrids in the past, this is the largest commitment it has made to date and will help Verizon achieve its corporate goal of reducing its carbon intensity by 50% over the next decade.

The 234 Verizon vans are Chevy Express 2500 models. The XL3 hybrid-electric system which is being used on the vans saves fuel through regenerative braking, a process by which the XL3 electric motor helps slow the vehicle when the driver brakes, charging the battery. When the Verizon driver accelerates, the battery releases the energy to the electric motor, helping propel the vehicle. XL3 hybrid-electric technology leaves the Chevy engine, transmission, fuel system and exhaust system, as well as the complete Chevy warranty, completely intact. 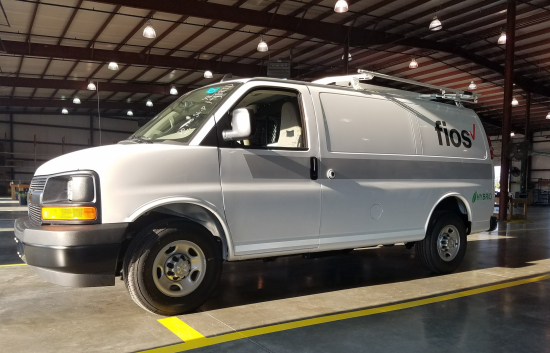 Given the size of our company and the number of people we connect across the globe, Verizon has a unique opportunity and responsibility to have a positive impact on the environment. We’ve deployed more than 24 megawatts of green energy capacity in the last five years with plans to deploy 24 more by 2025. And with the addition of these hybrid vehicles, our fleet is as efficient as ever as we continue to use less fuel year after year. We thank NYSERDA for their partnership in helping to make this happen.

The Truck Voucher Incentive Program provides point of sale rebates to reduce the cost for businesses and municipalities that want to purchase new clean vehicles or retrofit commercial vehicles and buses into hybrids, natural gas vehicles or zero-emission vehicles. Since 2013, it has provided almost 600 rebates for trucks and buses throughout the State. The rebate reduces the incremental costs of purchasing advanced alternative fuel technology heavy-duty trucks and buses by up to 80%.

The program is part of New York State’s overall clean transportation strategy to reduce greenhouse gas emissions. Earlier this year, Governor Cuomo announced the Drive Clean Rebate initiative, which has already provided more than $3 million in rebates to New Yorkers for the purchase or lease of electric vehicles. The state also launched a new electric vehicle campaign that includes the installation of charging stations and incentives for employers to encourage employees to drive electric vehicles, as well as the installation of charging stations along the New York State Thruway.

The Governor announced the availability of $2.2 million from the Environmental Protection Fund in rebates for municipalities to purchase or lease electric, (plug-in hybrid or battery) or hydrogen fuel cell vehicles for municipal fleet use, and for installation of public charging or fuel cell refueling infrastructure. The state has also revised regulations to clarify charging station ownership rules, and supported research and demonstration projects on new plug-in electric car technologies and policies.

Sounds like a high school shop cobble job when compared to a fully engineered hybrid like Prius or Fusion. For full fuel economy benefit, the ICE in a hybrid needs to operate on Atkinson cycle.

City vehicles that reduce pollution and imported oil are fine with me, I don't care about the engine cycle.

I agree with SJC. Anything that a) improves mileage and b) reduces cost, and c) reduces emissions is OK with me.

Im pretty sure that the older 234 vehicles been replaced were still good and now there will be surpluses of 234 good vans been scrapped instead of giving these still good vans to competitor delivery companies.

They could have used fully electric Nissan eNV200 or smarter vehicles.

XL is also a retrofit. That might not have been mentioned.

"With up to a 25% increase in MPG that translates into a 20% reduction in fuel costs." Per XL website