Italgas is renewing its entire company fleet with methane-powered vehicles from Fiat Chrysler Automobiles.The first deliveries have begun in Turin, with similar deliveries to be made in Rome and Naples—two of the main cities where the Italgas Group operates—over the next few days.

Currently, the Italgas Group’s fleet comprises 2,500 vehicles; over the next 12 months these will be replaced with the latest “natural power” FCA models: Panda, Panda Van, Fiorino, 500L, Doblò, Qubo and Ducato, all of them fueled by methane, in line with Italgas’ demands for sustainability and efficiency. 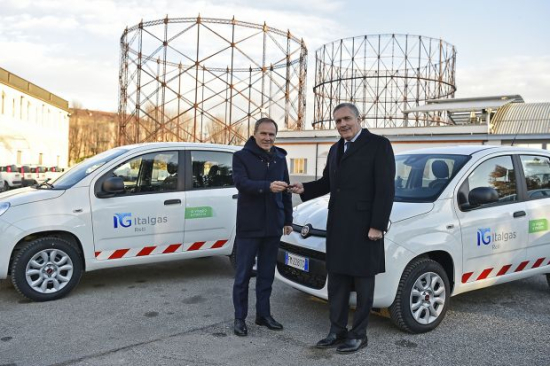 Italgas is the most important natural gas distributor in Italy and the third largest in Europe.

The conversion of the company’s fleet into methane gas—the first in Italy to be completely methane—is one of the initiatives launched under the Italgas 2017-2023 Industrial Plan, which also included the construction of more than 120 gas filling stations within the 40 suitable technical areas.

Using methane as a vehicle fuel reduces CO2 emissions by up to 43% (mixed with biomethane) and NOx and PM by 94-95%.