A pilot project, which is scheduled to start in the Spring of 2018, will offer an on-demand ridesharing service involving an initial fleet of 50 Mercedes-Benz vehicles in the eastern part of inner-city Berlin (the Friedrichshain-Kreuzberg, Mitte and Prenzlauer Berg districts). Passengers will use an app to call a local public transport vehicle at short notice to an agreed point. A large proportion of BVG’s existing stops, as well as additional virtual stopping points will be built into the virtual network of possible stops for the new on-demand shuttle service. 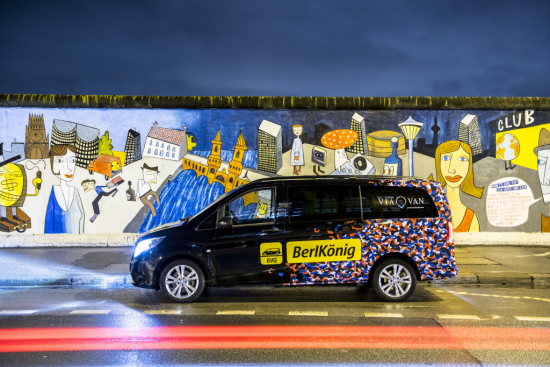 The aim is to expand the fleet over the course of the project to 300 vehicles.

This project in Berlin represents the first time that close integration of ridesharing and local public transport has been offered on such a wide scale, Daimler said. It will involve a range of different requested routes being packaged together.

Each journey starts and ends at a virtual stop and is shared with other passengers. The algorithms created by the software experts from Via allow the system to calculate in real time which journeys can practicably be packaged together without too many diversions. The concept is that the environment, local residents and passengers all benefit from the arrangement, as it means that there will be less traffic on Berlin’s streets and that attractive fares can be offered—amounting to a new form of local public transport.

The digital tariff that has been specially developed for this concept is made up of a basic rate plus a distance-based supplement, so pricing the service somewhere between the classic rate for local public transport and a taxi fare.

Booking the journey by app ensures that the price that will ultimately be charged is known when the booking is made and does not then change. If one person books a journey for several passengers together, a further discount becomes applicable.

The fleet is provided by the vehicle experts from Mercedes-Benz and will initially involve Vito and V-Class vans (Euro 6) with up to eight seats, plus all-electric Mercedes B-Class B250e cars with four seats. From next summer, the fleet will be enhanced by the arrival of the new, all-electric eVito Tourer, which will go into use in Berlin as the very first locally emission-free minibus operating anywhere in the world.

Over the course of the collaboration, which has initially been agreed for a period of around two years, the aim is to add the ability to request a vehicle with disabled access. What is currently being tested is not just how the concept copes with the capital city’s challenging traffic conditions, but also how it is accepted by the residents of Berlin. Subsequent expansion of the system to further areas of Berlin might be possible.

The BVG has applied for approval of the new transport proposal with reference to the experimental clause of Germany’s Passenger Transportation Act.

The BVG transport network currently comprises ten underground railway lines (U-Bahn), 22 tram lines and more than 150 bus lines, as well as six ferries, and provides mobility around the clock, 365 days a year. The 14,400 employees of the BVG corporation operate a fleet of around 3,000 vehicles, serving more than 3.5 million inhabitants across a catchment area that covers some 1,000 square kilometers. More than a billion passengers use the buses and rail-ways operated by the BVG every year.

Shared driverless small (6 to 10 passengers) e-vehicles, with on demand door-to-door service, may be one of the best near future way to reduce ICEVs traffic and pollution in city cores.

The current 20+ major manufacturers could join their efforts to design and produce the most effective/efficient units.