Transit bus ridership in the US historically has been higher than transit rail ridership. In 1990, for example, there were 5.74 billion unlinked bus trips (64.1% of the total), but only 2.89 billion rail transit trips (32.3%), according to data gathered by the US Department of Energy (DOE). 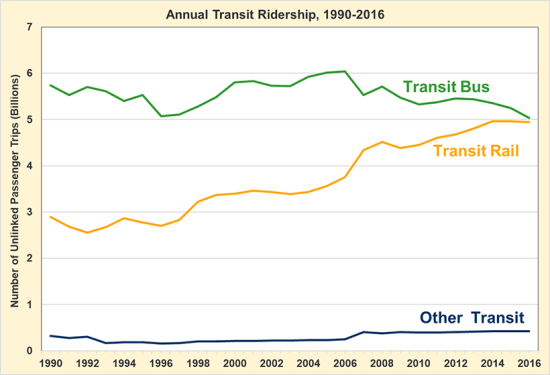 This appears to be changing, however. Transit rail, which includes heavy rail, light rail, and commuter rail, has experienced increasing ridership over the past six years, while transit bus ridership was mainly decreasing.

In 2016, transit rail ridership was 4.94 billion trips (47.5%) and transit bus ridership was 5.04 billion trips (48.5%). The number of rail transit systems operating in 2016 was roughly double that of 1990, accounting for some of the increase. However, transit bus ridership and transit rail ridership are both affected by factors such as the economy, gasoline prices, and more recently, ridesharing services.

Rides sharing with small (6 to 10 passengers) diverless e-ADVs will probably compete with private cars, buses and trains in post 2020/2025 years.

Fully automatic driverless Subways could also be one of the best way to reduce ground city cores traffic jams, pollution and GHGs.