Titan LNG: ~11% of newbuilds in 2017 were LNG-powered; tipping point for marine fuel

Titan LNG, a full service supplier of LNG to the marine and industrial markets in North West Europe, reported that in 2017 around 11% of all new build contracts were LNG powered ships, a trend it expects to continue during 2018. The supplier suggests that LNG adoption as a marine fuel has passed the tipping point. 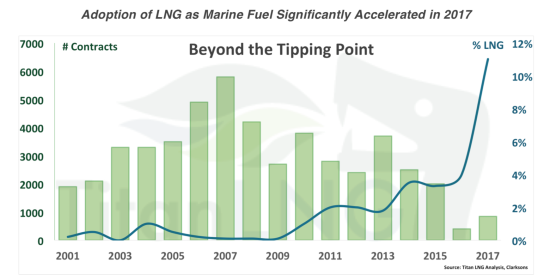 The order book for LNG-powered ships grew substantially in 2017, the LNG bunkering infrastructure is maturing and the pricing of LNG has become structurally competitive versus MGO (marine gas oil).

Ship owners are facing a choice with 2020 approaching: run on MGO, HFO (heavy fuel oil) with scrubbers, or LNG. Titan LNG believes that scrubbers can only be a temporary solution and that LNG-fueled ships, combined with power-to-gas or biogas offer a credible and cost competitive path to decarbonization and improved air quality.