Average US new vehicle fuel economy in December down from November; 2017 average unchanged from 2016

The average fuel economy (window-sticker value) of new vehicles sold in the US in December was 25.0 mpg 9.4 l/100 km)—down 0.2 mpg from the revised value for November, according to the monthly report from Dr. Michael Sivak and Brandon Schoettle at University of Michigan Transportation Research Institute (UMTRI).  This drop likely reflects the increased proportion of light trucks versus passenger cars in the sales mix, they suggested. The average fuel economy of new vehicles sold in the US 2017 was 25.2 mpg (9.33 l/100 km), unchanged from 2016. 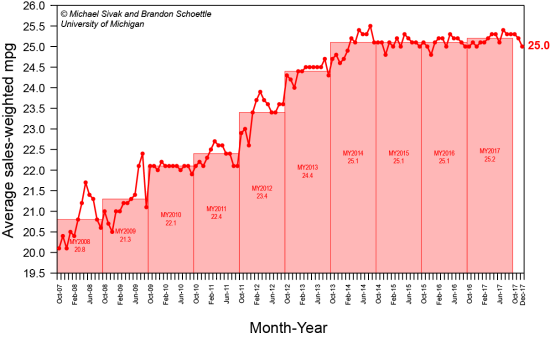 The University of Michigan Eco-Driving Index (EDI)—an index that estimates the average monthly emissions of greenhouse gases generated by an individual US driver—was 0.83 in October 2017, unchanged from September 2017 (the lower the value, the better).  The EDI indicates that the average new-vehicle driver produced 17% lower emissions in October 2017 than in October 2007, but 5% higher emissions than the record low reached in November 2013. 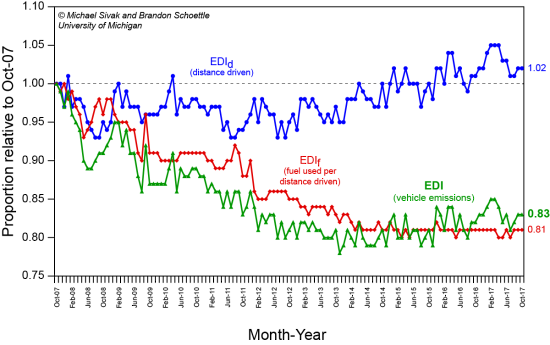 In the real world, average fuel economy in USA is probably closer to 20 mpg than the reported 25 mpg.

Real progress in the last 10 years or so has been close to zero.

Basically, for 99% of users; have more $$$ = driving heavier gas guzzling vehicles to compete with the neighbours.

Are they computing this for only the vehicles with an engine or they are including the BEV (Battery Electric Vehicles) as well.

Anyway the sales of CUVs, Pickups, SUVs have increased and still the fuel economy remained the same in 2017 compared to 2016. That means the average vehicle has become more fuel efficient.