US regular retail gasoline prices averaged $2.41 per gallon in 2017, 27 cents/gal (13%) higher than in 2016, but two cents/gal less than in 2015, according to the US Energy Information Administration (EIA). Higher crude oil prices in 2017 contributed to higher gasoline prices. 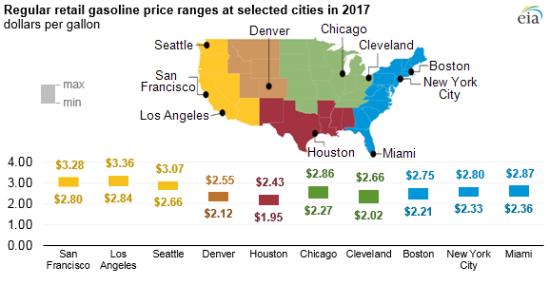 In 3 of the 10 cities for which EIA collects weekly retail price data, gasoline prices exceeded $3.00/gal at least once in 2017, and prices in every city except Houston exceeded $2.50/gal at some point in the year. Of the 10 cities for which EIA collects data, retail prices in San Francisco were the highest for all but 13 weeks of 2017. San Francisco prices peaked in November at $3.28/gal.

On 25 August, the landfall of Hurricane Harvey resulted in refinery and infrastructure outages in the Gulf Coast, which led to increased gasoline prices, particularly along the East Coast and Gulf Coast.

Must ne thanks for the given this nice article have to connect find where do i find my computer windows 10 and save the all setting in system for seen all folder.