AkzoNobel Specialty Chemicals and Gasunie New Energy are partnering to investigate the possible large scale conversion of sustainable electricity into green hydrogen via the electrolysis of water. Intended for Delfzijl in the Netherlands, the installation would use a 20 megawatt water electrolysis unit, the largest in Europe, to convert sustainably produced electricity into 3,000 tons of green hydrogen a year—enough to fuel 300 hydrogen buses. A final decision on the project is expected in 2019.

The planned 20 megawatt facility would be an important step towards scaling up the electrolysis technology. So far, the largest planned electrolysis unit in the Netherlands has a capacity of 1 megawatt. The eventual aim is to be able to build installations that convert and store sustainable energy in the form of hydrogen on an even larger scale (from 100 megawatts). 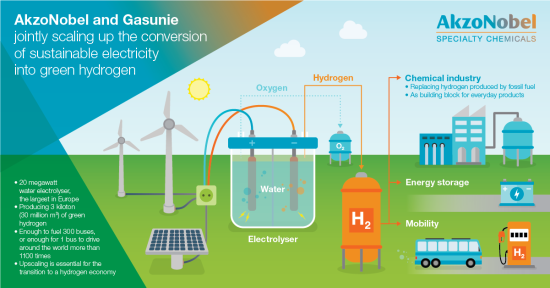 AkzoNobel and Gasunie complement each other in the required expertise for this project, which includes gas transport and storage, electrolysis and handling of hydrogen. Both companies want to play an active role in the transition to a CO2-neutral economy, and the project is in line with their respective initiatives in renewable energy, including hydrogen.

Achieving the Netherlands’ CO2 reduction targets and the corresponding transition in the energy system will be a huge challenge. This requires not only vision, but also immediate action and concrete collaboration. We see ‘power to gas’ not only as a promising technology, but also as one that will be necessary to achieve a fully sustainable energy mix by 2050. Hydrogen also plays a crucial role in achieving the emission reduction target set by the Dutch government for 2030, i.e., a reduction of CO2 emissions by 49% compared to 1990. To make sure we have enough hydrogen in 2030, we will need to take steps now to validate the technology at different scales.

Industry is important for the economy, but is also responsible for a large percentage of CO2 emissions. Only with far-reaching change of its industrial activities can the Netherlands achieve the international climate targets. During this transition, new value chains and revenue models can emerge across sectors through collaboration between companies. The vast majority of the more than 800,000 tons of hydrogen used by Dutch industry each year is produced using natural gas. Replacing this by sustainably produced hydrogen will reduce CO2 emissions by seven million tons. However, the real potential is in large-scale production as the basis for green chemistry.

Both companies agree that the northern part of the Netherlands is perfectly positioned to develop a green hydrogen economy, due to the large-scale production and import of green electricity, the existing chemical industry, the current gas transmission infrastructure, the knowledge infrastructure and the support within the Northern Innovation Board.

Eventually, smaller H2 production facilities, operating outside peak demand hours, could produce H2 at much lower cost while maximizing the use/efficiency of REs.

With more residences, commercial facilities and farms being equipped with their own clean energy supplies; Quebec Hydro, local NG and heating oil suppliers, are already feeling demands reduction. For the fist time, many Hydro facilities had to reduce production and dump excess water. The construction of major new hydro facilities is being delayed, at least till the arrival of many more electric vehicles.

Alternatively, with the same amount of electric power, they could power 600 battery electric buses.

Yep, all the engineers are obviously idiots who can't add up, and for some strange reason went with the renewable power not being available necessarily at the same time as the draw was required.

You have all night to charge the batteries and both power demand and transit demand is generally less at night.

There is zero solar at night, and wind is far more variable.

That can be smoothed by storing it as, for instance, hydrogen, but you cannot guarantee having renewables available when you need to charge a car.

The high proportion of BEVs which could be run without major modifications of the grid would do so courtesy of running fossil fuel plants more of the time.

And the disparities are much, much worse in, for instance, Northern Europe in winter.

Guesstimating 46 kWh/kg-H2, the average power consumption for making 3000 tpy comes to 15.7 MW, a capacity factor in excess of 78% (the capacity factor would be higher if the efficiency is lower).  To put it bluntly, this unit will NOT be consuming "excess" wind generation or following wind-farm output; it is going to run largely if not mostly on fossil and nuclear electricity.

This is a grossly inefficient way to use electricity.  Figuring 100 km per kg-H2, this is 460 Wh per km.  A Tesla consumes roughly half that.  sd nailed it.


all the engineers are obviously idiots who can't add up

The engineers are being paid to promote "green" politics.


There is zero solar at night, and wind is far more variable.

The plant isn't going to be running on ruinables.  At least actinides aren't affected by the weather.

You are aware that the German government just dropped its carbon goals, aren't you?  There's no way to both de-nuclearize and de-carbonize.  Berlin chose lignite.

I was also going to point out that the Netherlands does not have excess renewable energy. It is a little hard to find current hard data but it appears that the renewable segment of the Dutch electric energy production is about 10% but this may include biomass co-firing of coal plants. Apparently, they are buying about 600,000 tons of wood pellets a year from the US. I find it a bit hard to accept this as completely "renewable" but is available at night. They have recently closed some coal plants but brought one new unit online in 2015 and 2 units online in 2016.

Since you imagine that you are such a superior being that snottiness is allowable and is not simply and ingrained character defect occasioned by your ill judged over evaluation of your own merit, I am interested neither in your opinions nor discussion.

They do say that they are including imported renewables.

I would imagine the plan is similar to that in the UK, to use wind power from the North sea as the costs of offshore drops, which seems to be happening reasonably well.

BTW, if I had my way I would simply build small nuclear which could indeed cut out a lot of the inefficiencies of conversion etc, but we are not doing that, so I try to look at what we are doing, rather than concentrate on what is not happening.

NuScale is working on the small modular reactor and is making progress on getting a Design Certification from the Nuclear Regulatory Commission (NRC) and just yesterday cleared one hurdle. They have an initial customer, Utah Rural Power and an approved site on the Idaho National Lab grounds so there is hope.

Then if Terrapower can get their wave reactor working and certified, the nuclear waste problem is solved and we can work on removing the ugly wind turbines that are cluttering our environment.

As I've always said, hydrogen is a solution in search of a problem.

This should tell you something.

For about half the price of a low charge TESLA Model S100D you can drive a very quick charge, all weather, extended range FCEV?

It's quite fair to compare slow-filling (5-10 minutes) FCEVs with fast-charging (80% in 5 minutes) Enevate batteries... especially when the batteries can be charged in motion on the road.

1) Enevate fast-charging batteries are NOT (yet) in use in any mass produced BEVs.

2) No mass produced BEVs are (yet) equipped to use none existing in motion charging facilities nor beamed microwaves.

How can one compare high performance FCEVs with none existing BEVs with similar capabilities?