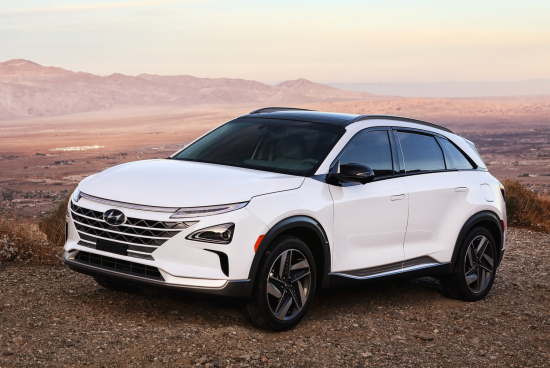 Hydrogen energy is the key to building a more sustainable society. Hyundai Motor Company has already taken a lead in hydrogen technology with introduction of Tucson fuel cell. Yet as another result of this earth-saving effort, today, I am so proud to introduce to you our second-generation Fuel Cell Electric Vehicle which is a culmination of our cutting-edge technologies.

NEXO is Hyundai’s second-generation of commercialized fuel cell electric vehicle that will be available in select markets around the world starting in early 2018. Improving upon the Tucson FCEV, the NEXO has an estimated driving range of 370 miles, 105 miles more than its predecessor. Acceleration and power have increased to improve the overall performance.

Designed to handle extreme temperature and environments, the NEXO testing has proven that the vehicle is capable of starting after being subject to overnight temperatures of -20 degrees Fahrenheit. NEXO boasts cold start capability within 30 seconds which is an industry-leading achievement and the fuel cell system warms up faster for maximum performance. The NEXO also has excellent cooling performance on steep grades with temperatures exceeding 120 degrees Fahrenheit.

Improvements in the air supply system, performance at high altitudes and refueling times, along with overall efficiency and fuel economy put the NEXO in a class all its own. In addition the NEXO has improved power density and durability comparable with a gasoline-powered vehicles.

For the first time, Hyundai’s fuel cell vehicle is built with a dedicated vehicle architecture. This architecture has many benefits including:

NEXO maintains the quiet and comfortable driving characteristics of the Tucson FCEV; all of the NEXO’s moving parts are inside the engine bay which isolates the noise to one area. 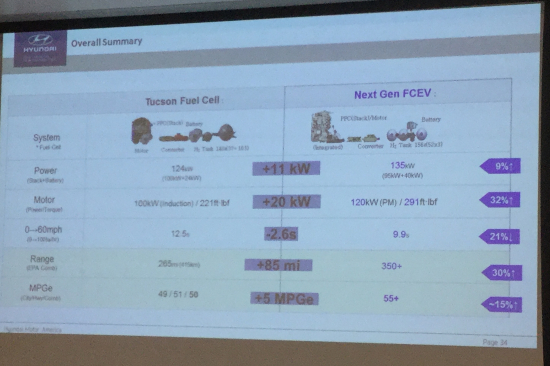 All NEXO specification and technologies mentioned may vary according markets.

New advanced driver assistance technologies to be deployed in NEXO include:

A hand to Hyundai for the many valuable improvements over previous FCEV model. The 600 Km range is remarkable. Will that extended range be available/possible in all weather conditions?

The battery/FC combination is a wise solution for short and long trips.

With near future H2 at around $2.00/Kg, FCEVs will quickly become very competitive to operate, specially in cold snowy areas.

Others (even Toyota) will have to catch up.

Cold weather will of course hit the range, but nothing like to the extent it does in a BEV, and without the very high pollution of ICE cars running inefficiently in the cold.

IMO this car crosses the line to real practicality, and I may even take a look at it as my next car in three years or so, when my present one is up for renewal.

I can't believe they're still pushing this joke.
Time for CARB to cut the funding.
FCV are the worse auto "solution" ever imagined.
-No fueling infrastructure
-Guaranteed high prices as they'll need to convert methane to hydrogen. The energy used for the conversion can be used directly in EV's.
-The rate of progress in battery's also made this obsolete last year.
-There is No Social Good, to this project either: There's NO Carbon Benefit.

It might suit me as I fancy going electric, they are looking at converting the NG grid to deliver hydrogen in the UK, and I have nowhere to plug in a car.

Not in your universe?

Mike,
Try not to state you opinion as if it is THE opinion.
There is room for lots of opinions, no one has a monopoly on truth.

Pictures of the interior and exterior here:
http://www.greencarreports.com/news/1114636_production-hyundai-nexo-hydrogen-fuel-cell-suv-appears-at-ces#image=100638575

I thought that they might have needed to encroach on the boot, but it has all the space you would expect in this size and class of vehicle.

I am a bit disappointed that there is no HUD

I think this is a great step, addressed several problem areas. Would be nice to include a charge port, (didn't see it mentioned).

I would imagine, a FC plugin with substantial battery range would appease most critics here, other than the ones that shout foolcells from the roof tops as if it were the end times.

It's definitely shaping up to be an interesting future. We have pathways to power hydrogen vehicles from methane more efficiently than from methane to electricity then to a plugin... Short of a solely nuclear or a geothermal future, hydrogen makes sense in this diverse world, as does bevs, but to argue one doesn't belong because of corporations, or apparent progress in BEVs. Come to think of it, with carbon neutral power, it really doesn't matter what we power.

/sarcasm Davemart don't you know every outlet in the world is a charge port for BEV, and a level one charger should be practical for every person on the planet, because one can charge while they sleep?

A PHEV FCEV would be handy for many, although still of limited usefulness for the many with nowhere to plug in.

Much better, and smaller, batteries would help this sort of design, which is one of many reasons why I have never thought that FCEVs and batteries are in conflict.

I do think thought that there is a fair chance that costs for hydrogen can be reduced to low enough levels that plugging in is not needed.