General Motors has filed a Safety Petition with the US Department of Transportation (USDOT) for GM’s fourth-generation self-driving Cruise AV—the first production-ready vehicle built from the start to operate safely on its own, with no driver, steering wheel, pedals or manual controls. 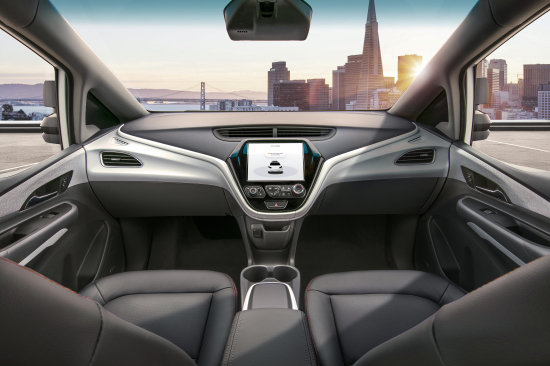 The Cruise AV is equipped with five LiDARs, 16 cameras and 21 radars. These sensors and cameras all scan both long and short range, with a 360˚ view around the vehicle. With its laser measurements, LiDAR provides precise feedback for both fixed and moving objects. Radar’s electromagnetic pulse measurements are complementary to LiDAR because they can detect solid objects that have low light reflectivity.

GM is using both LiDAR and rara inputs to measure the speed of moving objects, allowing quick determinations of speed.

The cameras measure the light intensity reflected off or emitted from objects, providing rich detail. GM combines camera and LiDAR data to classify and track objects. This helps, for example, in identifying pedestrians, determining vehicle types, and detecting road details such as lane lines and signage.

A number of systems work together to deliver the self-driving capabilities based on the perceived data form the sensors: 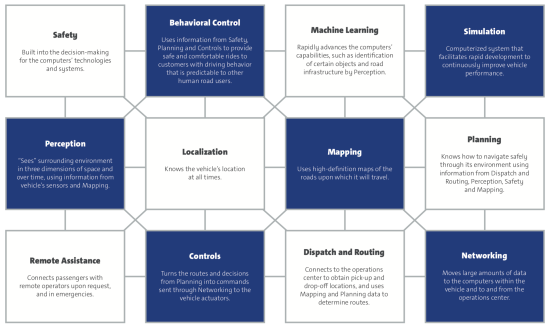 Systems diversity and redundancy is key to the safety of the Cruise AV: 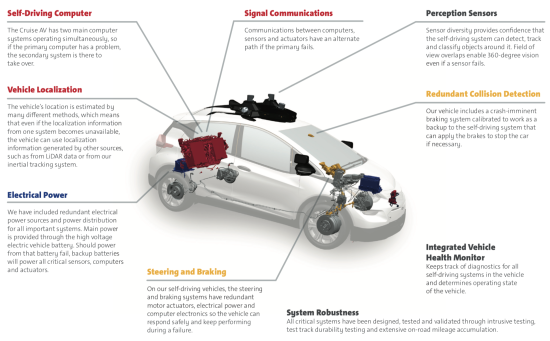 I am a little surprised that this will be ready in 2019 although I assume that it is just for testing and will not be released for sale to the general public in 2019. However, the article does say that it is production ready.

Nah, they have been perfecting these types of systems for decades, what's changed recently is we have the compute power to actually map our environment real time.

Ford will be launching similar technology; same with Tesla, and many others.

I say the more the merrier when it comes to this new tech. This will make cars really interesting, it will definitely change the market greatly.

Reading some of the GM Self Driving Safety Report, it seems that the cars will initially be used only in certain areas of certain cities and will not be sold but will be used for a GM run ride share system. There are not for sale to the general public. Also, the cars are using the Chevy Bolt Electric Car as a base.

There is a lot of unknowns still with a self driving car, but it's going to take off, and fast.

Some sort of electric makes sense, I'd wager hybrids of some sort would be the preferred way, or very large BEVs, i think it's like ~2000w of compute power and sensors keeping the occupants safe.

Ford is doing fleet sales for ride sharing too , then i think the goal is 2025 to offer it to the public, it's been a while since i read the press release.

It is a common practice in the I.T.related industries to offer,promise and often sell technology that does not exist. Delivery deadlines can be often delayed. Large systems which were never capable of the task have been delivered into markets and there many multi million $ examples in Govt's (but not exclusively.)

The tech's and programmers etc are on 'work till you drop' orders from management who expect the impossible - yesterday. The task to bring the system together on the fly might see devices that don't even exist in the imagination being developed and built at the same time as other parts of the package are being modelled refined and produced.
When they say 'production ready' that comes from the managers rather than the shop floor and should be seen in the industry context.
Lots of pressure on everyone seems to be the normal work environment.
I suppose this reality has been common practice for thousands of years.

The fact that GM is actually talking about something in the future other than obsolete ICE powered Vetts is good news.

An eCab would be useful with adaptive routing, if someone is on the way it picks them up seating 4.

Are you sure you want to share a cab with someone random who you don't know?

Are you sure you would want your daughter to share a cab with someone random who neither you nor she knows?

It is your choice, people ride the subway every day.

Arnold, I could not agree more. The hype will lead real-world capabilities by decades. Will earn lots of clicks and comments, though.

Fully autonomous driving will happen, but it will not happen nearly as quickly as these optimistic announcements would indicate.

The vehicles will be limited to low speeds, special areas that have reduced traffic complexity.

Raise your hand if you have ever had to reboot your Tesla nav while driving.

This is not a swipe at Tesla, it's the simple reality that computers encounter far too many abnormal situations to operate without a human monitoring the situation and being available to sort out unanticipated situations, abnormal operation, and external attacks.

Adaptive cruise control and assisted braking are great safety features. But if you've ever driven a Tesla in lane keeping mode, you know how often you have to take over steering on a seconds notice because the system lost track of the lanes or couldn't handle some object in the path. The technology is a long way from handling every situation that will be encountered on the public roadway.

I think this is a publicity stunt. Agreed it will be for testing, but they can't roll out profitable cars at this price point - but maybe they just want a jump on the competition / news cycle ( Tesla? )...

Navigant reported that tesla and apple were near the bottom of autonomous cars, and GM as a leader. Ford moved from top to fourth place.

Cost doesn't matter, if fleets can remove drivers, the car will pay for itself in a year, or less depending on utilization.

The public will get a shot at autonomous after 2025, by then we'll have advance tracking cameras(low cost/tech) and better smaller and cheaper lidar.

The NVidia solution for a processor looks complicated, i don't know if it's made to be 100% redundant, but they have two cpus and two gpus on thier board.
I think AMD and Intel should get on board, both have solutions that can greatly reduce the complexity by combining chipsets.

I'm optimistic, but i realize that there are several benefits that far outweigh the cost. No driver, utilization nearly 100% of the time, and greater telematics, less serious accidents. Computers can out drive humans/professionals, even on racetracks.

Look who is pouring the money into this, and what thier goals are. Ford, Chevy, Uber, Waymo, and other want a taxi fleet.
Volvo wants a trucking one. These are all coming to replace hired drivers. That's just the first wave. For the cost to matter, it would have to cost more than one or two drivers cost year over the lifetime of that vehicle. (which could be hundreds of thousands of dollars)