The German Aerospace Center (Deutsches Zentrum für Luft- und Raumfahrt, DLR) and the US National Aeronautics and Space Administration (NASA) are conducting joint research flights in Germany for the first time. The focus will be on alternative fuel emissions and the characterisation of ice crystals in condensation trails (contrails), using biofuel as an example.

The first joint DLR/NASA flights, which were conducted from Palmdale, California in 2014, showed that adding 50% alternative fuel for cruising flight reduces the soot particle emissions of an aircraft engine by 50 to 70%, compared to the combustion of pure kerosene. (Earlier post.) 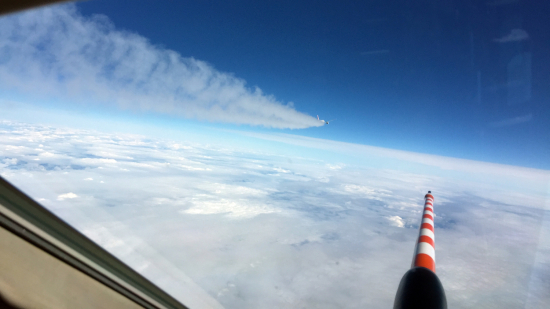 Flying behind the A320 ATRA with the Falcon.

The planned research flights are intended to determine particle emissions and how they affect cloud formation through contrails, thus investigating their impact on the climate.

NASA’s DC-8 research aircraft are visiting Germany for three weeks and will fly together with the DLR A320 Advanced Technology Research Aircraft (ATRA). The research flights will start from Ramstein Air Base.repv

The joint research flight campaign has been given the title ND-MAX/ECLIF 2 (NASA/DLR-Multidisciplinary Airborne eXperiments/Emission and CLimate Impact of alternative Fuel).

We have installed instruments on board the DC8 to simultaneously measure the size distribution of soot and ice particles and gas emissions as it follows in the wake of ATRA. The focus of our measurements is to characterise the emissions produced using different fuel blends. We are particularly interested in finding out how the soot emissions of the different fuels affect the radiation properties and lifetime of the contrails.

—Hans Schlager from the DLR Institute of Atmospheric Physics

For the international research mission, the DLR A320 ATRA will fly using various fuel blends, while NASA’s fully instrumented DC-8 flying laboratory will follow at a safe distance, measuring soot particles, gas emissions and ice crystals in ATRA’s exhaust gas stream. Numerous DLR measuring instruments have been installed on board the NASA aircraft for this purpose.

We are currently in the process of delivering the fuels that have been specially produced for these test flights. We have created fuel blends that contain 30 to 50 percent Hydroprocessed Esters and Fatty Acids (HEFA), which will be used in a total of eight planned joint research flights.

The HEFA biofuel selected for these trials is largely derived from the oil of Camelina plants, representative of alternative fuels, which could also be synthetic.

In addition to the emissions, the international research team is interested in how the different fuel blends affect the performance of the engines.

Biofuels such as HEFA differ in their composition from conventional kerosene in that they are pure paraffins and contain no cyclic hydrocarbons. When mixed with conventional jet A-1 kerosene, one obtains an approved fuel. The modified fuel composition has an impact on the formation of soot during combustion.

—Patrick Le Clercq of the DLR Institute of Combustion Technology

In recent years, several research campaigns into alternative fuels have been conducted in the United States and Germany under different meteorological conditions.

Earlier NASA-led research campaigns, called ACCESS I and II (Alternative Fuel Effects on Contrails and Cruise Emissions), were carried out in California in 2013 and 2014. (Earlier post.) During these campaigns, NASA’s DC-8 flew with alternative fuels, while smaller research jets such as the NASA HU-25 Falcon and the DLR Falcon 20 conducted measurements in its exhaust stream.

The ECLIF campaign followed in 2015 and was led by DLR in Germany, with the involvement of a number of NASA researchers. (Earlier post.) In this campaign, the DLR A320 ATRA flew with alternative fuels, while the DLR Falcon 20, equipped with instruments, followed behind, carrying out measurements of the emissions and contrails. In addition, extensive emissions readings were carried out from the ground.

Previous results from research flights have shown a significant reduction in soot particles when alternative fuels are used and suggest that this also leads to a lower quantity of ice crystals in contrails.

This is a significant issue because contrails and the cirrus clouds that are formed as a result are thought to have a greater warming effect on Earth’s atmosphere than the total carbon dioxide emissions that have accumulated as a result of air travel over the last century or more.

Contrails contain many small ice particles that form due to the condensation of water vapour on the soot particles in aircraft exhaust gases. Contrails can linger for several hours in humid, cold conditions at altitudes of between eight and 12 kilometers, forming high-level clouds called contrail cirrus. Depending on the position of the Sun and the ground, these clouds can have a local warming or cooling effect. Knowledge of this is essential for assessing the climate impact of aviation.

The winter meteorological conditions in Germany are favorable for the upcoming DLR/NASA flights and the planned measurement of ice crystals in contrails. The use of the DLR A320 ATRA as a source of emissions and the NASA DC-8 as a measuring platform will allow the researchers to conduct their flight tests at the altitude and usual cruising speed of passenger jets, under which conditions contrails typically form. To this end, the researchers have installed the most extensive range of measuring equipment ever employed for such investigations in the DC-8, with half of the measuring devices provided by the DLR Institute of Atmospheric Physics.

A total of 80 flight hours for taking measurements are planned between 16 January and 2 February.