FCA pulled the wraps off the new 2019 Ram 1500 at the Detroit Auto Show. Overall weight for the Ram 1500 has been reduced by 225 pounds (102 kg). As the truck’s backbone, the frame uses advanced materials and engineering to eliminate 100 pounds while increasing stiffness and durability for 12,750 pounds of towing capability and 2,300 pounds of payload.

An all-new 48V eTorque mild-hybrid system delivers improved fuel efficiency for both 3.6-liter Pentastar V-6 upgrade and 5.7-liter HEMI V-8 configurations. The eTorque mild hybrid system is one of several changes made to the powertrains for the 2019 Ram 1500. The changes include upgraded TorqueFlite eight-speed automatic transmissions, strategic weight reductions and innovations, such as quickly heating lubricants to minimize viscosity-related efficiency losses.

eTorque. The eTorque mild hybrid system replaces the traditional alternator on the engine with a belt-driven motor generator unit that performs several functions. The motor generator unit works with a 48-volt battery pack to enable quick and seamless start/stop function, short-duration torque addition to the engine crankshaft in certain driving situations and brake energy regeneration, which improves responsiveness and efficiency. 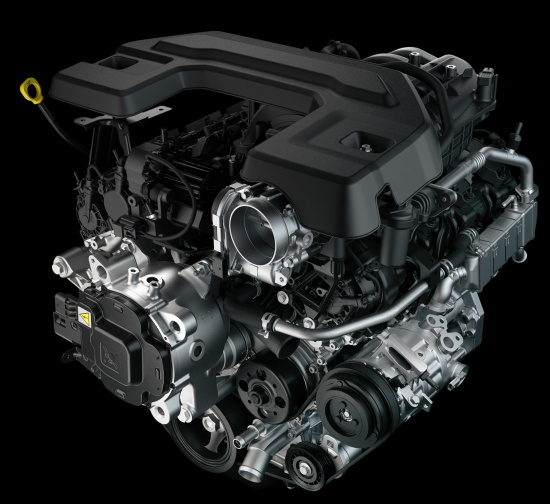 The small-suitcase-sized, air-cooled battery pack mounts to the rear wall inside the Ram 1500’s cabin. The case is insulated to dampen noise from the dual cooling fans. Cooling air is drawn from inside the truck and vented via the built-in cabin exhausters.

The V-6 and V-8 engines with eTorque retain a conventional 12-volt starter motor, used for cold starts and first start of the day due to its greater efficiency in extreme temperatures.

In addition to spinning the engine for restarts, the eTorque also recaptures energy during deceleration and braking to feed charge to the battery pack. eTorque also enhances the driving experience of the 2019 Ram 1500 by adding torque to the crankshaft during gear changes to minimize noise, vibration and harshness (NVH). 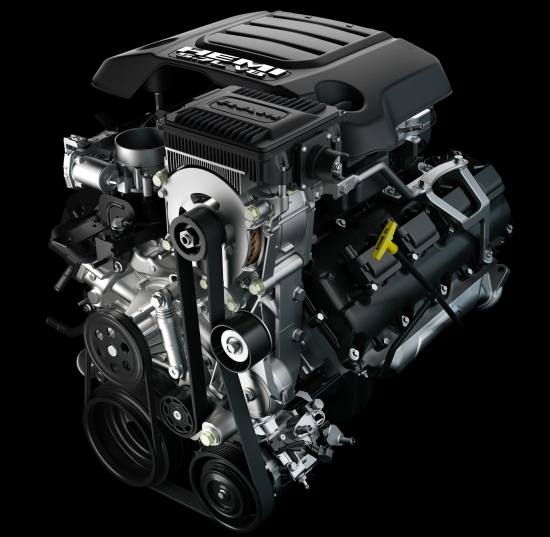 Both eTorque motor generator units employ a pair of belt tensioners to keep the 8-rib drive belt tight when the unit is generating electricity or adding torque to the crankshaft.

The 5.7-liter HEMI V-8 will also be available without the eTorque system.

The upgraded version of the Pentastar V-6 is the standard engine in most trim levels of the 2019 Ram 1500, specifically tuned for truck duty and rated at 305 horsepower and 269 lb-ft of torque.

The Pentastar V-6 uses an 11.3:1 compression ratio but runs on regular 87-octane fuel to reduce the cost of ownership.

In the 2019 Ram 1500, the 3.6-liter Pentastar V-6 engine is available in most configurations, including the four-wheel-drive powertrain and Crew Cab models.

With Fuel Saver Technology, the engine control computer turns off fuel and spark, and closes the valves to four of the engine’s eight cylinders during light load operation, such as highway cruising when full power is not needed.

For the 2019 Ram 1500, FCA engineers broadened the operating zone of the Fuel Saver Technology via the addition of a pair of active vibration dampers, mounted on the frame, and Active Noise Cancellation technology in the truck cabin. The expanded range of operation yields an additional 0.5 miles per gallon (mpg) on the highway. Transparent to the driver, the system operates between 1,000 and 3,000 rpm while continuing to enable V-8 power for acceleration and heavy loads.

Variable valve timing helps maximize fuel economy by reducing the engine’s pumping work via a delayed closing of the intake valve, which increases the expansion process of the combustion event.

Another change for the HEMI V-8 in the 2019 Ram 1500 is the switch to an electric cooling fan, replacing the previous 400-watt electric/mechanical fan hybrid setup. Precisely controlled by the engine control computer, the new 850-watt electric fan, mounted to the radiator, uses Pulse Width Modulation to tailor the fan’s energy draw to the cooling demand. Eliminating the traditional fan blade mounted to the front of the engine helps improve fuel economy by reducing parasitic losses and fan noise.

iDFSO. The V-6 and V-8 powertrains in the 2019 Ram 1500 also reduce fuel consumption with an Interactive Deceleration Fuel Shut Off (iDFSO) feature that pauses fuel flow to the engine cylinders when the vehicle is decelerating. For the 2019 model year, the iDFSO feature is improved to be active in third gear and higher.

There are more than 40 individual shift maps, to optimize shift changes and points for fuel economy, performance and drivability. Shift strategy takes into account a number of variables, including:

The transmissions use shift-by-wire technology, eliminating a mechanical linkage between the transmission and the gear selector. The 2019 Ram 1500 retains an innovative rotary e-shift dial mounted on the left side of the instrument panel’s center stack, thereby freeing up space traditionally occupied by a console- or column-mounted shift lever.

The TorqueFlite 850RE and 8HP75 transmissions use identical gear ratios. Sixth gear is a direct drive, while gears 7 and 8 have overdrive ratios. The wide gear ratio spread helps maximize fuel economy by helping lower engine rpm in city and highway driving. Internally, both transmissions have four gear sets and five shift elements (multi-disc clutches and brakes). Only two shift elements are open at any time. With fewer open shift elements, drag losses due to multiple parts rotating relative to one another are reduced.

Thermal management. Today’s Ram 1500 employs a thermal management system that taps into heated engine coolant to speed up the warmup of automatic transmission fluid and engine oil to maximize the fuel saving benefits of those fluids.

The 2019 Ram 1500 takes that strategy a step further with an industry-first patented application that uses heated engine coolant to warm up the rear axle lubricant of 4x2 trucks.

The engine control unit manages a three-way valve in the engine cooling circuit. Heating the truck cabin always takes priority, based on the HVAC temperature setting. Once heated, the valve routes coolant to the rear axle, where it circulates through a cavity in the double-layer axle cover to warm the gear oil. The warmed gear oil is less viscous and brings the axle to peak operating efficiency faster. Also, the system helps prevent the rear axle from exceeding maximum temperatures during demanding conditions such as hauling and trailer towing.