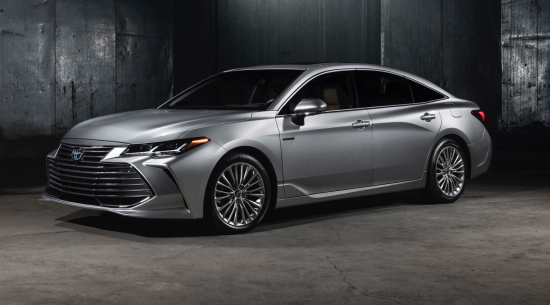 The VVT-iW system is employed on the intake cycle, with VVT-i (Variable Valve Timing - Intelligent) activated on exhaust. With VVT-iW in place, engineers ensured optimal torque creation at all engine speeds, and minimized pumping losses during the closing of intake valves, which furthered fuel efficiency. The use of Atkinson cycle, too, reduces the V6’s fuel appetite, particularly in cold climates or during wide-open throttle (WOT) situations.

A new torque converter provides a wider range of lock-up operation (versus the outgoing 6-speed automatic transmission) to imbue a more enveloping and direct driving feel. The converter contributes to low fuel consumption and passenger comfort, since engine revving is kept to a minimum.

New for 2019, the highly compact battery pack now resides under the rear passenger seat (instead of the trunk), as a result of improved TNGA packaging and for the betterment of a lower center of gravity. THS II’s new lighter, smaller Power Control Unit (PCU) packages microcontrollers within a power stack structure that’s located above the transaxle—all with the goal of lowering mass to better handling composure.

Efficiencies on many levels are seen with the implementation of the new PCU. Energy loss in the conversion efficiency of the transaxle and electric motor is reduced by approximately 20%, and its cooling system’s energy loss is cut by approximately 10%. The PCU’s DC-DC converter—which converts a direct current from one voltage level to another—is optimized to reduce overall power consumption. Dimensionally, DC-DC converter’s output filter is smaller, lighter, and quieter for an improved passenger experience.

Auto Glide Control (AGC), yet another of Avalon’s fuel-saving technologies, automatically calculates efficient coasting. When driving normally, engine braking will slow the vehicle down when the driver lifts off from the accelerator pedal. However, to avoid aggressive engine braking, AGC limits the loss of vehicle speed through an automatic drive setting that acts more like a neutral gear, allowing the vehicle to coast to the stoplight.

A light indicating “AGC” is illuminated on the Multi-Information Display (MID) when AGC is active to alert the driver that less deceleration torque than normal is currently being used. AGC can only be activated when the vehicle is being operated in the ECO drive mode setting.

A new Sport drive mode applies power from the hybrid system for improved acceleration and, as a bonus, all drive modes, including Sport, can each be used while EV mode is activated. With Shiftmatic technology, XSE trim drivers can “shift” through the Continuously-Variable Transmission’s six simulated gears via steering-wheel mounted paddles or the gearshift.

AVS relies on three primary systems to accomplish its mission: shock absorbers at each corner that have solenoid control valves for independent wheel control; advanced front and rear G Sensors to comprehend the vehicle’s condition; and, an intelligent central ECU that reacts to the G Sensor’s observations by dictating exact damping adjustments to the shock absorbers’ solenoids.

The new multi-link rear suspension allows for the enhancement of many positive performance attributes, such as a wider rear track, lower center of gravity, and an aggressive stance. Revised trailing arms have been installed at a higher position to place the pivot axis of the tire rearward for better bump absorption. The setup’s shock absorbers are tilted forward, too, to realize a suppler ride. Bushings on the trailing arms and arm joints further mask passing road imperfections.

Although not equipped with AVS, XLE, Limited, and XSE take full advantage of their innately sporty platform and multi-link rear suspension and, to them, add thicker stabilizer bars and stiffer spring rates for maximum handling dexterity. Spring stiffness, for example, is increased 25% when comparing XLE to Limited; stabilizer bar stiffness is up 38% and 62%, front and rear, respectively, when progressing from XLE to XSE.

Design. Leveraging the adaptable TNGA core, the Calty team penned Avalon’s exterior to be longer, lower, and wider than before. Never-before-accomplished stamping methods also aided in the deep draw panels that express distinguishable sculpted forms. Complex surfaces could now be shaped, such as at Avalon’s door handles that coincide with its profile’s bold character line. A distinct, carved lower rocker panel behind the front wheels visually exemplifies the benefits of TNGA.

Avalon extends its rear cabin farther by another 7 inches, and elongates side quarter glass and downward tapered C-Pillar by 2.2 inches. Engineers and designers implemented a 0.31-inch radius corner—the tightest ever for Toyota—fore of the steep pillar.

Reads like most of the improvements are on the ICE side with just some minor size reduction and conversion efficiency gains on the electric side. Surprised there's no mention of a Lithium Ion option.