EPA recently released the latest edition of its annual report Light-Duty Automotive Technology, Carbon Dioxide Emissions and Fuel Economy Trends. The report is the authoritative reference for real-world fuel economy, technology trends and tailpipe carbon dioxide emissions, for new personal vehicles sold in the US every year since 1975.

The report found that fuel economy for the US fleet continues to improve. Model year (MY) 2016 vehicle fuel economy was 24.7 mpg (9.51 L/100 km), slightly higher than MY 2015, and a record high overall. Since MY 2004, CO2 emissions and fuel economy have improved in ten out of twelve years, and decreased only twice. CO2 emissions have decreased by 102 g/mi, or 22%, and fuel economy has increased by 5.4 mpg, or 28%, with an average annual improvement of about 0.5 mpg per year. The report also identified a number of contributory trends, including:

Fuel economy continues to increase while weight and power have leveled off. Vehicle weight and power are two important design parameters that help determine a vehicle’s CO2 emissions and fuel economy. For nearly two decades through MY 2004, on a fleetwide basis, automotive technology innovation was generally utilized to support vehicle attributes such as weight, performance, utility, and other attributes rather than fuel economy or CO2 emissions.

Beginning in MY 2005, technology has generally been used to increase both fuel economy and power, while keeping vehicle weight relatively constant.

The 2.1% increase in truck share offset the weight reductions in cars and trucks, so that overall new vehicle weight was relatively unchanged.

Average new vehicle horsepower (hp) was also basically unchanged in MY 2016, as the average vehicle was 1 hp higher than MY 2015. With an average 230 hp, new vehicles remain at a record high average horsepower.

Preliminary MY 2017 values suggest that average weight will be up 9 pounds and horsepower up 2 hp. EPA will not have final MY 2017 data until next year’s report. 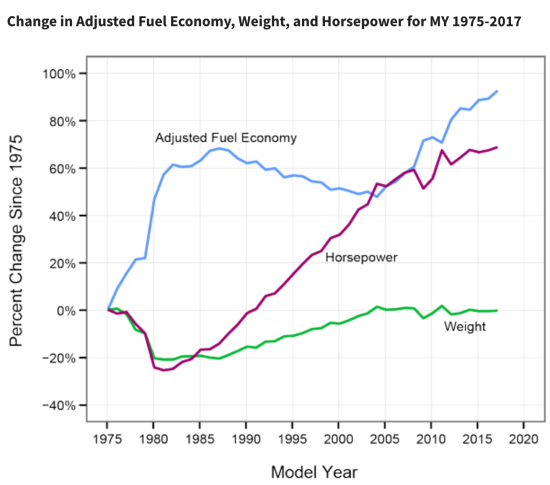 Average new vehicle footprint remains stable. Footprint is an important measure of vehicle size that is defined as the area enclosed by the tires of the vehicle (i.e., wheelbase multiplied by average track width). Both the GHG emissions and fuel economy standards rely on footprint to determine vehicle GHG and fuel economy targets. EPA began collecting industry-wide footprint data in MY 2008.

The overall new vehicle average footprint has also been stable between MY 2008 and MY 2016. The overall average is influenced by the trends within each vehicle type, as well as the mix of new vehicles produced. Since MY 2008, market share has shifted towards car SUVs and truck SUVs, and away from cars, pickups, and minivans/vans.

Preliminary MY 2017 values are essentially unchanged from MY 2016. The overall new vehicle average footprint is projected to stay the same, at 49.5 ft2. 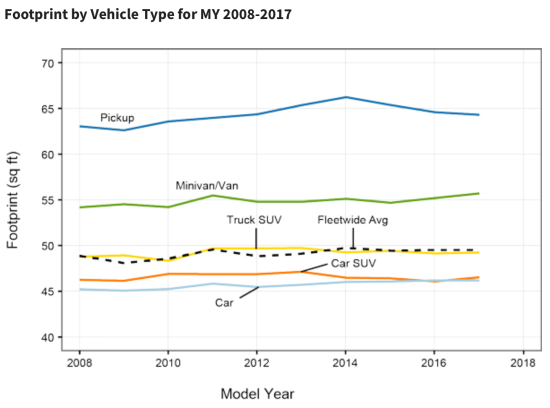 Other findings from this year’s report include:

Car SUVs had the largest production share increase of any vehicle type in MY 2016, up 1.3 percentage points to a record 12% of all production. Truck SUVs reached a record market share of 29%, resulting in a record 41% market share for combined SUVs in MY 2016.

Technology adoption. Gasoline direct injection (GDI) has achieved widespread use by many manufacturers and is projected to be used on over half of all vehicles in MY 2017. This is particularly impressive, EPA noted, since GDI was used in fewer than 3% of vehicles as recently as MY 2008.

All Mazda engines are projected to use GDI in MY 2017, with several other manufacturers at nearly 100% adoption. Turbochargers, which are often used in conjunction with GDI, have also increased market share to 25% in MY 2017, led by BMW, Mercedes, VW, and Ford.

Transmission technology has also changed rapidly with about 24% of MY 2017 vehicles projected to use transmissions that have seven or more speeds, with an additional 24% relying on continuously variable transmissions (CVT). Subaru, Nissan, and Honda are leading in adoption of CVTs, while Mercedes, BMW, and Fiat-Chrysler lead in the adoption of transmissions with seven or more speeds. Mercedes and BMW are the leading manufacturers for non-hybrid stop/start, and GM and Honda are utilizing cylinder deactivation the most.