Housed underneath the Forte’s longer hood is a second-generation 2.0-liter Nu four-cylinder engine that benefits from Atkinson Cycle technology and a cooled EGR system. Typically applied to hybrid and electric vehicles, the Atkinson Cycle and cooled EGR technologies are designed to help boost fuel efficiency. The new powerplant can be paired with either a six-speed manual or Kia’s all-new Intelligent Variable Transmission (IVT). The engine and in-house-built IVT are the first of a new line of efficient “Smart Stream” powertrains that will make their way into the Kia lineup in the future. 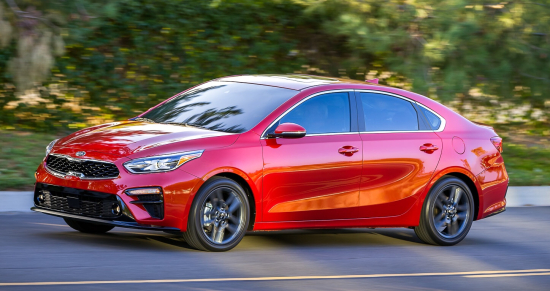 Kia said that waiting before it developed its own continuously variable transmission (CVT) allowed engineers to research issues often associated with CVTs and apply their findings in the application used in the Forte. One of the main criticisms is that CVTs can create a rubber-band-like feel. In an effort to address this issue, engineers built the IVT with adaptive style shift logic with a chain-type belt instead of push belt, a first in the compact class.

This results in smooth and linear acceleration, and for a more enjoyable and sporty driving experience, a step-shift-like feel mimics a conventional automatic at wide-open throttle or when more acceleration is needed.

Noise is another issue CVTs can sometimes face and engineers worked hard to reduce this in the Forte by wrapping the transmission case in a sound-insulating cover to help quiet the typical “drone” associated with this tech from other OEMs. In doing so, NVH levels are also reduced by 5dB.

Horsepower and torque are expected to remain unchanged from the 2018 Forte, delivering an estimated 147 HP and 132 lb-ft of torque. Efficiency was the top priority and the IVT, together with the 2.0-liter engine, is estimated to return up to 35 MPG combined, about a 3 MPG improvement over the current vehicle. Official EPA fuel economy ratings will be announced closer to the Forte’s arrival in the US later this year.

Because body stiffness plays a major role in NVH performance, engineers worked to increase rigidity for a quieter cabin and better handling tuned to match the Forte’s sporty and dynamic exterior appearance, resulting in a 16% stiffer body in white. New subframe designs help to improve lateral responsiveness, while steering feel is upgraded compared to its predecessor’s due to enhancements within the Motor Driven Power Steering (MDPS) system that reduce artificial steering feel and friction.

The Forte comes standard with an 8-inch color touchscreen with Android Auto and Apple CarPlay that’s integrated neatly on the dash and within the driver’s line of sight. With select smartphone devices, the system also has the capability to read SMS texts aloud through Bluetooth. Eliminating the need for a charging cord is an available wireless charging tray perched up on the center stack for compatible Android devices, as well as Apple iPhone 8 and iPhone X.

Kia’s suite of Advanced Driver Assistance Systems (ADAS) offered in many of the automaker’s more expensive vehicles make their way down into the Forte. In addition to Blind-Spot Collision Warning (BCW) and Lane Keeping Assist (LKA), the all-new Forte is available with Forward Collision-Avoidance Assist (FCA) and Smart Cruise Control (SCC). Smart Cruise Control is designed to maintain a pre-set distance between the Forte and the vehicle in front and can slow the vehicle slows with traffic in certain circumstances.