Home About Contact RSS GCC Twitter Newsletter
Magna introduces high-definition ICON RADAR for automotive applications; scans in 4 dimensions
PwC: by 2030, the transport sector will require 138M fewer cars in Europe and US; vehicle stock in China to climb ~50%; traffic to be heavier

A new study by the International Council on Clean Transportation (ICCT) has analyzed the fuel efficiency of 20 airlines operating nonstop flights between the mainland United States and East Asia and Oceania in 2016. The ICCT team found that the difference in efficiency performance between two co-leaders and the least fuel-efficient carrier, Qantas Airways, was 64%—the widest gap identified in similar ICCT studies of aviation fuel efficiency to date.

(Starting in 2013, the ICCT began assessing the fuel efficiency of US airlines on domestic operations for 2010, with subsequent updates for 2011 through 2014. In 2015, the ICCT compared the fuel efficiency of 20 major airline operating in the transatlantic market, specifically nonstop passenger flights between North America and Europe. This lateset report extends the previous work on airline efficiency to the transpacific market.)

At the other end of the spectrum, the study attributes Qantas’ inefficiency to that fact that it operated aircraft with higher fuel burn at very low passenger and freight load factors. Overall, freight share of total payload was the most important driver of transpacific fuel efficiency in 2016, accounting for nearly half of the variance across carriers.

This research shows that there are a variety of ways that international airlines can reduce fuel use and carbon emissions. Buying new aircraft, carrying large numbers of passengers, and optimizing freight strategies all make a difference.

The report also assesses key drivers of the observed fuel efficiency gap across carriers. Factors include aircraft fuel burn, seating density, passenger load factor, and freight share of total payload. Of these, freight share was found to be the most important driver overall, explaining almost half of the variation in airline fuel efficiency across carriers, followed by seating density, which accounted for nearly one quarter of the variation. Aircraft fuel burn and passenger load factors were relatively less important. 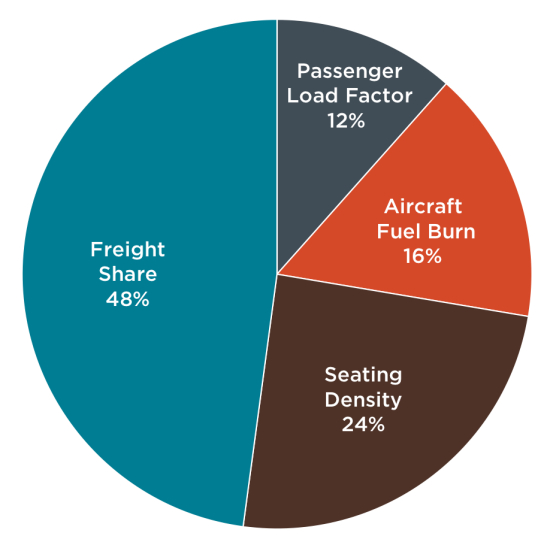 Theres a reason airlines around the world are starting to avoid very large aircraft like the 747 and A380. Newer twin-engine widebodies provide the payload and range capabilities needed for transpacific flights with much lower fuel burn.

Aviation accounts for about 2.5% of global CO2 emissions. The International Civil Aviation Organization (ICAO) forecasts airline traffic in Asia/Pacific will account for 31% of CO2 from international aviation in 2020, with North America at 15%. In order to achieve ICAO’s long-term, aspirational goal of increasing the fuel efficiency of international flights by 2% annually, more fuel-efficient wide-body aircraft will need to be introduced to keep up with demand.