PwC: by 2030, the transport sector will require 138M fewer cars in Europe and US; vehicle stock in China to climb ~50%; traffic to be heavier

Five trends are transforming the automotive industry, according to PWC: electrification, autonomy, sharing, connecting and yearly updating, a combination the consultancy is now labeling “eascy”.

In a report exploring the impact on the trends on the industry in 2030—“eascy – The five dimensions of automotive transformation”—PwC suggests that as a result of novel sharing concepts, the stock of cars could fall from 280 to 200 million in Europe and 270 to 212 million in the United States. China, in contrast, is expected to see its vehicle inventory rise to 280 million vehicles in 2030, up from 180 million today.

However, although vehicle stock could fall significantly in Europe and the US in 2030, traffic on the roads will become even heavier, PwC suggests. And although the number of new registrations will rise considerably, many conventional manufacturers and suppliers will come under pressure. 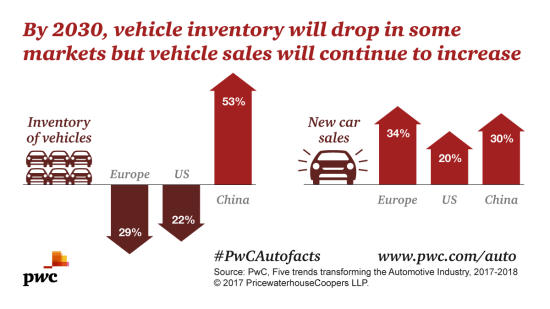 This picture only appears to be contradictory. This automotive revolution will see many rules that the industry has become accustomed to over many decades being turned on their head.

Of particular importance here is the growth of low-cost sharing concepts predicted by PwC. As a result of this development, today’s norm where most people drive themselves in their own vehicle will only be one mobility concept among many, says Christoph Stürmer, Global Lead Analyst at PwC Autofacts. The PwC study anticipates that as early as 2030, more than one in three kilometers driven will be under one of the many forms of sharing.

This trend towards sharing will be coupled with two megatrends in automotive technology: the electrification of drive systems and huge advances in the development of self-driving cars. Under PwC’s scenario, by 2030, 55% of all new vehicles may be electric cars, while the conventional combustion engine will slowly die out.

Developments in Europe and the US are expected to happen at a roughly parallel pace. In China, by contrast, the penetration of shared and autonomous mobility will happen faster than in the Western world. This could make China the leading market for the transformation of the automotive industry.

The various different trends will reinforce each other. For instance, electric vehicles are less susceptible to failure thanks to their simpler power train—which is a significant advantage where vehicles are being shared and used more intensively. Self-driving cars, in turn, could effectively become ‘robotaxis’ if they are combined with sharing concepts.

Taken in combination, the various megatrends will mean that road traffic as a whole will change radically. With more and more people turning to car-sharing models, there are likely to be far fewer car owners by 2030. However, at the same time individual traffic will increase massively. Personal mileage in Europe could rise by 23% by 2030 to 5.88 billion kilometers. Forecasts predict an increase of 24% in the US and 183% in China.

Aside from population growth, one of the reasons for this is that self-driving vehicles will also be used by people who cannot drive today themselves. Another reason is that the development of fully-autonomous cars means that there are likely to be empty trips, because clearly the ‘robotaxis’ will have to travel from A to B to collect new passengers.

The PwC scenario assumes that the number of annual new registrations in Europe may increase by one third to more than 24 million cars by 2030; this would be the only way to compensate for the higher wear and tear on cars due to car-sharing concepts. For the US, PwC Autofacts assumes that there could be growth of 20% and new car sales of almost 22 million in the year 2030. For China, a rise of over 30% to 35 million units sold is expected.

This large volume will require car manufacturers and suppliers to make additional investment in new production and development capacity for new, highly specialized vehicle concepts at much lower prices.

Automotive groups and their suppliers will have to make critical decisions in the years ahead, said Stürmer. On the one hand, while they will have to contend with falling margins—mainly due to pressure from the major fleet operators—at the same time they will have to significantly increase their investment in new factories, electro-mobility and the other megatrends.

Simultaneously, new competitors from the technology industry will see the opportunity to push into the market. A parallel study from PwC strategy consulting firm Strategy& has estimated that conventional players’ share of global industry profits may fall from the current figure of 85% to less than 50% by 2030. Stürmer’s forecast is therefore that:

In this scenario, the only companies that can survive in the long-term are either those that prevail as a clear innovation leader on the product side, or those that recognize that mobility is no longer a product, but rather a service and offer their customers comfortable and low-priced offerings that are simple to use—in other words, offerings that make their life ‘eascy’.

So, I've just spent some time in Manilla, and used ridesharing everywhere. I don't think robotaxis will boost the miles driven too high, because it's not economical to run long point to points(time and fuel costs). Many times while i was in this current form of taxi, before i was dropped off, the driver had already selected his next pickup, usually with in a few blocks of my drop off. On top of that, passengers can opt to carpool through an app and it procedurally places them with other passengers with similar trips at a lower rater upfront. It doesn't always pair up, but when it does it makes use of the available seats in the car or suv.

Yes, the traffic was bad, but it was always moving. I don't think Manilla was designed to have so many registered cars in the city. Some of the main sources of congestion i witnessed came from old military trucks converted to taxis, bus lanes where cars darted in and out of to pass, lane sharing with motorcycles, and large buses. It's really hard to describe the scene, it was chaos but it worked. A large portion of the vehicles were ride sharing or proper taxis(private ownership is rare, outside of ridesharing). I say chaos because people were turning right from a left turn lane, or from all lanes; rules and street signs really didn't matter, intersections were blocked constantly, tons of situations that happened as i witnessed them would bring about elevated levels of traffic.

I think a portion of the traffic could be mitigated there by better enforcement of the rules/better adherence to them. Which is the same reason i would be afraid to have autonomous cars there.

One other thought i had on the article was the notion of increased new cars sales. Yes, i understand that miles driven will climb, but i don't feel that necessary means they will run out faster. The switch to electric, or some sort of hybrid adds so much available longevity to the car. It would be futile not to recognize this. We will be approaching minimal returns on all technology, upgrades from 90s-late 2000s were a huge jump. Like the article says it's a service, a service strives for profitability, replacing whole cars routinely just because of an arbitrary mileage number like 100k miles should die out with the 80s. We have ICEs today that can handidly get to 500k miles(from any maker), electric motors could last the consumers lifetime, this service style or transit will drive cars into the grave. Look at almost any taxi service, those cars are used cars to begin with sometimes, and then, they are used till it costs more to repair them than drive them. I remember just looking at odometers of taxis in the junk yards, many where over 300k miles, some even higher.

We have lots of technology that will push for longer life cycles of vehicles. Not to mention forces like newer vehicle prices climbing because of all the technology. Aluminum and composites will add both to price and to longevity. Electrics as I've stated before will add to longevity. Less accidents, less overall individual ownership, and there will be less reasons to purchase a new car.

We are going to be on the verge of cars serving as a movie theater, a lounge on wheels, a place to relax, like an extension of your home(with WiFi) if you're a private owner; rather than a point A to point B Product. And the service cars will likely mimic too. It will be like a piece of furniture or like a mobile couch in a mobile living room. That sort of differentiation will lead to longer than average ownership.

I'd wager in 2030, ownership drops two car households become one, or become less frequent buyers. Robotaxis pickup the torch. Ownership might drop 25% in the US, and maybe more in Europe.
.Everyone drives more miles, traffic might see a bump. Average fleet age i would suspect would rise in the US. Gasoline sales would likely be halved or 30% of what they are today. If fuelcells prove to fleets to be economical, diesel could fall even lower, as cost of fuel is critical in long range hauling, short and medium range will likely see BEVs replace ICEs, we could use about 15% of what we use today by 2040. As cost is a huge motivator.