A low-cost, nanostructured composite material developed by researchers at UC Santa Cruz has shown performance comparable to Pt/C as a catalyst for the electrochemical splitting of water to produce hydrogen. An efficient, low-cost catalyst is essential for realizing the promise of hydrogen as a clean, environmentally friendly fuel.

Researchers led by Shaowei Chen, professor of chemistry and biochemistry at UC Santa Cruz, incorporated ruthenium ions into graphitic carbon nitride/reduced graphene oxide (rGO) hybrids to form Ru−C3N4/rGO composites. They found that the incorporation of Ru ions, at a loading of 1.93 at. %, leads to electron redistribution within the materials and significantly enhanced the hydrogen evolution reaction (HER) performance over those of other carbon-based electrocatalysts (C3N4, C3N4/rGO, and Ru−C3N4, with an overpotential of only −80 mV to reach a current density of 10 mA cm−2, a Tafel slope of 55 mV dec−1, and an exchange current density of 0.462 mA cm−2. This performance is comparable to that of Pt/C. 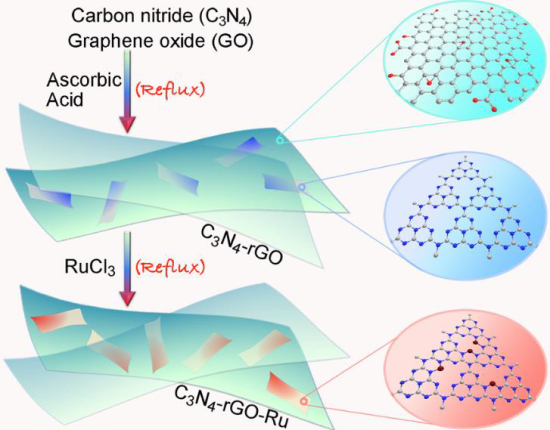 Mechanistically, effective electrocatalysts are required to achieve a high hydrogen generation rate as hydrogen evolution reaction (HER) involves multiple electron-transfer steps. Thus far, platinum-based materials supported on carbon exhibit the best electrocatalytic performance for HER; yet wide-spread commercial applications are hindered by the low natural abundance and high costs of platinum. In recent years, a variety of transition metal-based materials have been found to show apparent electrocatalytic activities towards HER. However, durability remains an issue because of corrosion of the catalysts in acid electrolytes, a common medium for HER. Carbon-based materials (such as graphene, carbon nanotubes, and amorphous carbon) have also been explored as viable catalysts for HER. Yet, thus far the activity has remained markedly lower than that of state-of-the art Pt/C.

The remarkable performance was accounted for by electron redistribution upon the incorporation of ruthenium ions into the C3N4-rGO composites, which led to efficient narrowing of the material bandgap, enhanced electric conductivity and charge carrier density, increasing number of active sites and reduced charge-transfer resistance. Such synergistic interactions among the structural components (C3N4, rGO, and Ru ions) highlight an effective strategy in the rational design and engineering of functional composites in the development of high-performance HER electrocatalysts.

Despite electrocatalytic performance comparable to that of commercial platinum catalysts, researchers still have a long way to go to achieve cheap and efficient hydrogen production, Chen noted.

This method may have the potential to further reduce the energy required and cost to mass produce H2 in the near future.

Together with improved FCs, near future all weather FCEVs, will soon become competitive with all weather extended range BEVs?

From Wikipedia: "Ruthenium is usually found as a minor component of platinum ores; the annual production is about 20 tonnes."

Also, the article did not claim to reduce the energy required.

I think there have been several breakthroughs on here that seem to work better at least on paper.

I'm not saying people shouldn't try, but they should accept that some technology could be out matched quickly.

The one that bubbles methane through a catalyst that generates pure carbon, and pure hydrogen so efficient and scalable that it looks to be disruptive to every existing way of making hydrogen, and it would probably give Harvey his $2/kg after tax hydrogen.

I don't think we as a society need to stop using resources, but just need to use them in the most responsible way, hydrogen from methane soon might be better than electric from methane. In that process we generate useful byproducts. Most cases hydrogen from electric isn't pretty, nor traditional means from methane, but it's rapidly changing for the better.

Those better battery breakthroughs 5 years ago that we've heard about will likely be in factories soon, hopefully. Which means about another 5 years before we see them in vehicles.

We need companies to take greater risks, either consortium up with others, pool the money in R&D try out these fledgling technologies and try and bring them to market.

I think we just hit a dead end, we get the research, says battery x will change the future, yet battery/technology x disappears. We don't have big movers, ones with infrastructures or budgets in place to deal with the multitudes of failures and cost of using these researched options.

We need something like big oil/tech to swoop in and try to branch out. They have infrastructure, they have R&D budgets, they have manpower, and they need a way out of non -renewable liquid fuels. Otherwise, all these technologies are just interesting talk someone needs to invest.