Toyota Tsusho, the trading arm of the Toyota Group, has signed a Share Subscription Agreement with Australian lithium miner Orocobre to become a 15% shareholder on a fully diluted basis by private placements and participation in Orocobre’s public accelerated entitlement share offering, announced in conjunction with this investment. The total investment amount will be about A$292 million (US$232 million).

Lithium demand is expected to continue growing with the shift from fossil-fuel powered vehicles to electric vehicles (EV), in addition to the steady growth of lithium-ion batteries for electric devices. Demand growth to date has seen the lithium price more than doubled in the past few years.

Toyota Tsusho and Orocobre have been long-term partners in the development of the Salar de Olaroz Lithium Facility in Jujuy Province in northern Argentina, a lithium brine project, which was brought into successful production in 2014. The operations are at an altitude of 3,900 metres above sea level and produce lithium carbonate from the Salar de Olaroz brine resource which contains high concentrations of lithium and potash brine. 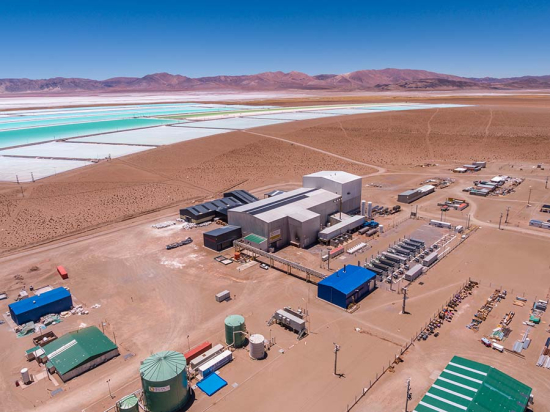 Olaroz hosts a JORC/NI43-101 (mineral reserves reporting standards) compliant, high quality, low-cost and long life resource. The measured and indicated resource of 6.4 Mt LCE is capable of sustaining current continuous production for 40-plus years with only ~15% of the defined resource extracted.

The processing method at Olaroz is based on existing brine treatment operations with modifications tailored to suit the brine chemistry and climatic conditions at Olaroz. Lithium brine operations typically have a much lower cost of production than hard-rock lithium deposits. The cash operating cost of approximately US$3,500/t positions the Company as being one of the lowest cost lithium producers globally.

The processing method begins with the extraction of lithium-rich brine from bore fields drilled on the salar. The brine is then transferred to a series of evaporation ponds which utilize solar radiation and wind for evaporation and concentration along with a precipitation process to remove impurities. The concentrated brine is then fed into the lithium carbonate plant which precipitates, filters and dries the finished high-quality lithium carbonate product.

After seven years of planning, developing, construction and commissioning, the first sale of lithium carbonate from the Olaroz Lithium Facility occurred in late April 2015 and volumes have been increasing since that time.

Toyota Tsusho, being exclusive sales agent for the Project, has established a worldwide sales network for lithium from Olaroz since the first production.

Through this investment, Toyota Tsusho and Orocobre will elevate their existing long term project partnership to a new level of strategic alliance. The capital injected by Toyota Tsusho’s strategic investment will be used primarily for the expansion of the Olaroz Project (Phase 2), which targets 25,000 tonnes per annum(LCE) of additional capacity.The expansion will potentially bring the total nameplate capacity of the Olaroz Project to 42,500 tonnes per annum.

The Stage 2 expansion plan is expected to reach its final investment decision in mid-2018 once financing, approvals and engineering are completed, with commissioning in 2H 2019. As a key part of this strategic investment, Toyota Tsusho will be appointed as the exclusive sales agent for Phase 2 production and will secure a long term stable supply of lithium products to respond to the growing market demand.

Together with Orocobre as a strategic partner, Toyota Tsusho will accelerate not only the expansion of the Olaroz Project via development of Phase 2, but also develop the value chain via joint investment in a Lithium Hydroxide project in Japan.