The US Energy Information Administration’s (EIA’s) January 2018 Short-Term Energy Outlook (STEO) forecasts that natural gas will remain the primary source of US electricity generation for at least the next two years. The share of total electricity supplied by natural gas-fired power plants is expected to average 33% in 2018 and 34% in 2019, up from 32% in 2017. EIA expects the share of generation from coal, which had been the predominant electricity generation fuel for decades, to average 30% in 2018 and 28% in 2019, compared with 30% in 2017. 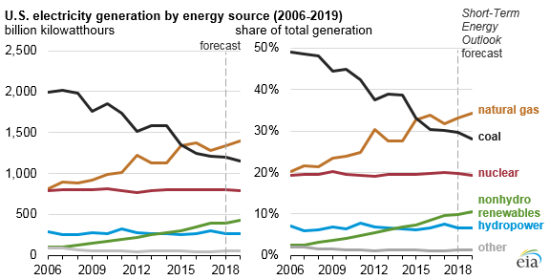 Power plant operators are scheduled to bring 20 gigawatts (GW) of new natural-gas fired generating capacity online in 2018, which, if realized, would be the largest increase in natural gas capacity since 2004. Almost 6 GW of the capacity additions are being built in Pennsylvania, and more than 2 GW are being built in Texas. In contrast, about 13 GW of coal-fired capacity are scheduled to be retired in 2018. These changes in the generating capacity mix contribute to the continuing switch from coal to natural gas, especially in southern and midwestern states. 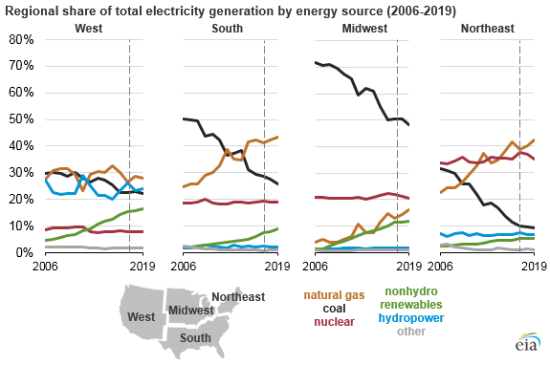 EIA expects the average annual US share of total utility-scale generation from nonhydro renewables to exceed 10% for the first time in 2019.

Watch for a rapid shift to SOFCs from turbines. Electricity can be produced with natural gas, but it is clean, can be distributed and is rapidly dispatched. Corporations will do the investing -- Apple, Amazon, Walmart, and many other large installations. They will become the energy providers.