Nanyang Technological University, Singapore (NTU Singapore) and BlueSG Pte Ltd, a subsidiary of Blue Solutions owned by the Bolloré Group, have launched Singapore’s first flash-charging electric shuttle. Named the NTU-Blue Solutions Flash Shuttle, the fully electric vehicle only requires 20 seconds to recharge at stations which are fitted for its quick charging while passengers board and alight.

It uses Bolloré’s Bluetram vehicle, which aims to be as efficient as tram systems, but comes with fast-charging and emission-free continuous operation. The road trials planned for the 22-seater shuttle will be between NTU’s Halls of Residence at North Hill and JTC’s CleanTech One, which is part of the Jurong Innovation District where special charging stations have been built.

The first Bluetram was inaugurated on the Champs-Élysées in Paris at the beginning of December 2015 for the Paris Climate Conference (COP21). It was piloted for the rest of the winter, transporting visitors, free of charge, between the Arc de Triomphe and Place de la Concorde. 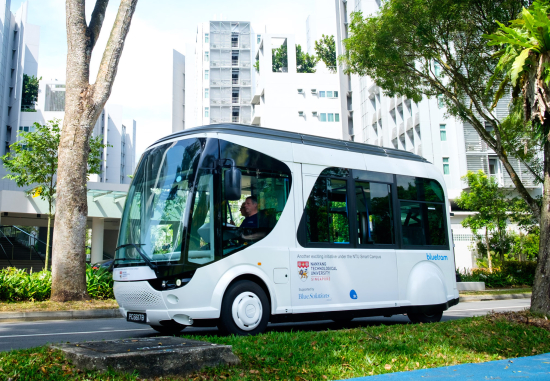 The research partnership with BlueSG will run for two years and is supported by the Economic Development Board, Singapore. As part of the trials, NTU students would also be able to ride the shuttle from the second half of 2018.

The collaboration is also one of the key initiatives under the France-Singapore Year of Innovation, which aims to intensify cooperation on innovation between the two countries in 2018.

Unlike electric vehicles that function solely on batteries, the Bluetram replicates the efficiency of trams by operating continuously without the need for offline charging. Equipped with supercapacitors and a LMP battery developed by Blue Solutions, the shuttle can travel two kilometers on a single charge, with backup power that provides for an additional 30 kilometers.

Furthermore, the costs of operating Bluetram is five to ten times lower than tram systems as it does not require costly infrastructure such as rails or catenary, and a whole line can be deployed in a matter of weeks.

The joint research team comprising scientists from NTU’s Energy Research Institute (ERIAN) and BlueSG will study the actual on-road performance of the Bluetram in Singapore’s tropical climate, including the user behavior of passengers.

As part of NTU’s Smart Campus initiative, the university is also in talks with BlueSG to install electric vehicle car-sharing stations. These will also add to the existing pool of electric vehicle charging stations around campus. Students, staff and faculty will be able to rent a BlueSG vehicle and can drive it around Singapore and return the vehicle to any BlueSG charging station. Members of the public can also drive into NTU’s campus using the convenience and flexibility of the BlueSG program.

This is part of BlueSG’s ongoing expansion of its charging stations island-wide.

With build-in flash charge capacitors + batteries, those small e-buses could be ideal for city cores, when equipped with driverless facilities, to reduce operation cost and to make them more competitive..

20 kWh of titanate batteries will charge in a few minutes with a large battery bank charger.