Hydro has started producing the first aluminium metal at its technology pilot in Karmøy, marking the start of verifying at an industrial scale the HAL4e aluminium technology. Compared to the world average, the Hydro-developed technology will use 15% less energy in aluminium production and has the lowest CO2 footprint.

Hydro began the HAL Ultra R&D initiative in 2010, with the long-term vision of being able to produce aluminium at a specific DC energy consumption of only 10 kWh/kg without net CO2 emissions. The technology pilot is designed with an annual production capacity of approximately 75,000 tonnes, consisting of 48 cells running on the HAL4e technology (12.3 kWh/kg) and 12 cells using the latest HAL4e Ultra technology (11.5-11.8 kWh/kg). This is well under the world average of 14.1 kWh/kg aluminium and Hydro’s own average of 13.8 kWh/kg aluminum. 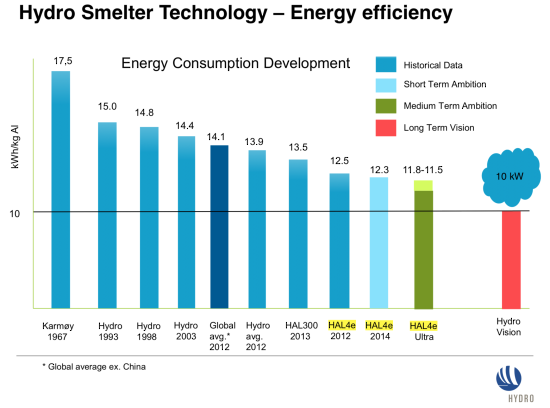 Compared with the technology used in Hydro plants in Sunndal and Qatar, the new pots will be 50% larger and produce 50% more metal from each pot, while also using less energy per kilo produced. 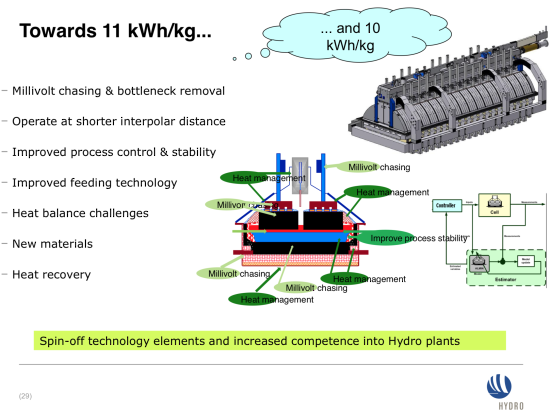 The technology pilot consists of physical technology elements and a much improved process control system. Several of these elements can be tailored for and used in Hydro’s existing aluminium plants.