Sendyne Corp., a leading provider of sensing, modeling/simulation, and control products, has introduced CellMod, the first Li-Ion battery simulation tool that can predict cell and pack behavior with a percentage of error of less than 5% under a wide range of test conditions.

Unlike empirical models often used today, CellMod is a true physics-based model. It considers physical processes occurring inside the cells, such as diffusion in solids or, electrolytic solution, reaction kinetics, charge transport, heat transport, etc. Hence CellMod can predict future battery cell behavior with a high degree of accuracy. CellMod can be used for rapid prototyping, cell selection, and predictive control within a BMS.

The model is coupled with Sendyne’s proprietary dtSolve, a tool that executes several orders of magnitude faster than other commercially available numerical solvers. A simple API allows any simulation platform to provide inputs and read the outputs of the model.

The software may be used as a standalone tool or can be integrated with other simulation packages for whole system co-simulation via the Functional Mockup Interface (FMI), an open standard supported by all major simulation platforms. 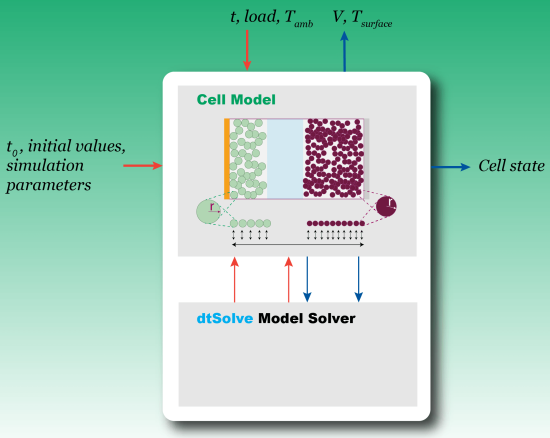 CellMod can be quickly adapted to represent any type of Li-Ion cells, from NMC and LMO to LFP and NCA, and all iterations of these cells. To achieve this, only a simple (non-proprietary) set of experimental data on the cell to be modeled is needed. Sendyne’s tool kit, which includes state of the art parameter extraction, then creates a unique CellMod version for a specific cell. All unique CellMod versions are created under NDA.

Currently deployed by a Tier-1 US battery maker, CellMod’s uses include battery cell rapid prototyping. This reduces design time and costs, as each cell design can first be tested using the model. Design makers can utilize the model to select cells and vendors based on how well candidate cells perform in particular applications.

Further, CellMod can help reduce cost—a major challenge to large scale battery adoption. The compact nature of the CellMod-dtSolve bundle allows it to be embedded on a microcontroller within a Battery Management System (BMS) for real time predictive control.

For large-scale battery systems, such as those used by electric vehicles and energy storage systems, multiple instances of the model, equal to the number of cells in the pack, can run simultaneously in real time. Little computing power or memory is required. By replacing the typical empirical models/Kalman filters with a highly accurate model enabling true predicative control, pack safety can be greatly improved and costs due to over-design can be eliminated.