Chubu Electric Power Co., Inc. and Toyota Motor Corporation have agreed to start a verification project that entails construction of a large-capacity storage battery system that reuses electrified vehicle batteries, as well as examination of the recycling of used batteries.

The two companies aim to reuse batteries collected from electrified vehicles (hybrids and EVs) manufactured by Toyota as a storage battery system for utilization in meeting various challenges posed by the electric power system. When combined in large numbers, used batteries, even with reduced performance levels, can be repurposed for energy supply-demand adjustments, frequency fluctuation management, and voltage fluctuation management in distribution systems, all factors that accompany the widespread introduction of renewable energy. 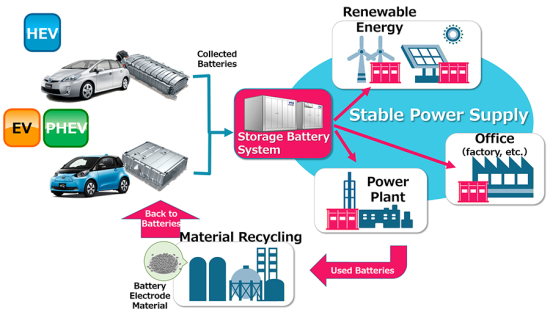 In FY 2018, Chubu Electric Power and Toyota will commence verification of the Storage Battery System. Based on the results of the verification test, the two companies aim to introduce power generation capacity of approximately 10,000 kW, equivalent to 10,000 batteries, in FY 2020.

The two companies will consider establishing a mechanism to recycle reused batteries by collecting materials such as rare-earth metals and re-utilizing them.

Not only can these efforts serve as a solution to address the challenges within the electric power system, Chubu Electric Power and Toyota expect these efforts to have positive effects in the operation of thermal power plants.