The new Qualcomm Safety Car BMW i8 Coupé made its debut on Thursday in Santiago, Chile. The car will feature from the fourth race in the ABB FIA Formula E Championship, which will take place on Saturday. BMW i has been “Official Vehicle Partner” since the first Formula E season and is now on track with the next generation of the Qualcomm Safety Car BMW i8 Coupé, featuring a range of technical advances.

The new flagship of the BMW i car fleet for the ABB FIA Formula E Championship makes use of the “Qualcomm Halo Prototype Technology” inductive charging system. The system uses no cable connections and charges this special BMW i8 Coupé (combined fuel consumption: 1.9 l/100 km; combined energy consumption: 14.0 kWh/100 km; combined CO2 emissions: 42 g/km) up to 80% in just one hour, with a performance of 7.2 kilowatts. 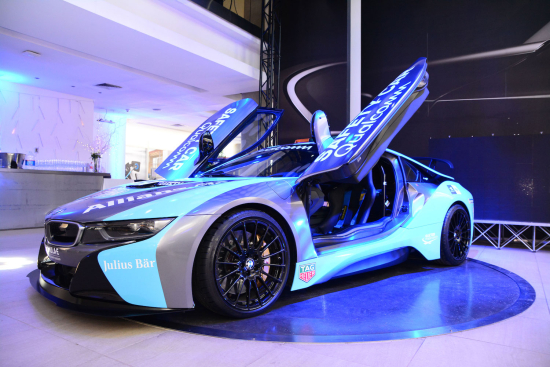 To do so, the Safety Car drives over a special bottom plate, which immediately initializes the wireless charging procedure.

The fuel consumption and CO2 emissions figures shown were determined according to the European Regulation (EC) 715/2007 in the version applicable at the time of type approval. The figures refer to a vehicle with basic configuration in Germany and the range shown considers the different size of the selected wheels and tires.

The CO2 efficiency specifications are determined according to Directive 1999/94/EC and the Pkw-EnVKV, and based (for classification) on the fuel consumption and CO2 values as per the NEDC cycle.