Five Hyundai vehicles completed the journey. Three vehicles are based on Hyundai’s next-generation fuel cell electric SUV NEXO, scheduled to be released in Korea next month, and the other two are Genesis G80 autonomous vehicles. All vehicles are equipped with level 4 self-driving technology, as defined by the SAE international standards, and 5G network technology. 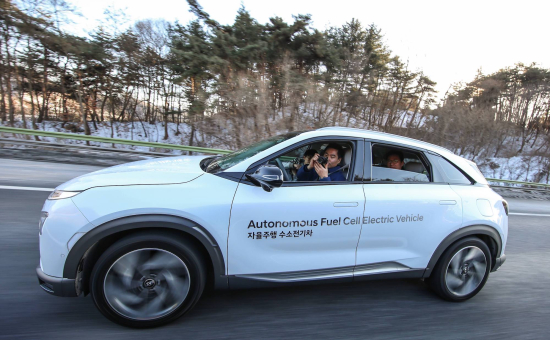 Until now, autonomous driving has been demonstrated only on selected sections of Korean domestic roads and at a limited speed. The Hyundai test marks the first time autonomous vehicles have operated on public highways at 110 km/h (68 mph), the maximum speed allowed by law on Korean highways.

The demonstration took place in Seoul on 2 Feb, with the ‘CRUISE’ and ‘SET’ buttons being pressed on the autonomous-driving steering wheel of each vehicle, at which point the cars immediately switched to self-driving mode and began the 118-mile journey to Pyeongchang.

Building on the successful demonstration of Hyundai’s vehicles which drove autonomously in Las Vegas during the Consumer Electronics Show (CES) early last year, the cars feature a number of advanced technologies that enable them to recognize surrounding vehicles more accurately and make better judgements at junctions and navigate through toll gates by accurately calculating the toll gate’s width and position. The vehicles are also able to pinpoint their position on a map by using external sensors fitted for situations when the GPS signal was interrupted, such as going through underground tunnels.

The exterior and interior of self-driving vehicles used for this demonstration look similar to Hyundai’s other mass-produced models but are installed with additional cameras and LIDARs. Adding a small number of sensors to mass produced vehicles has enabled the realization of fully autonomous driving technology, bringing Hyundai closer to the commercialization of self-driving technology. 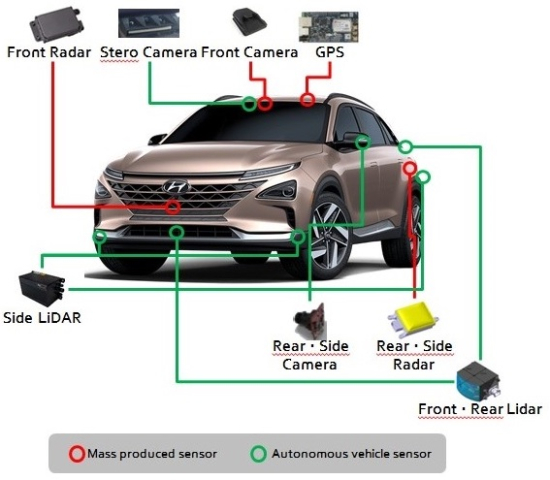 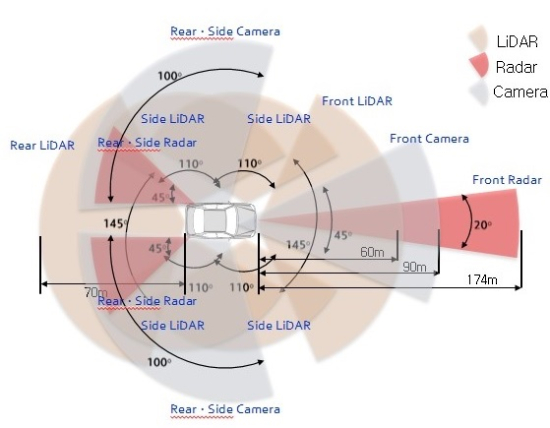 Hyundai has conducted a significant number of highway test drives amounting to hundreds of thousands of miles travelled, which has enabled the accumulation of data to enhance the performance of its self-driving vehicles.

NEXO has a target range of 500 miles (NEDC) on a single charge of hydrogen and takes only five minutes to refuel. NEXO features world-class system efficiency of 60%, durability equivalent to internal combustion engine-driven vehicles and a load space of 839 liters.

Furthermore, since August last year, Hyundai has been researching and building its V2X infrastructure. As a founding member of the American Center for Mobility, a US research institute for future mobility, Hyundai Motor Group last October invested $5 million in the ACM-led construction of state-of-the-art testing facilities.

A hand to Hyundai for an ADV Level IV FCEV and testing it on normal highway drive.

London type e-taxis could be adapted? The extra cost would be quickly recuperated with the drivers pay?

One point brought out in this link is that 5G communication is integral to Hyundai's approach to Level 4 autonomy, with the high data rate an enabler.

In my view it is this sort of thing which makes Tesla's claims that it is currently producing cars with all the hardware needed not only for Level 4 but Level 5 full autonomy on all roads any time any conditions beyond nutty.

And it is selling them on that premise.