The technology has been the subject of active R&D by Ricardo for approximately ten years and has demonstrated the potential to reduce operating fuel costs and fuel usage by, respectively, 20 and 30 percent in comparison with today’s heavy-duty engines (allowing for the financial and energy costs of the liquid nitrogen used by CryoPower in addition to its fuel).

The Ricardo CryoPower split-cycle engine concept redefines the processes of internal combustion to enable significantly improved internal thermal efficiency in comparison with today’s state-of-the-art engines. CryoPower is based on the use of a separate induction and compression cylinder from that used for combustion and exhaust. This enables recovery of otherwise wasted exhaust heat to the working gas after the end of compression. 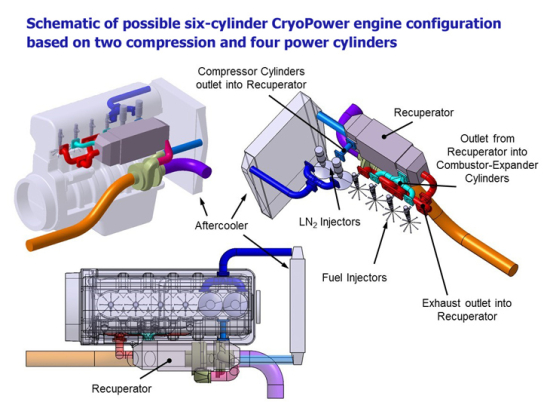 The compression process is carried out isothermally, cooled via the injection of a small amount of liquid nitrogen. The liquid nitrogen is thus both a coolant and an additional energy vector, which offsets some of the fuel requirement.

The combustion process utilizes either renewable or traditional fuels, liquid or gaseous, and delivers heat energy back to the chilled and compressed intake air. Its most important benefit, however, is to enable otherwise unachievable improvements in fuel economy, reduced CO2 and other emissions through improved internal thermal efficiency.

Additionally, by virtue of its entirely new approach to combustion, CryoPower offers the potential for significant reductions in engine-out emissions without compromising efficiency.

In a heavy-duty truck application Ricardo estimates that CryoPower would provide potential operator savings of approximately £9,000 ($12,500) per year for each vehicle, or £180,000 ($250,000) per MW in a distributed power generation application.

CryoPower requires liquid nitrogen to operate, with a usage and refilling requirement broadly in line with that of the fuel used to power the vehicle. Liquified nitrogen is already routinely produced in electrically powered air separation units by the industrial gases industry, both directly and as a by-product of the production of liquid oxygen from air. It is thus readily available.

For commercial reasons, this production process already tends to be operated so as to maximize the use of “wrong-time”, cheaper rate energy, and it would be comparatively straightforward to develop an expanded supply chain for liquid nitrogen based on both on this and on intermittent renewable sources, Ricardo says.

Using liquid nitrogen generated in this way as an energy vector by CryoPower truck engines, would offer one of the most effective pathway by which renewable energy could be deployed in long-haul, heavy freight road-based transportation, Ricardo argues.

CryoPower is a potentially game-changing, commercially and environmentally attractive technology whose time really has come. The development of the conventional heavy-duty engine is reaching the point of diminishing returns with regard to fuel efficiency and CO2; to go significantly beyond the current state of the art requires a completely new approach. CryoPower offers a step-change improvement in both fuel efficiency and operating fuel cost, and the prior development of its crucial enabling technologies has significantly reduced development risk.

It does, however, require further significant investment to take forward to full system demonstration, pilot applications and industrialization. For these reasons, Ricardo has formed Dolphin N2, vested it with all CryoPower assets and IPR, and will retain a minority shareholding. We are now seeking further investors to join us in taking this exciting concept forwards towards commercial development.

Heavy-duty trucks are an essential element of the transportation mix of modern industrialized society. While trucks used in local deliveries or in drayage applications such as in port complexes and distribution hubs, may be amenable to powertrain electrification and hybridization, such CO2 saving opportunities are far more limited for long distance, heavy freight applications, Ricardo suggests.

The key challenges in this respect arise from the cost, mass and package envelope required for high capacity battery systems, which can limit payload and/or range. While battery electric solutions are thus potentially very attractive for shorter haul applications or where payload space is not at a premium, the conventional four-stroke diesel engine remains—almost universally—the power plant of choice for heavy-duty, long-haul trucks.

The commercial vehicles industry expends considerable resources upon the achievement of incremental improvements to conventional powertrain technology, seeking improvements in operating range, payload, cost and emissions. But even if all currently known refinements and technologies are deployed on current state of the art truck diesel powertrains, there remains an effective fuel efficiency limit beyond which further gains become prohibitively expensive and impractical.

"With regulators worldwide seeking further improvements in fuel efficiency and reduced CO2 for this ubiquitous heavy-duty vehicle type, a new solution is needed,..."
The electric drivetrain may be the only solution that meets the requirements.

I agree with you. This seems to add needless complexity.

With 70+% of the energy being waste heat, recovery makes some sense.
They don't need LN2, they have ORC and other methods.

Ricardo solution is too expensive and is limited by the use of liquid nitrogen. Other cheaper solution is more effective being described at
https://www.slideshare.net/giurcal/hybrid-pneumatic-engine-with-exhaust-heat-recovery
This uses the atmospheric air and also recovers the braking energy like a hybrid electric vehicle.