ExxonMobil predicts peak in light-duty vehicle liquid fuels ~2030, but ongoing role for oil in the mix

ExxonMobil’s newly released Outlook for Energy: A View to 2040 anticipates that global energy needs will rise about 25% over the period to 2040, led by non-OECD countries. While the mix shifts toward lower-carbon-intensive fuels, the world will need to pursue all economic energy sources, the report says.

The Outlook projects that global transportation-related energy demand will increase by close to 30% by 2040. At the same time, total miles traveled per year by cars, sport utility vehicles (SUVs) and light trucks will increase about 60%, reaching about 14 trillion in 2040. As personal mobility increases, average new-car fuel economy (including SUVs and light trucks) will improve as well, rising from about 30 miles per gallon (7.83 l/100 km) now to close to 50 miles per gallon (4.7 l/100 km) in 2040.

The Outlook predicts a rise in electric vehicles as well as efficiency improvements in conventional engines, both trends likely leading to a peak in liquid fuels use by the world’s light-duty vehicle fleet by 2030. However, oil will continue to play a leading role in the world’s energy mix, the report finds.

Our in-depth analysis shows that even if every light-duty vehicle in the world was fully electric by 2040, the demand for liquids could still be similar to levels seen in 2013. This is because of growing demand from commercial transportation and the chemical sector.

The growth in transportation energy demand is expected to account for about 60% of the growth in liquids fuel demand. 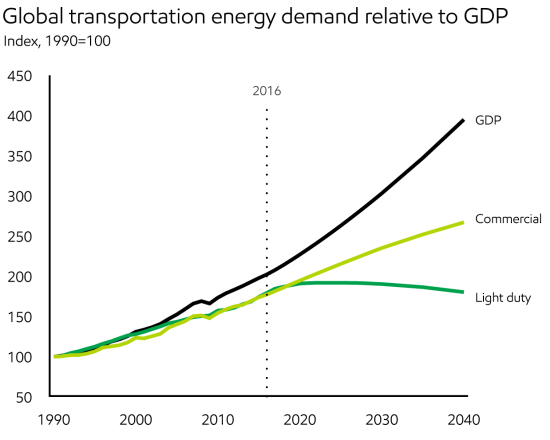 Rising incomes will increase demand for personal mobility in the form of cars and motorcycles, the report projects. Motorcycles, which offer a lower-cost entry point to personal mobility, will see particularly high ownership in Asia Pacific, although the region will also lead significant growth in car ownership. In the OECD, while total vehicle ownership increases significantly, the number of cars per 1,000 people increases only about 10%.

Were this increase in demand realized with the current fleet mix and fuel efficiency, there would be a significant increase in energy demand for personal mobility. However, major gains in the fuel efficiency of conventional vehicles leads to a major reduction in the energy needed.

The Outlook suggests that changes in the fleet mix (e.g., increasing hybrids and electric vehicles) play a much smaller role in limiting energy demand for light-duty vehicles. Nevertheless, the report predicts stron electric fleet growth driven by decreasing battery costs, increasing model availability and continued support from government policies. In total, full hybrid, plug-in hybrid, and electric-only vehicles will be approaching 40% of global light-duty vehicle sales in 2040, compared to about 3% in 2016, according to the report.

However, since future battery costs and government policies remain uncertain, there is a wide range of perspectives on future electric vehicle growth. Third-party estimates for 2040 range from a factor of three higher and lower than the Outlook’s. 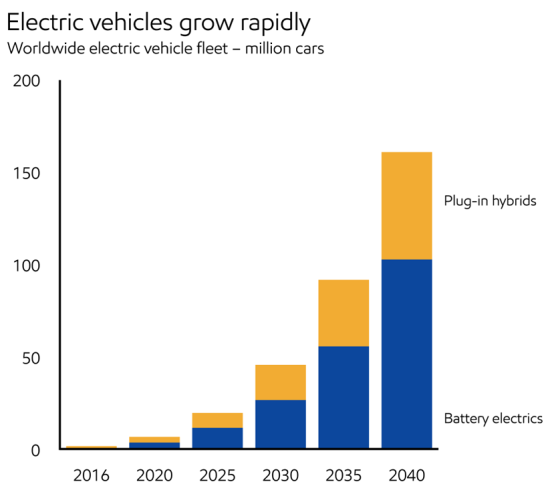 However, the report observes, recent consumer preferences have slowed the increase in fuel efficiency of new vehicle sales in both the OECD and non-OECD. Thus, while the Outlook forecasts new car fuel efficiency trends will be well aligned with government policies, a continuation of recent trends in consumer preferences could add more than 2 million barrels per day of liquids demand by 2040. 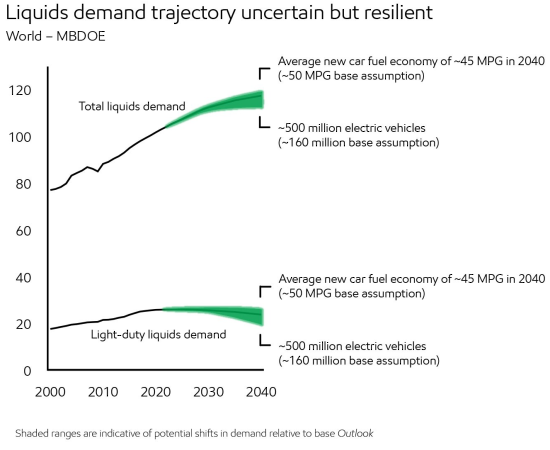 Other key findings from this year’s Outlook include:

The Energy & Carbon Summary and a new special section in the annual Outlook include consideration of the impact on future energy demand from an analysis of multiple lower-carbon scenarios published by the Stanford University Energy Modeling Forum. The forum’s scenarios are publicly available and are used for analytical purposes, including by the UN’s Intergovernmental Panel on Climate Change.

The global scenarios assessed by ExxonMobil, which include a full range of energy technologies, contemplate limiting global greenhouse gas (GHG) emissions to have a likely chance of holding atmospheric concentrations to the equivalent of 450 parts per million CO2 in 2100; these scenarios are generally considered to be consistent with pathways that would limit global average temperature rise in 2100 to 2 ˚C above pre-industrial levels.

All energy sources remain important across the assessed 2 ˚C scenarios to 2040. As a result of ongoing demand coupled with natural hydrocarbon field decline, trillions of dollars of additional investment in oil and gas production will be required, including to meet a 2 ˚C pathway. Based on the average growth rates of assessed 2 ˚C scenarios, natural gas demand is estimated to increase to 445 billion cubic feet per day by 2040; oil demand is estimated to decline to 78 million barrels per day by 2040.

May 2017: Tony Seba sez virtually all auto purchases will be BEV in 2025 and the global oil industry will collapse as a result.

My bet is with XOM, but there's 7 years yet to determine the winner.

If (or when) Exxon's researchers come to the same conclusion as Tony Seba will Exxon make it public before they began divesting of so called "stranded assets"? I doubt they will be in any great hurry to make unnecessary predictions that could negatively affect their businesses or secret strategies. I don't blame Exxon and the other big oilco's from publishing the most optimistic scenarios from their perspective because what would be the advantage in doing otherwise?

My guess is that BEV's and PHEV's will be adequate in terms of price and range for 20 % of the market long before 2040, and if they are adequate for 20% then they should be adequate for 80% of the applications, and therefore if there truly is an urgency to reduce CO2 emissions then governments will be strongly compelled to implement policies and regulations that encourage the adaption of zero and low CO2 emission mobility. Some of the more freedom-loving parts of the world will be more resistant to change, but that seems like futility to me.

If they are freedom loving they should love to be free from the clutches of oil.

Hard to determine how biased any study by Exxon really is; and, how much you should you believe? Don't forget that Exxon says Climate Change is real based on their own 1980's scientific studies. Unfortunately, The issue is a political football, especially when the POTUS denying it's true and appoints a cabinet of fossil fuel chiefs to run the Government. I for one would like to see the transition to clean energy accelerate to meet the Tony Seba timeline.

Why would demand for liquid fossil fuels decrease for the light land vehicle fleet but keep growing for the heavy fleet? For trucks, taxis and buses, renewable technologies are even more economical than for personal cars:
* The greater vehicle use of commercial vehicles offsets the vehicle cost faster
* Fleets allow economies of scale such as electric battery swapping and dedicated refueling or recharging stations
* Trucks and buses have predictable locations for refueling or charging
* Cities want to reduce particulate and noise pollution by trucks and buses
* Frequent stops by city buses, delivery truck and garbage trucks allow use of capacitors recharged at every stop

Some of these considerations also apply to ships.

As for air transport, many start-ups plan to produce short-distance electric planes. Long-distance plane carriers have mentioned they will try using renewable fuels. But I would guess their use of fossil fuels will grow unless it is regulated.

There is heated research in renewable electricity generation and storage, and costs are decreasing faster than the improvements in efficiency of internal combustion engines. The cost of fuel extraction will grow in the medium term, even if it decreases in the short term with the opening of new areas for drilling.

It's up to us all to demand of our governments to outlaw new oil and gas drilling, penalize drilling accidents and pollution, subsidize research and deployment of renewable energy and building insulation, and mandate improvements in efficiency.

So they were lying to us when they said limiting fossil fuel use would ruin the economy? I'm shocked, shocked I tell you. :/

Of course there are alternatives that don't require fossil fuel extraction or mining and spreading toxic nuclear materials but the powers that be want to keep the status quo including the nuclear and other armament industries.