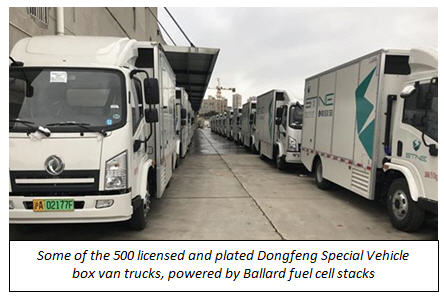 Each box van truck is manufactured by Dongfeng Special Vehicle Co. Ltd., measures 6.4 meters (21 feet) in length, can carry a load of 3.2 tons and has an expected range of more than 330 kilometers (205 miles).

The trucks will be operated by Shanghai Sinotran New Energy Automobile Operation Co., Ltd., a newly established fuel cell electric vehicle operator, and are expected to be used primarily for intra-city deliveries of goods.

Ballard and Re-Fire have entered into a collaboration agreement under which Re-Fire has agreed to use Ballard-designed fuel cell stacks in its fuel cell systems. Ballard’s FCvelocity-9SSL stacks are now being manufactured and are available from Guangdong Synergy Ballard Hydrogen Power Co., Ltd., Ballard’s joint venture in Yunfu, Guangdong Province.

Re-Fire has developed a leading position as a system integrator in the fast-moving Chinese fuel cell transportation market. We are pleased to be collaborating with Re-Fire as we drive market adoption of fuel cell electric vehicles—or FCEVs—incorporating Ballard fuel cell technology. We believe this is the largest planned deployment of fuel cell-powered trucks anywhere in the world. It is not surprising that this is happening in Shanghai given that city’s leadership in the commercial adoption of FCEVs.

With the integration work completed in late-2017, and all 500 commercial trucks having received green license plates for new energy vehicles in Shanghai, we are now preparing for vehicle launch. We expect to deploy all 500 trucks in 2018, subject to parallel activities, including appropriate scaling of fueling infrastructure and our service platform.

Two recently-constructed hydrogen refueling stations are currently operating in Shanghai, with two additional stations planned for completion in the first half of 2018. As per the “Shanghai Fuel Cell Vehicle Development Plan”, a total of 5 to 10 hydrogen fueling stations are planned by 2020.

China is forecasted to account for approximately 42% of global production of medium- and heavy-duty trucks in 2020, or approximately 1.1 million units, according to LMC Automotive.

Would battery only enthusiasts like to tell us how these 500 trucks compare to the massive deployment of Tesla semi trucks in 2018?

Good to see Ballard in the game, they improved the tech in the 90s.

The positive here is that's 500 less ICE trucks polluting the air. And, this would be even more positive if the hydrogen could be created by electrolysis and not derived from fossil fuels. Ballard's stock jumped 17% on the news.

OK, there will be no massive deployment of Tesla semi trucks in 2018 and probably not in 2019 either but maybe a few will make it on the road. A better bet is the electric version of the Mercedes/Freightliner Electric Sprinter and the Cummins battery electric semi-tractor. Basically, you do not need fuel cells for in-city delivery where the typical range requirements is about 70 miles.

The whole problem with fuel cells is producing, compressing, and storing hydrogen. Depending on whose numbers you use, the overall energy efficiency is about 30 to 40 percent of using a battery electric vehicle if you are using electrolysis. If you are using natural gas reformation, you might as well run a natural gas internal combustion engine.

The whole point is to cut pollution not just transfer the source. China certainly does not have a surplus of clean power and continues to burn coal for most of their power.

might as well run a natural gas internal combustion engine...

No, combustion of NG create NOx.
Reforming NG allows sequestration for use later as carbon fiber.

Cummins Westport Inc. has received certifications from both the US Environmental Protection Agency (EPA) and Air Resources Board (ARB) in California for its 2018 L9N and B6.7N natural gas engines. Both engines meet California ARB optional Low NOx standards, as well as 2017 EPA greenhouse gas emission (GHG) requirements, making them some of the cleanest engines available today for truck and bus customers.

When is the CO2 to carbon fiber going to be commercial? How much carbon fiber do we need and much energy does this process take?

Fiber Forge has shown ways to mass produce carbon fiber.
You need carbon and CO2 has it.

Apparently, Fiber Forge went bankrupt several years ago. Anyway, if you put enough energy into it you can probably turn CO2 into diamonds. Anyway, the energy required to turn CO2 back to carbon and oxygen is cosiderably more than the energy that was released going from carbon and oxygen to CO2. About the only energy and cost efficient way to turn CO2 back into carbon is photosynthesis.

Small, medium and large size, affordable, mass produced FCEVs may come (mainly) from China, SO-Korea and Japan in the next 5 years or so.

EU countries may not be far behind?