Mercedes-Benz Cars has laid the cornerstone for the assembly hall of its “Factory 56” in Sindelfingen, the company’s “car plant of the future”. Factory 56 combines three trend-setting features: digitalization, flexibility and green production.

In 2020, the Factory 56 will begin production of upper- and luxury-class cars and electric vehicles and robo-taxis. These include the new generation of the S-Class as well as the first electric vehicle of the product and technology brand EQ made in Sindelfingen. To prepare the construction site, 700,000 m3 earth was moved; the area is 220,000 m2. Approximately 6,400 tons of steel are being used for the steel construction—almost as much as for the Eiffel Tower. 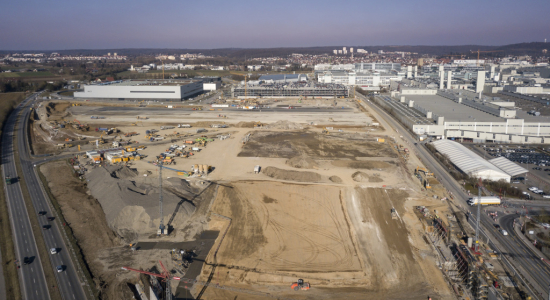 The production concept of Factory 56 includes man-machine-cooperation and digitally supported processes including work organization as well as logistics and quality assurance. The plant is not only digitized consistently according to the principles of Industry 4.0, it is also connected to other productions in the Mercedes-Benz global production network.

360-degree linkage along the whole value chain is an essential feature—from suppliers, through to the development department, design and production and to customers. In the future, for example, the finished vehicles will drive off the line automated to the loading station.

Driverless transport systems (DTS) with product baskets support logistics in the assembly and ensure the seamless supply of the required materials for the employees at the line. Innovative Radio Frequency Identification-technologies (RFID) are integrated into Factory 56. Components and vehicles can thus be digitally tracked and linked with one another.

Artificial Intelligence, Big Data analyses and Predictive Maintenance enable high transparency and support in production planning, control and also in quality assurance. Through the analysis of existing production data, for example, predictions on potential faults or due maintenance work can be made in advance.

The employees work at ergonomically optimized workstations and are optimally supported in their tasks by digital tools. The focus is on the use of intelligent, flexible technology. A new work organization provides for flexible and modern working time models. The break areas are designed according to the latest standards—e.g., with a pantry, couch and info screen.

Modular building structures are characteristic for Factory 56, with a design that is both energy-efficient and green. The assembly uses renewable energies and reduces CO2 production, water consumption and waste significantly, the company says.

A rooftop photovoltaic system feeds green electricity into the productions supply. This leads to a reduction of yearly 5,000 MWh of electricity. An electric vehicle of the product and technology brand EQ, for example the electric SUV EQC, could be charged 72,000 times a year with this. That corresponds to around 36 million kilometers a year. CO2 emissions at the Factory 56 will be reduced by 75% compared to today’s S-Class production in Sindelfingen, the company said.

The construction of the assembly hall is very translucent. The Blue Sky architecture supports a pleasant working climate for the employees in daylight. In addition, the temperature of the hall can be set at up to seven degrees below the outside temperature.

Mercedes-Benz Cars Operations is responsible for passenger car production at more than 30 locations around the world; three of these are currently being established. Within a flexible and efficient production network with around 78,000 employees it includes the central functions of production planning, TECFACTORY, logistics, and quality.

Mercedes-Benz Cars produced more than 2.4 million Mercedes-Benz and smart passenger cars last year, marking the seventh record in a row. The network is based on the product architectures of front-wheel drive (compact cars) and rear-wheel drive (for example the S-Class, E-Class, and C-Class) as well as the SUV and sports car architectures. In addition, there is a powertrain production compound (engines, transmissions, axles and components).

Each of these production compounds is grouped around a lead plant that serves as a center of competence for the ramp-up of new products, technology and quality assurance. Mercedes-Benz Cars is building electro hubs for the production of electric vehicles and batteries.