The basic function of any transmission system is to achieve transmission efficiency, high-efficiency engine ranges, and highly responsive gear changes. To improve these functions, Toyota has striven to reduce mechanical loss, adopt a wider gear range, and improve shift tracking. These initiatives have resulted in a direct and smooth driving experience with superior fuel efficiency, which has been improved by 6% over the existing transmission system. 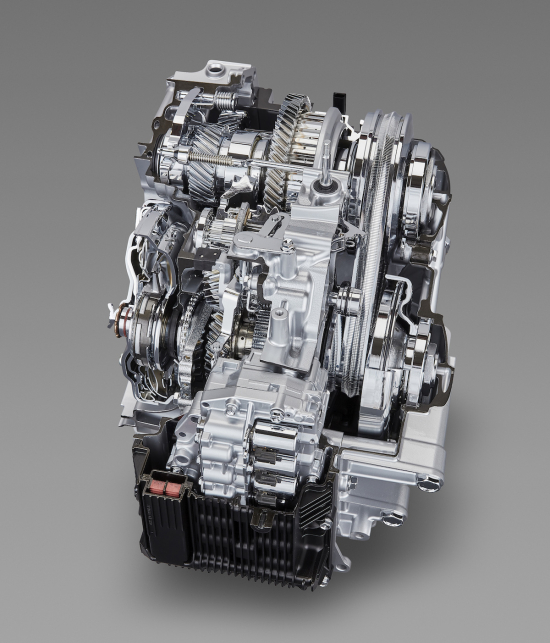 Reduced mechanical loss. The new powertrain unit features the first launch gear in a passenger vehicle CVT, which facilitates improved transmission efficiency in lower gear ratios where belt efficiency is poor. By adopting launch gears, it is possible to improve belt efficiency and increase ratio spread by 15% without performance deterioration.

The transmission system utilizes gear drive when starting from a full stop, resulting in powerful acceleration while at the same time resolving the momentary sluggish feeling that was previously present during accelerator operation. Both smooth and comfortable launch performance are realized. When switching from gear drive to belt drive, the transmission system uses highly responsive gear change control technologies cultivated from AT technology. 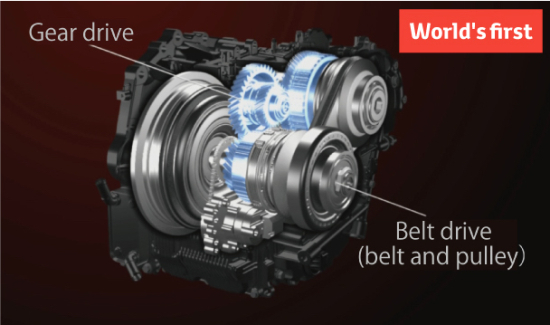 Improved shift tracking. The adoption of launch gears results in reduced input load. This enables the size of both belt and pulley components to be reduced. The belt angle has been narrowed and pulley diameters reduced, resulting in shifting speeds that are 20% faster. Both powerful and rhythmic acceleration are realized. Shift responsiveness has improved through downsizing of the pulley and reduction of inertia by 40%.

Toyota has also developed a new manual transmission in response to global needs, particularly those in Europe. Compared to the existing version, the mass of the new system has been reduced by 7 kg (15.4 lbs) and total length by 24 millimeters (0.9 inces). This makes it one of the world’s smallest transmissions, and its small size contributes to improved fuel efficiency. 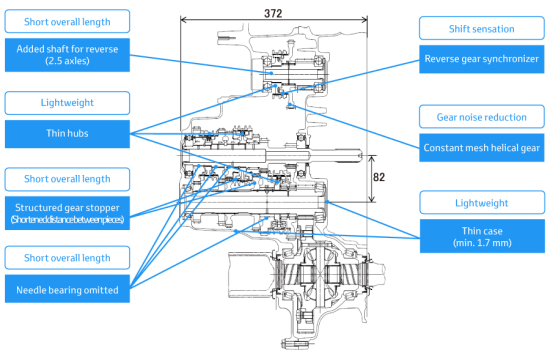 Toyota’s new Dynamic Force Engine adopts high-speed combustion technologies and a variable control system. It also achieves greater thermal efficiency, resulting in high output, due to a reduction in energy loss associated with exhaust and cooling systems, the movement of mechanical parts, and other aspects.

As a result, the newly developed 2.0-liter gasoline vehicle and hybrid vehicle engines achieve world-leading thermal efficiencies of 40% and 41% respectively. In addition, compared to existing engines, the new engines achieve increased torque at all engine speeds—from low to high rotations—and will comply with expected future exhaust regulations in each country in advance.

Some of the new technologies applied in the 2.0-liter engine include:

To improve thermal efficiency and fuel economy, the high-speed combustion technology in the engine features a long stroke; a widened angle between the intake and exhaust valves; a high-efficiency intake port with a laser-cladded valve seat; a high compression ratio (14); high-energy ignition coil; new D-4S injection; and a multi-hole direct injector.

The new Power Control Unit (PCU) is 20% smaller, and 10% lighter than the conventional 1.8-liter model, which allows it to be placed directly above the transaxle. 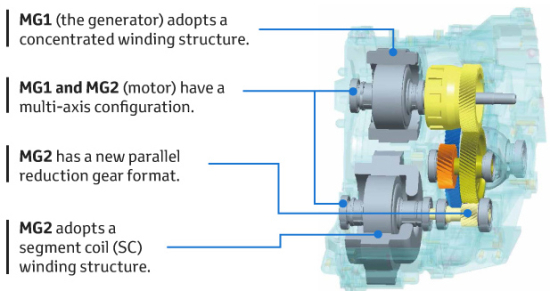 The new Dynamic Torque Vectoring AWD system is used in gasoline engine vehicles. By adopting a torque vectoring mechanism, which independently distributes torque to the left and right rear wheels according to driving conditions, the Dynamic Torque Vectoring AWD system enables the driver to steer the vehicle exactly as intended. It achieves high off-road performance even on the toughest roads.

It also incorporates a disconnect mechanism, which features the first ratchet-type dog clutches on both the front and rear wheel shafts. These clutches stop the drive system rotations, which transmit driving force to rear wheels when in 2WD mode, significantly reducing energy loss and improving fuel efficiency.

The new E-Four system will be used in hybrid vehicles. The system increases total torque to the rear wheels—which are electrically driven—by 30% compared to existing versions. By adopting a new control system that optimally distributes torque to the rear wheels based on the driving conditions, the E-Four system offers high off-road performance, handling, and stability.

Within the next five-years to the end of 2023, Toyota aims to have TNGA-based powertrain units installed in approximately 80 percent of Toyota-brand and Lexus-brand vehicles sold annually in Japan, the United States, Europe, and China. Toyota forecasts that the TNGA-based powertrain units alone will improve fuel efficiency enough to reduce CO2 emissions from Toyota vehicles by more than 18%.

Can't help but wonder why all this mechanical goodness is appearing when ICEs are being replaced by e motor technology. Don't be confused by thermal efficiency numbers of 40% plus; that a ratio of the potential heat energy by the amount of work plus unused heat produced, much of which is lost in the exhaust and radiator. ICEs still have a low 20-27% efficiency rating at the output of the engine, at best.

HEVs and PHEVs and the environment will benefit from higher performance power trains for at least another 15 to 30 years?

Many Toyota's near future HEVs will do 60+ mpg and many Toyota future PHEVs will do up to 120 empg, depending on battery pack size and weight?

Flying autonomous multi-rotor electric passenger drones are become a commercial reality with the EHANG184 and more. Even big aerospace is developing hybrid electric commercial passenger and cargo aircraft to clean up airports of fumes normally emitted during heavy thrust turbine firing at taking levels. Noise, fumes, vibration and harshness all reduced with electric assisted takeoff. Energy recovery when landing can slow the aircraft down by charging the batteries, running the electro-turbine fans as generators. Once aloft a switch to series hybrid mode & direct thrust output means that waste energy can be scavenged & saved in the batteries while cruise speeds enable the turbines to burn cleanly & efficiently.

ICEs will be with us for several more years, why not make the best of it? EVs may not need expensive development, but they need resources that we can't easily get for yearly production of 70+ million cars worldwide, that is the reality.

Why is Toyota still building CVTs? Yes, they let the engine run in a more efficient mode but not enough so that a 9 or 10 speed lockup convertor or dual clutch transmission would be just as good. The CVTs are continuously slipping and wearing anytime that they are transmitting power while the other automatic transmission only have slip and wear during the shifts.

When you calculate EV efficiency, factor in grid generation at about 40%.

If average EVs efficiency is around 40%, with current USA's e-energy production mix and PHEVs are around 36%, Americans do not have much to gain with BEVs over PHEVs?

Of course, it all depends on average distance travelled on electricity with PHEVs.