Researchers at the University of York (UK), with colleagues from the University of Leeds, University of Cambridge and Université Aix-Marseille in France, have identified more than 20 members of an uncharacterized family of lytic polysaccharide monooxygenases (LPMOs) (earlier post) by investigating the digestive proteome of Thermobia domestica—the firebrat, a small hexapod related to the silverfish.

Published in an open access paper in Nature Communications, the research suggests that the ability of these insects to efficiently digest cellulose could be exploited for industrial processes, such as the production of sustainable low carbon fuels to cut greenhouse gas emissions associated with fossil fuel use. 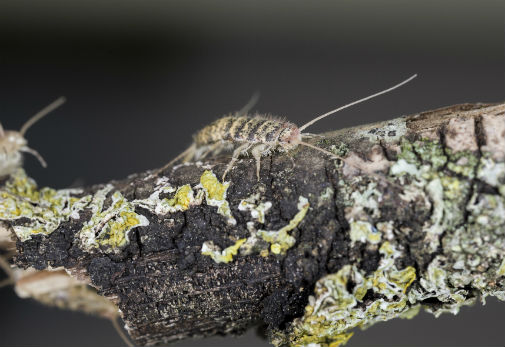 In recent years, understanding of biological biomass degradation has been overturned by the discovery and characterization of copper-containing lytic polysaccharide monooxygenases (LPMOs). LPMOs are now known to play a pivotal role in the breakdown of polysaccharides such as cellulose and chitin by catalyzing the oxidative, as opposed to hydrolytic, cleavage of glycosidic bonds. In this way, the initial chemical and physical recalcitrance of the polysaccharide is overcome, thereby making the substrate tractable to hydrolases. Indeed, such is the effect of LPMOs that they are now included in commercial biomass saccharification cocktails, driving large advances in the environmental and commercial sustainabilities of second generation biorefineries. Until now, only LPMOs from bacterial, fungal, or viral genomes have been characterized, with a predominant interest in their industrial applications toward bioethanol production.

Commonly known as the firebrat, Thermobia domestica is a detritivorous insect related to the silverfish and belonging to the order of Zygentoma, one of the most primitive groups of insects that appeared on land during the Devonian Period (420 million years ago). These animals can efficiently digest crystalline cellulose at rates comparable to cows and termites, but unlike these animals, digestion in firebrats is accomplished without microbial assistance, thus making the endogenous proteins responsible for biomass utilization of significant importance to both evolutionary entomology and industrial biotechnology.

Here, we report the investigation into the digestive enzymes from T. domestica, which we show include members of an uncharacterized family of endogenous LPMOs. Phylogenetic analysis reveals that this family is widespread across Phyla not previously known to possess LPMOs, including algae, oomycetes, and complex animals, and is active on both cellulose and chitin. In-depth biochemical, structural, and spectroscopic data, gene expression patterns, and gene suppression phenotypes suggest that these ancient LPMOs play crucial roles in arthropod development and food digestion, and represent a new range of tools to help tackle major challenges in agriculture and public health.

Until now it was a mystery how firebrats had found a way to digest cellulose so effectively. In looking at their digestive system, the scientists discovered something they weren’t expecting.

Dr. Federico Sabbadin, from the University of York’s Department of Biology, said that the team found that the firebrat gut contains a group of uncharacterised proteins that make up 20% of their carbohydrate digestive enzymes. These proteins proved to be a lytic polysaccharide monooxygenases (LPMOs), which attack crystalline polysaccharides. The study showed that these enzymes are used by firebrats to greatly increase the rate of cellulose digestion.

Previously, LPMOs were only known to occur in fungi, bacteria and viruses, but analysis of this new family showed it was widespread among invertebrates.

Scientists suggest that it is possible that these enzymes could be adopted in industrial processes to break down cellulose into fermentable sugars for biofuel production. The enzymes could also have implications for pest control.

These digestive LPMOs appear to have evolved from enzymes that digest a substance called chitin, which protects the respiratory system of insects. We found that these ancestral genes are essential for metamorphosis and that interfering with their function is lethal to insects. This could have important implications for the development of new methods to control disease-carrying mosquitoes and agricultural pests such as locusts.